The Oldest Indoor Shopping Mall Is in This Ohio City 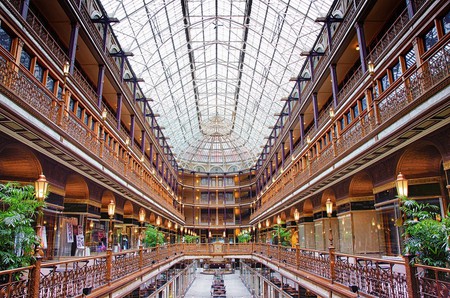 You can still shop at the first indoor shopping mall in the U.S. The Arcade, in Cleveland’s historic downtown district, is a 19th-century landmark and remains one of the most picturesque shopping and dining destinations in Ohio.

In 1890, the nine-story Arcade was constructed on Cleveland’s East 4th Street by the Detroit Bridge Co. and two developers, who modeled it after Milan’s famous Galleria Vittorio Emanuele II. The Arcade, which was partly financed by John D. Rockefeller and other highly respected investors for $875,000 (a massive sum in the late 19th century, which would amount to around $24 million today), was the first indoor shopping mall in the U.S.

The mall quickly became a notable destination for fine dining, luxury services, and high-end shopping, and for its stunning aesthetic, complete with a sprawling 300-foot (91.4-meter) glass ceiling and skylight made of 1,800 panes of glass, two attached 10-story office towers, and gold-finished iron balconies from which shoppers could enjoy picturesque views of the lengthy, narrow floors below lined with boutiques. Accordingly, it was the first building in Cleveland to be included on the National Register of Historic Places in 1975. 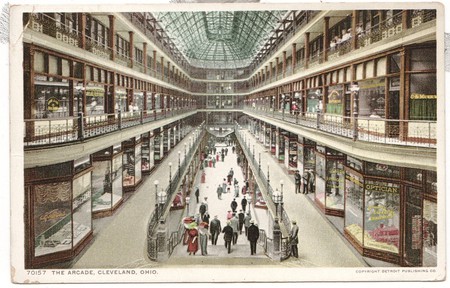 In the latter part of the 20th century, The Arcade began to decline. Profits fell, and parts of the building started to fall into disrepair. It underwent renovations for the first time in 1939 to reinforce the building’s structure and beautify one of the entrances. Still, The Arcade began to be less of a hot spot for wealthy Cleveland locals, and many feared the domed architectural jewel would be torn down.

After a massive campaign from locals and investors who didn’t want to lose the historic architectural beauty, The Arcade underwent a $60 million renovation in 2001. Its original glass ceiling and iron railings, both of which make the building a favorite for photographers and weddings, were kept intact, and The Arcade is instantly recognizable from its earliest images.

Today, the top floors of the Cleveland Arcade house the Hyatt Regency Cleveland, a fine hotel with a classic retro bar and 293 spacious rooms. The lower floors more closely resemble the original arcade and are home to a number of shopping and dining destinations, including an international art gallery, several boutiques and gift shops, a photography studio, and a clothing store.

Martinis, famous peanut butter hot chocolate, and a full menu of comfort food are available at the Chocolate Bar on the first floor, as is a full-service food court that features pizzas, sandwiches, and coffee for local businesspeople on lunch breaks and daily shoppers. Cleveland’s Tower City Center, another historic shopping and dining center, and the Rock and Roll Hall of Fame are within walking distance.

The Arcade is especially stunning at Christmas, with the banisters strung up with twinkling lights and pine garlands, and a giant Christmas tree serving as a looming centerpiece on the main floor. Still a favorite of tourists and locals alike, The Arcade makes for a perfect stop along a holiday shopping trip for photo ops and gift hunting. It’s also a relaxing day destination before a night out at the nearby House of Blues, the East 4th Entertainment District, or Playhouse Square—a theatre and arts hub.