The 10 Best Craft Breweries In Ohio

One of Ohio’s biggest industries for two centuries (even during Prohibition), the beer trade was dead by the late 20th century. Nowadays craft beer establishments throughout the state make world famous beers. Discover 10 of the finest Ohio craft breweries with our guide to the state’s breweries, brew pubs and major manufacturers. 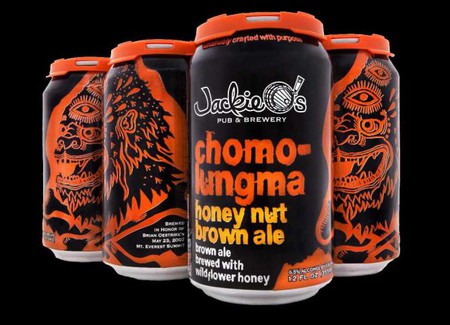 Pub, Pub Grub, $$$
Facebook
Email
Twitter
Pinterest
Copy link
Share
Jackie O’s has made a distinct name for itself in the Ohio area and beyond. Their beers first gained wider recognition when they were featured on the cover of Beer Advocate. Anyone who tastes their signature brews like their Dark Apparition stout, their Chomo-lung-ma Honey Nut Brown Ale, or their Mystic Mama India Pale Ale cannot help but rave about them and their deep complexities.

Bar, American, $$$
Facebook
Email
Twitter
Pinterest
Copy link
Share
Located in the heart of Columbus’ historic brewing district, the Columbus Brewing Company is a staple in the area. Offering far more than their own excellent beers, however, a visit to the CBC allows you a taste of all that the Ohio scene has to offer. Alongside their menu of superior made-from-scratch bar food is a beer selection featuring a selection of the state’s best beers on tap, including three of their own brews alongside these finest selections from The Buckeye State.

Starting life in Pittsburgh, it was their expansion into a second site in Ohio that really saw Fat Head’s come into its own as a major presence in the craft beer industry. In the first three years, they produced 5000 highly acclaimed barrels, and things have only got bigger, better and fatter from there. Ohio is now home to their full-scale brewery, and they have grown to a mini franchise with mighty beers across four locations – two in Ohio, the original site in Pennsylvania and another in that other craft beer hub, Portland, Oregon.

Celebrating 20 years in the industry, The Brew Kettle retains its dedication to quality beers with personality even as their production increases exponentially. Originally known as the Ringneck Brewing Company, its name change to The Brew Kettle gives an indication of the craft credentials that are at the heart of every milliliter of beer produced by the company. Sample their wares or buy a home brewing kit to create Brew Kettle beer in your own brew kettle.

Major competitors in the World Beer Cup with a cabinet full of awards from the prestigious competition, Thirsty Dog’s offer some of the most critically acclaimed beers in Ohio. Their dedication to the finest ingredients producing hand crafted beers in small batches make for beers difficult to match, a region of unique tastes that have kept Thirsty Dog thriving for many years.

Market, Beer, Pub Grub, $$$
Facebook
Email
Twitter
Pinterest
Copy link
Share
Difficult as it may seem today, when Great Lakes began brewing in the mid-80s, there was no such thing as a beer industry in Ohio. The final production brewery in the state had closed its kegs half a decade ago, and the craft beer revolution simply did not exist. This did not stop two beer visionaries from forming the Great Lakes Brewing Company. From early days when they had to cap by hand to the major industry they have since begun, every brewer in the state owes a debt to the Great Lakes.

A community project, MadTree Brewing is interested is giving Cincinnati more than beer. They fund community projects, as well as offering Ohioans a great place to hang out over a few beers and a pizza. That is not to say, however, that they do not have a supreme commitment to brewing. Founded by three guys who describe themselves as ‘maniac’ homebrewers, this obsession with the craft give their beers unique and sometimes as the name suggests mad character. Combine this with their talents and their team of artists and you get MadTree beers, some of the most interesting and beautiful in Ohio.

One of the world’s top 100 brewers, Hoppin’ Frog make beer you are guaranteed to go mad for. A small company with big reach, Hoppin’ Frog have maintained their commitment to hands-on brewing even as their beers have spread across America and the world. They are now available in 19 states in the US and 15 countries around the world, without any of their brews losing that signature Akron spirit that made them so popular in the first place.

Located in the town of Willoughby, the Willoughby Brewing Company produces small town beers with big city flavors. These big flavors include their Peanut Butter Cup Coffee Porter, a World Beer Cup gold award winner that defies description. Currently not bottled or canned, the best place to track it down on their other fine beers is a visit to their brewpub itself, where you can enjoy their drinks alongside a menu of American classic food perfectly suited to their ales.

Pub, American, $$$
Facebook
Email
Twitter
Pinterest
Copy link
Share
Maumee Bay Brewing Co. create beers with an equal focus on the past and the future. Their beers are inspired by the history of Ohio as a beer producer whilst also keeping up with the innovation that marks the area’s brewing in the 21st century. These combine to make for over 30 stunning beers, most famous of which is their Buckeye beer.
Give us feedback