Relive an Iconic Movie at This Cleveland Museum 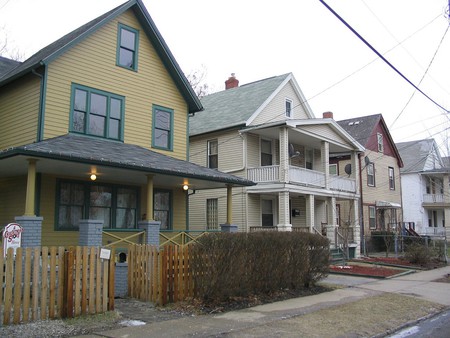 Are you a big fan of the iconic 1983 holiday hit A Christmas Story? If you’re in Cleveland, you can visit the actual home where the exterior scenes were filmed, and even stay overnight.

Ralphie Parker, the fictional little boy who charmed audiences in the nostalgic cult seasonal classic A Christmas Story, lived in Hohman, Indiana. But scenes for the film, including the exterior scenes of Ralphie’s home, were filmed in the Tremont neighborhood of Cleveland, Ohio. The iconic yellow house was chosen for its quaint charm and recognizable 19th-century architecture.

San Diego-based business owner Brian Jones bought the house in 2004 for just $150,000. Jones had already capitalized on the film’s fame, having started a leg lamp business based on the notorious stockinged leg lamp prized by Ralphie’s Old Man. (The leg lamps are sold today at the museum’s gift house.)

Jones watched the movie hundreds of times, mapping out each room in Ralphie’s home painstakingly, in order to create an uncanny replica of the movie set that would impress even the most devoted fans. A Christmas Story House and Museum opened in 2006, with over 4,000 visitors attending at the grand opening, including several of the movie’s cast members.

The Parkers’ house has been meticulously refurbished and renovated room by room to mirror the scenes in the movie’s vignettes, from each piece of furniture to the Christmas tree. The museum is packed with vintage memorabilia, either from the set itself or replicated to perfection. Fans can relive their favorite scenes in as much detail as possible, taking in movie trivia and behind-the-scenes photos of the making of the film.

Visitors to the museum can see the lamppost where an unfortunate Ralphie got his tongue stuck, Randy’s snowsuit, the oven boasting the ill-fated Christmas turkey, the Parkers’ car, Ralphie’s pink bunny suit, Miss Shields’ chalkboard, the Higbees’ toys, and the decoder ring that turned out to be nothing but an Ovaltine advertisement.

In 2015, A Christmas Story House and Museum purchased the exact Red Ryder BB gun treasured by Ralphie in the movie. Fans can now hold, pose, and take photos with the gun when they tour the museum today.

At the gift shop across the street, fans can purchase their own decoder ring just like Ralphie’s, a famous fishnet-covered leg lamp of their own, and other memorabilia.

There’s even more in store in the coming months for the Christmas Story Museum. It has purchased the house next door, which in the film belonged to the Parkers’ unruly neighbors, the Bumpuses. Remember? They allegedly owned 785 “smelly hound dogs” and stole the Christmas turkey, leaving the Parker family to eat Chinese food for their holiday meal. The Bumpuses’ home is expected to go through a similar renovation process as the original house.

The Christmas Story House and Museum is open year-round from 10 a.m. to 5 p.m. and is available for both daily visits ($11 admission) and overnight stays by individuals and groups of up to six people, starting at $495 per night.