Philip Johnson, one of the 20th century’s most influential architects, had a fractured yet uniquely colorful career. Early on he situated himself at the outspoken helm of the Modernist movement before rebelling against these new constraints to embrace Postmodernism. With the addition of a questionable flirtation with fascism and a wry enjoyment of controversy, Johnson was an architect who pushed social boundaries as much as he toyed with artistic ones. 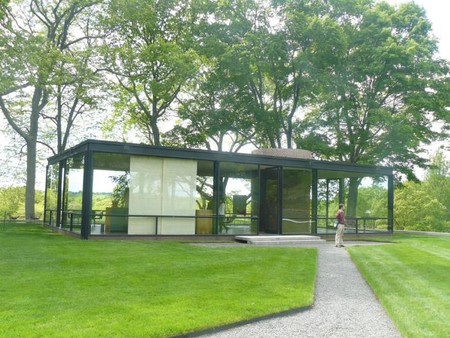 On the surface, Philip Johnson looks to be a contradictory character. It seems paradoxical that the intuitive artist who once, reflecting on how he liked to think, claimed, “what we are to do on this earth is embellish it for its greater beauty,” could also be the same provocateur who declared himself a “whore” who is “paid very well to design high rise buildings.” But by the time he died in his famous Glass House in Connecticut at the age of 98, the Modernist and Postmodernist architect had experienced a turbulent private life in which he was both enraptured by the immense power of Nazism in 1930s Berlin and devastated by a nervous breakdown brought on by having to conceal his homosexuality.

It is an unavoidable fact that Philip Johnson was endowed with a level of wealth that can fundamentally affect a person. His father, wishing to see his children prosper whilst he was still alive, bequeathed real estate to his two daughters and his modestly performing Alcoa stock to a young Philip. By his mid-20s the aluminium giant had grown exponentially and Johnson’s wealth surpassed his father’s. This capital allowed him to embark on a modern grand tour of Europe after completing an interrupted course in Greek and philosophy at Harvard.

It was during this visit to Europe that Johnson, accompanied by Henry Russell Hitchcock, encountered two of his greatest early influences in Mies van der Rohe and Le Courbusier. The proposed purpose of this first trip was to visit the great works of modern architecture across the Atlantic. While this excursion certainly proved to be a source of inspiration, Johnson’s exhibition in New York’s Museum of Modern Art in 1932 was perhaps just as influenced by the technological transformations in the engineering materials of the time. This exhibition, and Johnson’s manifesto, held that form should reflect function and rejected the used of superfluous ornamentation. His wealth, as well as his febrile mind, allowed for Johnson to develop his role as MoMA’s Director of Architecture, using the museum as a showcase for his modernist tastes as he hungrily consumed inspiration from his contemporaries.

But, just as his enthusiasm and network of artistic friends was ballooning, Philip Johnson suddenly redirected his immense energies into right wing politics, searching for a radical leader to front the Union Party that he and a friend, Alan Blackburn, had created to rescue the United States from the Great Depression. Johnson had become intoxicated by Hitler’s hypnotic rhetoric at a rally during an earlier visit to Germany, and was enamoured by the power and aesthetic of Nazism. As the Second World War approached he found himself drawn towards Berlin, but just as his name and reputation became in danger of being tarnished by his unsavoury associations, Johnson again made a seemingly inexplicable retreat back to Harvard, enrolling at the Graduate School of Design. Despite an abortive stint in the US Army, Johnson had finally settled on a career path that would engage and challenge him for the rest of his life.

One of Philip Johnson’s earliest designs would end up becoming that with which his legacy is most closely associated. The Glass House in New Canaan, Connecticut was a starkly minimalist building whose transparent walls and austere decor were typically confrontational in tone. This work, it quickly transpired, was not the mould-breaking prototype that it originally appeared to be, but a rough homage to Mies van der Rohe’s Farnworth house, a design whose construction had been temporarily delayed. Johnson never hid the fact that the Glass House was inspired by his hero, but it was left to journalists to opine that perhaps he was a more adept self-publicist than the truly radical architect he aspired to be. 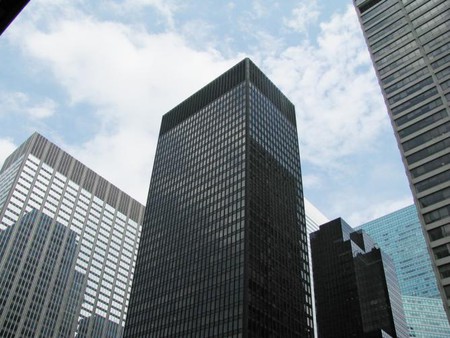 New York’s Seagram Building brought Johnson and Mies together again with the later commissioned to design the structure and exterior of the building and the former working on the lobby and Four Seasons restaurant. Around this time, however, Johnson had already begun drifting away from the international style that he had so ardently championed. 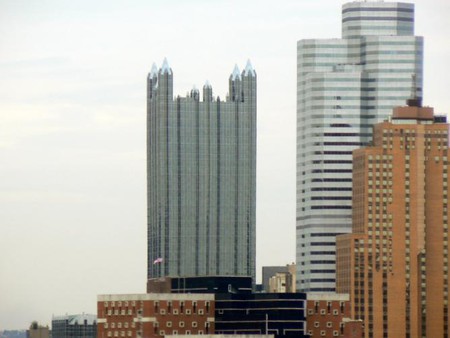 What followed was a steady portfolio of work that captured his delight in grand, almost ostentatious buildings, matched with an evolving post-modern taste and resurgent confidence in his abilities. The palatial, neo-gothic PPG Place tower in Pittsburgh and Pennzoil Place in Houston were both iconic skyscrapers whose sharpened tops seem to break out of the modernist box with a purposeful force, as though the angsty understudy from the Seagram commission was escaping from the dark interiors of the buildings. 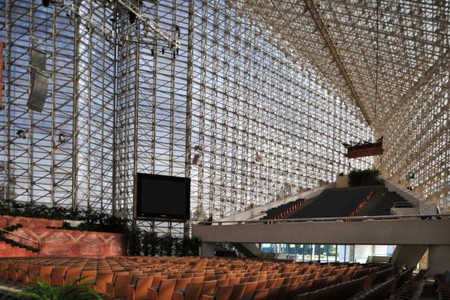 The Crystal Cathedral in Garden Grove, California afforded Johnson the opportunity to construct his long held vision of “the greatest room in the world.” With 10,000 panes of glass affixed to the skeletal structure, this transparent edifice is distinctly characteristic of Johnson’s unorthodox and kinetic approach. But perhaps the building for which Johnson would most wish to be remembered and his architectural style associated with, is the Sony Tower, formerly the AT&T building. Marking a grand and distinctive return to New York, its ornamental top and generous arched entrance way soften the granite exterior and represent a distinctly unapologetic defection of Johnson to postmodernism. In a sea of modernist glass boxes, the circular Chippendale top of the tower is reminiscent of a young, bespectacled Philip Johnston, ever the contrarian, swimming against the tide.