Inside Cleveland’s West Side Market 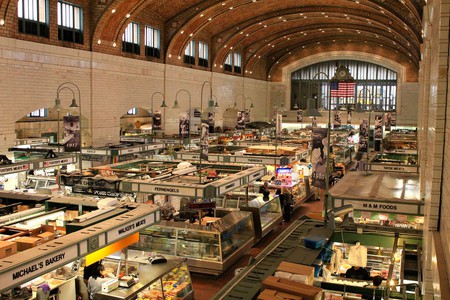 The West Side Market in Cleveland | © Daniel X. O'Neil / Flickr

The West Side Market in Cleveland, Ohio, opened in 1912, making it the oldest market still operating in the city. The massive space, smack dab in the center of the historic neighborhood of Ohio City, has a 44-foot-tall (13.4 meters) vaulted ceiling and a stunning clock tower. And on any given day, locals and tourists alike roam the many aisles, chatting with dozens of vendors to hunt for their favorite food staples, inexpensive fruits and veggies, and surprising new snacks to try.

I despise your April climate, but #cleveland you are definitely a fun town. #ohio #cityrun #westsidemarketcleveland #abitnippy

Vendors at West Side Market range from local farmers to artisans putting new, creative twists on traditional cuisine. Favorite vendors include Theresa’s Bakery, a family-owned business that’s been selling over 17 flavors of cannolis and 30 kinds of bread at the market for nearly two decades, and Pinzone’s Meats, a fresh meat stand where Ohio beef and pork have been on offer since 1976.

Piccadilly Artisan Yogurt sells liquid nitrogen ice cream crafted from local and organic ingredients, while The Cheese Shop sells over 175 rare and traditional cheeses, both domestic and international. And if you’re a big fan of mushrooms, you’ll want to check out the Avant Gardens Farm & Mushroomery, selling oyster and gourmet-cultivated mushrooms from their local “mushroomery” in nearby Youngstown, OH.

Cleveland is a haven for global cuisine, given the diversity of the city and each of its neighborhoods. This diversity is reflected in the produce, prepared foods, and specialty items sold at West Side Market. Pierogi Palace is a second-generation family-owned top seller at the market, serving up potato pancakes, noodles, several kinds of stuffed cabbage, and, of course, pierogies.

Meanwhile, Kim Se Cambodian Cuisine is an award-winning market favorite that specializes in Southwest Asian foods like Cambodian sticky rice in banana leaf wrappers and stuffed chicken wings with grass, lemon, and peanuts. Orale! Contemporary Mexican Cuisine sells traditional enchiladas and empanadas alongside vegan and gluten-free options. And if you would like a sit-down meal, the West Side Market Cafe uses ingredients from the best local vendors in their breakfast, lunch, and brunch choices.

Doing some shopping at the Westside Market this morning.. Bought #potica and #klobase, but no small Hungarians.. #🍴

Cleveland’s West Side Market is open year-round at 7 a.m. on Mondays, Wednesdays, Fridays, and Saturdays, and 10 a.m. on Sundays. It’s frequently busy, so be prepared for crowds!

A post shared by Sophia Madeline Elizabeth (@theycallmemellowyelloww) on Nov 17, 2017 at 10:34am PST