How This Home in Cincinnati, OH, Was Inspired by Mushrooms 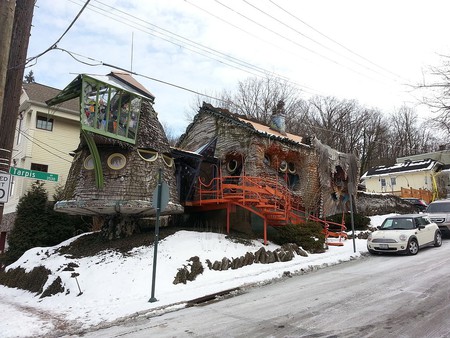 Take a ride through Cincinnati’s Hyde Park neighborhood, and you might stumble across an especially conspicuous house. The locally famous Mushroom House, designed by architect Terry Brown, is a magically wacky regional icon. Let’s take a look at its quirky history.

The Hyde Park neighborhood in Cincinnati, Ohio, was developed in the late 19th century exclusively for Cincinnati’s wealthy elites. Today, it’s a charming, quaint area with a vintage feel, home to shopping mecca Hyde Park Square and the legendary Graeter’s Ice Cream. One of Hyde Park’s most well-known claims to fame is the Mushroom House, a mushroom-inspired home nestled in the streets of an ordinary residential area.

The Mushroom House has a distinctive, can’t-miss-it look, complete with its orange steps, architecture that appears positively fungal, and a dreamy design that looks like it was lifted straight out of a Tim Burton film or the pages of Alice in Wonderland. And that combination of kookiness and fairy tale is exactly what architect Terry Brown was trying to evoke when he was inspired to construct the iconic home.

The design of the Mushroom House was a collaborative effort between Brown and 35 of his former students from the University of Cincinnati College of Design, Architecture, Art, and Planning. Over the course of 14 years, from 1992 to 2006, they built the one-bedroom, one-bathroom, 1,260-square-foot house on the corner of Tarpis and Evie Ave. Brown himself lived in it from 2006 to 2008, the year he sadly died.

My Uncle was a genius. Thankful I got to spend time with him and help tile a ceiling in one of his rooms. True inspiration for any architect and examples of letting your mind free and see what comes from it. #terrybrownarchitecture #architecture #mushroomhousecincinnati #wahopi

The Mushroom House is best known for its wrapping staircases, warped shingles, and brightly colored stained glass. Irregular, funky shapes, asymmetry, and atypical angles give the house a distinct character and personality, all of which is meant to reflect the chaos and beauty of nature. Materials used to build the house include glass, ceramic, shells, metals, and wood. Except for the glass sunroom poking out of the side of the house, the entire residence is meant to take on organic shapes and to resemble, of course, a mushroom.

The Mushroom House is a local landmark, and according to Zillow, it went up for sale a few years ago, with the website describing it as “an amazing home or the perfect office […].”