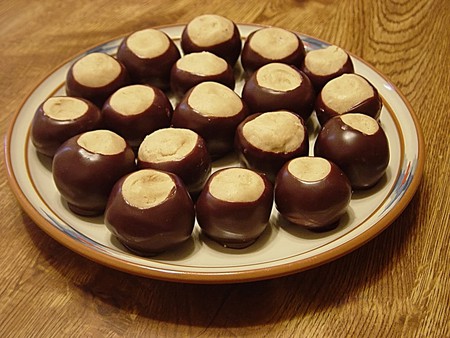 The buckeye is Ohio’s state tree, a nickname for native Ohioans, the name of Ohio State University’s mascot, and a scrumptious chocolate peanut butter candy that locals love to make during the holidays. Known as Ohio’s unofficial state candy, buckeyes are a source of Ohio pride and one of Cleveland’s most famous local treats.

The buckeye is a round, dark brown nut with a lighter beige end that comes from the buckeye tree (part of the chestnut family). It became the official state tree in the 1950s, but Ohio locals were referred to as “Buckeyes” long before that.

Colonel Ebenezer Sproat, a pioneer and Continental Army officer during the Revolutionary War who helped to found Marietta, Ohio, is rumored to have been the first to sport the nickname of “Buckeye.” The story goes that he was nicknamed “the eye of the buck” by local native Americans.

Others claim that General William Henry Harrison sparked the association of buckeyes with Ohio when he used the phrase “the Buckeye State” during his presidential election campaign in the mid-1800s. Whatever the case, the term “Buckeye” eventually became a quirky moniker for Ohioans. Eventually, Ohio State University took on the Buckeye as its mascot, and its sports fans became known as “Buckeyes,” too.

Peanut Butter Buckeyes are a holiday staple in Ohio! And for good reason, who doesn't love peanut butter and chocolate?? They're a super easy candy to whip up 😁 Recipe on the blog {link in bio}

The tradition of crafting the homemade peanut butter chocolate candies is a long-held holiday ritual in Ohio. Though many locals claim to have been the first to make buckeyes for Ohio State games and Christmas parties, most agree that the candy-making tradition picked up speed in the 1970s and 1980s.

The rich candies are made by dipping peanut butter fudge in a chocolate coating so that just a small layer of the peanut butter is visible, making it resemble the fruit of the buckeye tree. Buckeyes are also available dipped in white chocolate and dusted with hazelnuts or sprinkles.

WHY DID THEY PUT THIS CONTAINER BY ME? #buckeyecandy #christmascookies

The buckeye tradition in Cleveland has spawned dozens of creative takes on the sweet treat. Malley’s Chocolates is one of the most famous places to snag a box of the famous candies, with a bonus peanut butter cap on top of the traditional chocolate and filling. Other local chocolate and confection shops in Cleveland and throughout Ohio, such as Chocolate 76, usually have handmade buckeyes for sale. And Coco Beans Candy, in Fremont, Ohio, holds the record for the World’s Largest Buckeye, weighing in at a whopping 271 pounds.

The @malleyschoc towers on 480. These things are huge and so strikingly cute amidst the dull landscape along the open highway. #malleyschocolates #malleys #thisiscle #cleveland #216