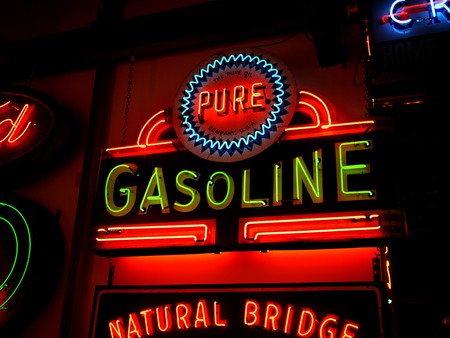 The American Sign Museum in Cincinnati, OH, is one of the nation’s quirkiest museums, featuring signs from over a century of American history. Let’s take a look at 10 of the coolest and most iconic signs on display in the museum.

Tod Swormstedt served on the staff of Signs of the Times magazine, known as the “bible of the signs industry.” In 1999, he used his years of experience and knowledge to found the American Sign Museum (originally named the National Signs of the Times Museum), which now houses hundreds of signs from across the country in over 20,000 square feet of space in Cincinnati, OH.

The American Sign Museum is a great spot for roadtrippers, vintage lovers and history buffs. Fans of nostalgia, Americana, and all things retro will also love it. If you’re intrigued by neon, you can also get the inside scoop on how neon signs are made, as employees from Neonworks stop by to show museum visitors the nitty-gritty of signmaking.

One of the landmark destinations in Cincinnati and the quintessential American museum, this is a popular stop for locals and tourists alike. Let’s take a peek at 10 of the most popular signs at the American Sign Museum. 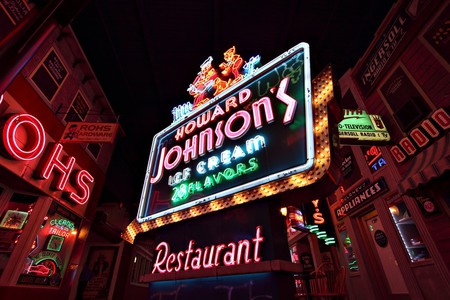 A 9-foot, three-dimensional 1960s-era fiberglass sculpture of Frisch’s Big Boy, headquartered in Cincinnati, is one of the American Sign Museum’s most-photographed pieces. Shiny and repainted, the iconic mascot has been restored to its original polished condition.

Many of the American Sign Museum’s signs are related to travel (retro gas stations, fast food, and motel advertisements, for example), given America’s wide expanse and history of pioneering and roadtripping. This porcelain neon SkyVu Motel sign, from Kansas City, KS, was built in the 1950s and weighs a whopping 600 pounds. 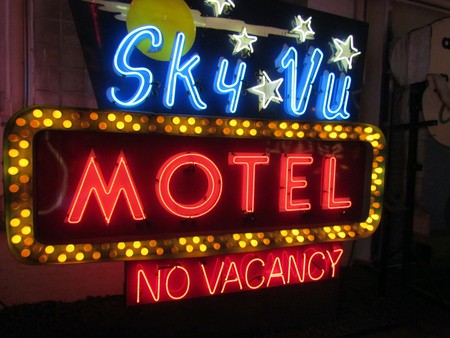 This 1950s Dutch Boy Donuts sign, from Denver, CO, has a rotating windmill and has been restored and repaired heavily since being acquired by the museum. Dutch Boy Donuts had a massive following when its treats were sampled by Denverites along the famous commercial hub of Colfax Avenue. 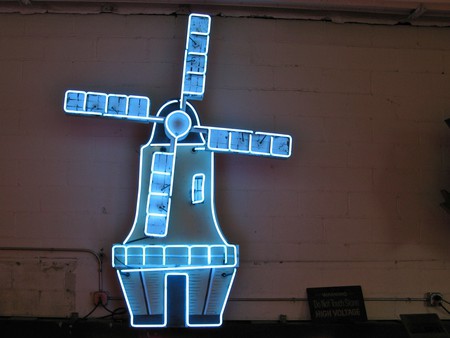 The American Sign Museum is best known for its neon signs, but also displays posters, carvings, and painted signs – all slices of nostalgic Americana. This one, a vintage advertisement for Popsicles from 1953, was painted on the side of a barn.

This massive genie statue, standing at 20 feet tall, welcomes visitors at the American Sign Museum’s entrance. Built in the 1960s, the genie was discovered at a carpet cleaning and flooring company in California.

The American Sign Museum is a great place if you’re an aficionado of relics and icons. The famous Sherwin-Williams logo, which features a can of red paint literally covering the earth with color, is one of them. The logo was created in 1905 and is still going strong, despite controversy. You can see it at the museum in this 1960s neon version.

Satellite Shopland was a shopping center in Anaheim in the 1960s, and this rotating satellite, constructed by a metalworker, was a famous local attraction in and of itself. The six-foot globe, with its 11 lit metal spikes, is the highlight of the American Sign Museum’s Plastic Sign section.

This repainted fiberglass pig, which weighs 2,000 pounds with its accompanying 16-foot trailer, is a relic from Cincinnati’s history of pork production and its nickname of “Porkopolis.” The massive pig originally stood outside a Kahn’s meat plant, the last of which closed in 2012.