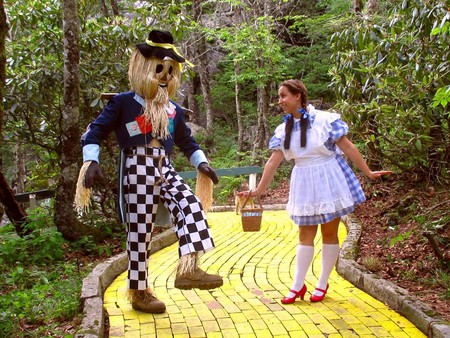 Somewhere over the rainbow in North Carolina, chipped yellow bricks lie. For six days in June, be blown away by the Land of Oz.

In the depths of the Appalachian Mountains – on Beech Mountain, North Carolina, to be exact – the famously failed theme park the Land of Oz stands empty.

Opened to the public in June 1970, this one-of-a-kind theme park forwent rides in favor of creating an emotional experience, through which visitors could inhabit Dorothy’s story and interact with its characters. Hailed as the Outstanding Tourist Attraction of 1970 by the Washington Daily News, over 400,000 people, including Muhammad Ali, Jay North and Charles Kurait, followed its yellow brick road.

Once there, guests were able to watch live theater shows, sing and dance with the munchkins and even take a balloon ride down the side of the mountain.

#TBT The original Land of Oz costumes from 1970-1975 featured Dorothy in a miniskirt, the Scarecrow, TinMan, and Lion in Mascot-like masks, and even dancing mushrooms in the Emerald City Show! #landofoz #landofoznc #beechmountain #dorothy #tinman #scarecrow #mushrooms #retro #followtheyellowbrickroad #Magicmoment

Sadly, its fame was short-lived. Months prior to the theme park’s grand opening, its passionate creative director, Grover Robbins, passed away from cancer, leaving it without a guiding light. Lacking his influence, what was originally supposed to be an imagination-powered adventure into the world of Oz became a commercial piggy bank with revenues funnelled into other properties rather than into the upkeep and maintenance of the park.

Another blow came in 1975 when a fire ravaged the Emerald City. The blaze destroyed the amphitheater and its contents, as well as damaging the nearby shops and restaurant. While the property was burning, someone, taking advantage of the commotion, slunk into the park’s museum and stole many of the film costumes including Judy Garland’s original gingham dress.

May 3rd, 1970 – MGM Liquidation Auction begins. @LandofOzNC would obtain many of the film's original costumes with the help of #DebbieReynolds, including one of Judy Garland's Dorothy Dresses. Many of these costumes were stolen in late 1975. #landofoz #landofoznc #beechmountain #Rubyslippers #yellowbrickroad #dorothy #MGM #gingham

Following the fire, new management tried to revamp the magical city on the mountain, but with little success. With each passing season, visitor numbers dropped and necessary modernizations were overlooked. By 1980, the Emerald City had to close its doors.

For a decade, the park lay in disrepair, essentially given over to nature and local vandals. Then, in the early 1990s, Emerald Mountain Realty took over management of the Oz property and invited the original cast members back for a reunion to reminisce about the park’s heyday. Their stories reawakened demand and formed the impetus behind the now-annual Autumn at Oz, where the park is reopened for one weekend a year. According to the website, sales from this event are put toward restoring the park.

This year, however, the park will open its gates for a second time. Every Friday in June, as well as on Saturday, June 30, the park will offer one-hour guided tours for whomever is fortunate enough to obtain a ticket.

Promoted as the Journey With Dorothy, this summertime tour asks you to “drop all inhibitions and to remember your childhood.” To help you get there, Dorothy will be your guide as you “skip down the yellow brick road through the magical Land of Oz to help her search for the wonderful wizard during this interactive experience.”

Even better, you can momentarily become Dorothy or one of the other Oz characters, so be sure you’re ready to join in the fun at any moment. Who knows, your chance could be gone for good with the click of some ruby-covered heels.

Tickets for June’s Journey With Dorothy are $25 per person.