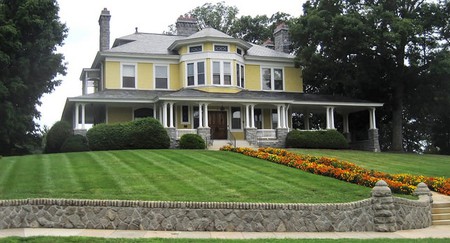 Asheville’s downtown corridor luckily avoided trappings like a proposed mall and other construction that would have destroyed the city’s Art Deco buildings and other architectural gems. This preservation of history has extended to its culture as well, which really took shape in the late 1800s with the construction of the Biltmore Estate, America’s largest private home. This project lured hundreds of craftspeople to this mountain town, establishing a culture of a strong creative economy. Here are the coolest neighborhoods in Asheville to visit or relocate to.

Downtown is the beating heart of the city, with its most popular restaurants, breweries, boutiques, and museums concentrated in just a few square miles. Some apartments and condos can be found here along with a few historic homes, but mainly this section of the city houses businesses and the bulk of hotel accommodations. High walkability, lots of music venues, and a self-guided urban walking trail also help make downtown cool along with the city’s brewery district, South Slope. 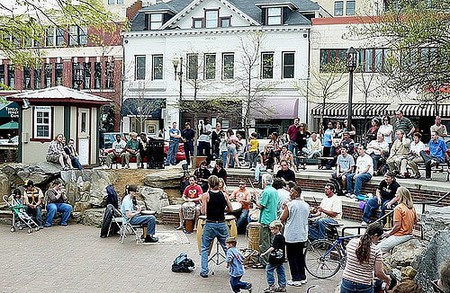 Locals love living in West Asheville, and tourists have started to frequent this quirky neighborhood more, too. Basically, this neighborhood exists on one main road, Haywood, and winds over a mile past excellent restaurants like The Admiral and dive bars such as The Odditorium and Double Crown. Behind this main street sits historic homes in a maze of skinny side streets that spill into the residential Malvern Hills community.

The River Arts District sits between downtown and West Asheville and is home to the East Coast headquarters of one of the largest craft breweries in the world, New Belgium Brewing Company. This arts and entertainment district serves as the home base for over 200 working artists, many with galleries or studios open to the public in a collection of 20+ industrial buildings. Major developments are underfoot in RAD to highlight its French Broad riverbank location, and the popular 12 Bones Smokehouse lives here, too. Historic homes make up most of the current housing inventory, but several housing complexes are in the works.

Home to some of Asheville’s most beautiful historic homes, Montford is a National Register Historic District. Several bed and breakfasts operate out of some of these majestic homes, and literary fans make a point to visit the Riverside Cemetery, where local heroes Thomas Wolfe and O. Henry are buried. Since this neighborhood was mostly built before 1920, Victorian architecture is the prominent style found here.

This neighborhood emerged as the famous Grove Park Inn was being constructed back in the early 1900s, right after the Biltmore Estate was completed. The beauty of the Grove Park Inn greatly influenced the aesthetic of this neighborhood, which led to its curving streets and oversized Tudor and Colonial homes.

As night falls on #OmniGroveParkInn #Asheville

Like Grove Park, the Biltmore Village grew up and around the Biltmore Estate to serve as a community for George Vanderbilt’s estate workers. Today, this tourist-friendly neighborhood houses several major hotel properties and a central shopping district, plus several of Asheville’s downtown breweries have opened second locations in this part of town.

It's National Beer Month! Did you know that we have 4 craft breweries in #biltmorevillage, one tap room and a great wine and beer store???? Well, you do now! 🍻 a trip to #hbv would not be complete without a visit to the Big Top at Hi-Wire – they have a beautiful tasting room, fun games, snacks from @foothillslocalmeats AND they produce and bottle right on site!! #eatavl #avlbeer #avlcraftbeer #bigtop #hiwire #foothills #nationalbeermonth

A post shared by Historic Biltmore Village (@historicbiltmorevillage) on Apr 11, 2017 at 3:43pm PDT