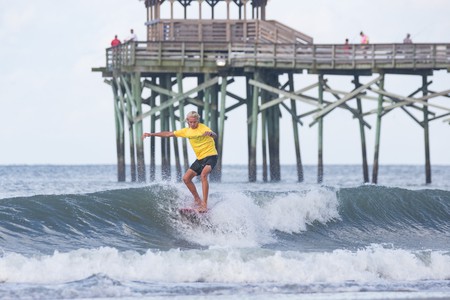 Located south of the Outer Banks, the Crystal Coast boasts 85 miles of beaches and towns. Veteran surfer and local shop owner Mike Crews provides the inside scoop on the area’s surf scene.

Despite summer being in full swing, Mike Crews and the rest of the surfers who enjoy North Carolina’s Crystal Coast are longing for fall and winter. That’s when the best waves occur along the Southern Outer Banks.

Crews, a veteran surfer and owner of Hot Wax Surf and Paddle Sports, says the area’s best surf season is August through December. The south-facing beach becomes an amalgam of cooler breezes and weather (nor’easters) coming down from Canada and tropical fronts coming up from Africa.

“When we’re surfing in the fall, the sun goes down on the right side toward the inlet and turns red, so there are all of these beautiful colors and the surfers are all silhouetted against the sky,” Crews says. “It’s picturesque. You turn to your buddy and say, ‘It just doesn’t get any better than this.’”

The Crystal Coast, an 85-mile stretch of beaches and towns, has seen an increase in popularity as visitors search for a less-crowded experience compared to the popular and famed Outer Banks to the north. According to the tourism board, the Crystal Coast welcomes 2.25 million visitors per year, including an estimated 1.3 million from Memorial Day through Labor Day. These beaches boast a shallow slope that gradually descends which makes accessing the waves, most breaking further out from shore, easier. 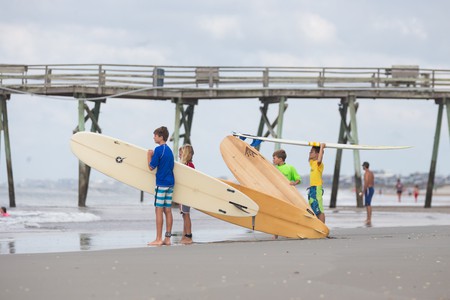 Locals and visitors prefer to surf near the many piers where the waves tend to be bigger due to friction of the nearby wooden pilings. Bogue Inlet Pier, located in Emerald Isle, is considered the area’s home break, according to Crews.

“You see all the locals out there catching waves,” he says. “Because of the way the pilings are there are some sand formations that create some waves and break. That’s definitely what we’re known for here.” 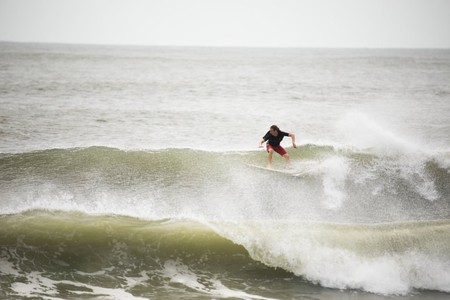 Not only do surfers frequent pier-adjacent breaks, such as Oceanana Pier in Atlantic Beach, quality swells and surf can be found at public spots at Fort Macon State Park, the Circle (Atlantic Beach), and Eastern Regional and Western Regional beach access points. Because the breaks are sand-bottom, sandbars can move frequently based on storms, so surfers are constantly on the move along the coast looking for the best waves.

“You’ve really got it all here—surfing, fishing, hunting, any kind of water sports like surfing, kiteboarding, jet ski, SUP, anything and everything,” Crews says. “You have a lot of areas to explore. Anything that’s water-sports-related you can do here and really live the life of a waterman. I can’t imagine living inland. I don’t know how someone does that.”