There’s a craft cider revolution taking place in North Carolina right now, and these 10 cideries are leading the way. You may think you know cider, but these microbreweries are taking it to the next level, with a whole new generation of flavors, techniques, and crispness. Let your nose for cider lead you from one end of the state to the other; you won’t regret the trip. 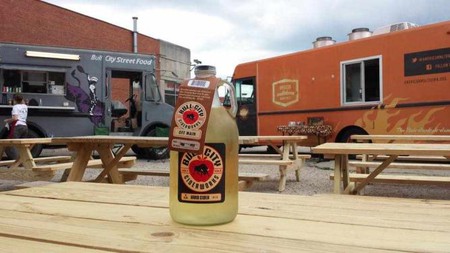 Bar, Market, Beer
Facebook
Email
Twitter
Pinterest
Copy link
Share
Map View
Taking its cue from the feistiest of the Triangle cities, Durham, Bull City Ciderworks gives you cider with attitude. They know that Durham’s foodie renaissance has left locals and visitors alike with tons and choices, so they’ve stepped in with some of the most interesting ciders you can find anywhere on the market. Stop by their cider bar right downtown to try not only a great standard cider, but also honey, sweet tea, ginger, and hoppy varieties. That’s not even counting the seasonal and small batch varieties, which range from the Sweet Mullet, which is served hot, to the Cardinal Cin, with an infusion of cinnamon. Time for some cider flights? We think yes.
Open In Google Maps
305 South Roxboro Street, Downtown, Durham, North Carolina, 27701, USA
+19192372357
Visit Website
Give us feedback

Bar, Coffee, $$$
Facebook
Email
Twitter
Pinterest
Copy link
Share
Map View
Asheville has plenty to offer, but lately Urban Orchard Cider Co. has rocketed to the top of the list of places to go in this lovely mountain city. A legitimate cider bar with the cider press located just below the bar, come here for your introduction to the world of craft cider. You can always find at least three of their deliciously crisp hard apple ciders on tap, in addition to seasonal and experimental varieties that change throughout the year. Their Sweet English is definitely one to check out, although once you’ve had that, it’s quite possible that no other cider will ever compare.
Open In Google Maps
210 Haywood Road, Asheville, North Carolina, 28806, USA
+18287745151
Visit Website
Give us feedback

A family operation from start to finish, Three Sisters Cidery uses apples from a nearby farm to produce hard cider in small batches using methods basically unchanged from cider’s inception centuries ago. The owners got their start by serving their hard cider at their wedding in 2010, and they opened up their current operation in 2013. Their top product is the Celestial, a light, dry option that’s suitable for any weather or mood, it’s a great one to try if you’re new to cider. Another point for Three Sisters is their ongoing effort to keep their business both local and sustainable.

In Asheville Noble Cider started in 2012 as the project of three friends who noticed that despite the proliferation of apples in the area, there wasn’t much of a hard cider presence. They’ve got two options for you: The Standard Bearer if you’re looking for a brilliant rendition of the classic cider, and The Village Tart if you want a new twist, this time with cherry. You can find their two main jams at bars and restaurants across Western North Carolina, and you’ll definitely want to go looking. If you come at the right time, you might get a seasonal special, like pumpkin cider.

Primarily a winery, the family-owned McRitchie Winery & Ciderworks makes both semi-sweet and dry ciders, which you can buy across the state. They make it with apples from North Carolina’s Yadkin Valley and press it on site at their own ciderworks, and the result is a light, highly effervescent version of your favorite alcoholic apple beverage. Going along with their winemaking heritage, McRitchie Cider is a fancy treat, perfect for a special occasion or a joyful celebration. In every sip, you’ll be able to imagine the work that went into it and the centuries-old legacy of hard cider.

Inspired by a taste of the real stuff in a historic village in England, Black Mountain Ciderworks endeavors to bring old and new together with their eclectic collection of ciders. They press all of their own apples to control the process from start to finish, and you’ll taste the quality in every sip. The names of their ciders hearken back to days gone by: perhaps you’d like the Saxon, which is a liquid ode to the ciders of the Sachsenhausen district of Germany, or the Good Queen Bess, which blends cider and lavender mead in honor of Queen Elizabeth I (who enjoyed the delicate taste of lavender). You really can’t go wrong with whatever you pick.

Produced by a family with eight generations of North Carolina heritage backing them up, L.L. Draughon’s Fishing Creek Cider is the premier cider product in the eastern part of the state. Their operation is tiny, but it includes their own orchard and winery, and the small size allows them to be serious perfectionists when it comes to their hard cider. They only produce about 4,000 bottles a year, which you can buy in cities around the central and eastern part of the state. If you feel like having a more personal experience, the owner himself shows up at the farmers market in Rocky Mount in the spring, summer, and fall.

Coming out of Flat Rock, North Carolina, only miles away from the state’s southern border, Naked Apple Hard Cider has been able to disseminate their products across both Carolinas. Once you try one of their two flavors, it’ll be clear why; they’re deliciously crisp and perfect for both sultry summer nights and windy fall afternoons. For the traditionalists among you, they’ve got the Wicked Peel, if you want, take their recommendation and mix it with equal parts of lager to produce a Snake Bite. Their other option is the Blackberry Gold Hard Cider, which weaves a blackberry flavor into the cider background.

Red Clay’s connection to North Carolina comes through even in the name, which they took from the ground beneath the state’s collective feet. While of course they’ve got something for the lovers of basic cidery goodness, they also have some with more particular tastes: like Hoppin’ Good Time, which is dry-hopped and contains thyme, or the Bootleggin’ Bourbon Barrel, which is aged in bourbon barrels to give it a smooth, smoky taste.

One of the vineyards with the highest elevation in the state, Saint Paul Mountain Vineyards and its dedicated owners set out in 2012 to prove that North Carolina soil could produce world-class wine, an aim which they have certainly fulfilled. However, their repertoire also includes Wallace, a sparkling hard cider that will leave you refreshed and ready to take on whatever lies before you, from a hike in the surrounding mountains to a family barbeque. They get their apples from a nearby orchard and combine a number of different varieties to produce a multi-layered and complex cider. Stop by their tasting room anytime during the year to see for yourself.