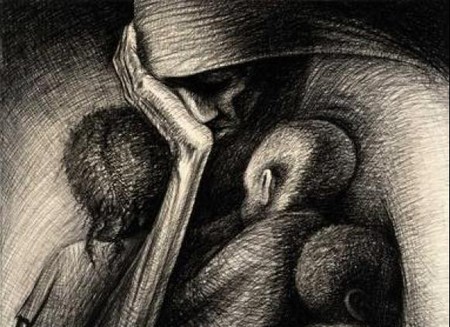 John Thomas Biggers’ artworks are deeply rooted in his experience as an African-American man working primarily in the American South at a time when the Jim Crow laws and racial segregation reigned supreme. His works lend a creative voice to those struggling under oppression and pushed to the margins of society. 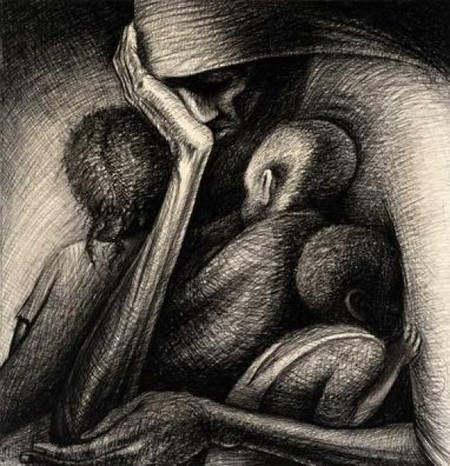 John Thomas Biggers drew from personal experience, African-American history, and observations of their shifting place within broader American society. Using the language of art and symbols, he conveys a sense of the anguish and heroic struggle; that of the oppressed.

Biggers’ art and life spanned great changes within African-American communities and well as radical shifts in the place and status of African-Americans in America. The Harlem Renaissance of the 1920s and 1930s was a time during which African-American writers, artists, and musicians such as Langston Hughes, Romare Bearden, and Louis Armstrong helped to define African-American identity amidst a climate of quotidian racial segregation. Born in North Carolina in 1924, Biggers moved to Houston, Texas in 1949 to establish the first art department at Texas Southern University that was formed as a “separate but equal” educational institution for African Americans. It was here that he created the monumental murals that hang in public buildings across Houston.

Later, his works would also incorporate the influences of African mythology and storytelling drawn from his travels through Africa. The Web Of Life mural, for example, was conceived of after Biggers’ first trip to Africa, and shows the “interdependence of living organisms in the balance of nature, and the relationship of all organisms to one another.” Its intertwining circular movement creates a sense of both protective enclosure and entrapment.

While Biggers evolved stylistically over his long career, his works remain deeply rooted in the present. The Salt Marsh, for example, hangs in the University of Houston’s Student Life Centre and takes as its subject the salt marsh near the university grounds, which Biggers identified as a place where urban life and nature converge. Through the mural, and through his keen awareness of audience, Biggers seeks to draw attention to the problem of industrial pollution within the students’ own environment.

The great 20th century shifts in the American South from racial segregation via the Jim Crow laws through legally-enforced equality under the Civil Rights Act of 1964 can be seen in Biggers’ works, which monumentalize traditionally marginalized figures.