How to Spend 24 Hours in Asheville, North Carolina 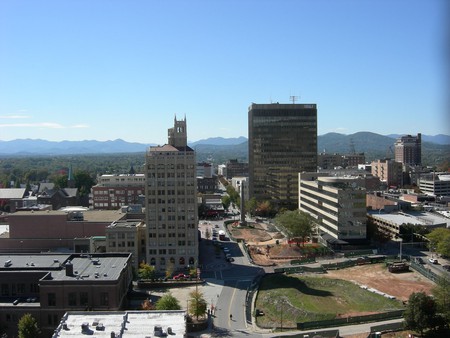 The charming mountain town of Asheville attracts over 10 million visitors each year and has earned top accolades as a meeting, travel, and wedding destination. With a rich history of celebrating the arts, the city has a youthful vibe while simultaneously honoring its deep roots that have influenced its love of all the elements that make it a cultural hub. Here’s how to best spend 24 hours in Asheville.

Breakfast with a side of history

Downtown Asheville has many epic places to grab breakfast, whether you’re in the mood for funky doughnuts from Vortex or Southern-inspired entrées with vegetarian options at Over Easy Cafe or Early Girl Eatery. After fueling up, head to Pack Square to start the Urban Trail self-guided walking tour. This trail snakes through 1.7 miles (2.7 kilometers) of downtown’s most popular streets, complete with plaques and bronzed statues along the way that help tell the city’s cultural, architectural, and literary histories. Plus, you’ll pass many cool shops, galleries, and restaurants, so pop into any place that catches your eye.

After exploring downtown thoroughly, head to Asheville’s wackiest neighborhood, the River Arts District. More than 200 artists work in a collection of nearly two dozen industrial warehouses, many that have old logos on their brick exteriors or have been covered in graffiti murals. You can watch glassblowers in action, find out about the ancient practice of chair caning, or buy handmade jewelry or ceramics for a unique souvenir. While in RAD, be sure to hit 12 Bones Smokehouse. Plan to go early as this place has been known to sell out, and the line can get pretty long during peak hours.

The sun is out and so am I. Enjoying the neighborhood. #riverartsdistrict #828isgreat

Lastly, craft beer fans should explore the city’s brewery district, South Slope. A handful of breweries (and counting) have opened locations in this once-industrial section of town, and all offer sampler flights. Plus, the breweries are staffed with knowledgeable folks who love to represent Beer City well, so don’t hesitate to ask for free tasters or for suds that don’t even taste like beer—they’re happy to accommodate beer novices and experts alike. A few spots serve their own food, but several, including Green Man Brewery and Twin Leaf Brewery, host food trucks many nights. Burial Beer Co., on the other hand, has a permanent food trailer on-site daily.

Two of Asheville’s best breakfast spots—Biscuit Head and Sunny Point Café—reside in the funky, colorful West Asheville neighborhood. The latter has an enormous menu and portions, while Biscuit Head specializes in giant biscuit sandwiches and gravy flights. On your way out of town, stop by the Brew Pump to fill up on gas and grab beers to go at this gas station’s built-in bar and bottle shop.

We are open today for all your brunch needs! Swing by #westasheville for this bacon biscuit with beet purée, kale salad tossed in red wine vinaigrette, fresh tomato, hollandaise and a poached eggy 😋🍳😻 #brunch #biscuits