How to Explore Asheville's South Slope Brewery District in 24 Hours 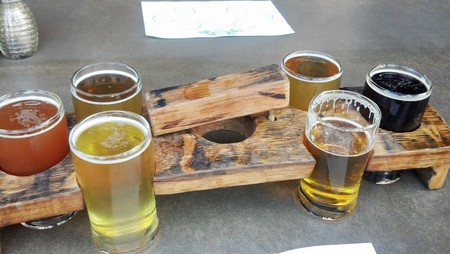 Tackling Asheville’s growing beer scene can be a daunting task, so we’re zeroing in on the South Slope, Asheville’s unofficial brewery district that is home to eight breweries located within one walkable mile. A few recommended stops have been built in to break up your beer tasting spree and show you the other sides to Asheville (art! music! food!). The best way to not overindulge is to nosh throughout the day – made easy in the South Slope since several of these breweries have on-site dining or regularly feature food trucks.

For budget travelers, consider the Gray Rock Inn or Downtown Inn & Suites, located just steps away from the South Slope. Looking for something a bit more upscale? Modern Aloft hotel is only a few blocks from this brewery district.

Start your day in the beating heart of the South Slope at Vortex with an Americano and a rotating, beer-glazed doughnut in collaboration with a local brewery. Next, head up Coxe Avenue to Asheville Brewing for your first beer of the day. Try arguably the best pizza in town if you’re still hungry, and be sure to order a pint or ask for a sample of their Fire Escape IPA. Brewed with jalapenos, it’s sure to get your motor revving. Pro tip: you can ask to dunk hops in any beer, and they’ll hand you a tea strainer filled with fresh hops.

At noon, hit Ben’s Tune-up. This deconstructed former mechanic’s shop lost its roof but gained a cool beer garden vibe. They started out brewing only sake – one of the few sake breweries in the USA – and added beer to their lineup in 2016. They also have knockout dumplings and udon, plus a dessert pot sticker of the day and coconut cold brew float. Next door, you’ll find Hi-Wire Brewing’s original location that now serves as their sour house, making it one of the few breweries in the country to have a specialty program that revolves around both craft lagers and sour beers. On tap at this and their large Biltmore Village “Big Top” location, you can find both their flagship and speciality beers.

By this point, you’ve had at least three beers (or several samples), so it’s time for a break. Feed your head at Zapow Gallery, a 3,100 sq. ft. space that highlights illustration and pop culture art, such as comic book art (hence the name!). After, stop by the French Broad Chocolates Factory, whose popularity has exploded since opening this factory in 2012. Visitors can take tours on the half-hour between 2pm and 5pm. When existing, be sure to take a peek in the windows across the street at Asheville Hardware, makers of beautiful wood slab tables and more.

Time for more beer! Don’t miss Burial Beer Co.’s envelope-pushing brews. Even if you’re not typically a beer flight person, order one here because they always have a diverse lineup and new pilot kegs tapped every week. Order your brew at the front bar, then mosey to the back patio where you can order from their permanent food truck, Salt & Smoke. Now you have a tough choice: hit up Dirty Jack’s, the decades-old dive bar (and locals’ preference), or the new Greenmansion, a three-story monster with an awesome open-air patio and bar with mountain views on clear days. Belly up to the bar at either location (or both!) because both offer some of the most comfortable bar stools around, which is important because you’ll want to sample as many as possible here as it’s one of the most popular breweries in town, and for good reason.

Buxton Hall BBQ’s owners are two of the most respected restaurateurs in Asheville, so expectations were high when they announced this establishment. They’ve lived up to the hype by nabbing a top ten spot on Bon Appetit’s list of best new restaurants in America in 2016 and serving up consistently tasty whole hog, Eastern-style barbecue (read: vinegar-pepper based sauce). After you’ve gotten a nice food base, check out The Funkatorium, but beer newbies, beware: the beer menu at the Funkatorium is, well, funky. Sours and wild brews ferment in wine and liquor barrels all around you and are the only beers you’ll find on their tap list, so ask for recommendations or try a flight.

Next up, walk to Catawba Brewing, which has four locations in North Carolina. Their Asheville location is a popular wedding venue thanks to dramatically high ceilings, exposed brick, and barrel-aging program on display. Food trucks and a back patio with cornhole pair perfectly with their small batch, only-on-draft-here taps mingled with their flagship brews. Take another beer-drinking break and stroll the aisles of Tasty Beverage. This beer store doubles as a bar with several taps and growler filling station. They have a huge selection of local beers as well as beers from all over the world, so grab some to take home.

Want to hit one more brewery before calling it a night? Twin Leaf makes for a perfect last stop because they have tons of games including giant Jenga, ping pong, and shuffleboard to give you a break from bar stools. Also note, many of the breweries also have tours running most days with no reservation needed, so be sure to take advantage and ask your beertender when the next tour is.

Experimenting with a new truffle pairing line up exclusively for @leapfrogtours! @chocolatefetishasheville the Blossom pairs perfectly with the Pep in your Step!