13 Reasons Why You Should Visit Charlotte, North Carolina 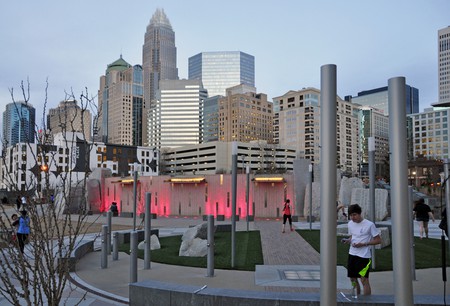 The Queen City lives up to its tagline, “Charlotte’s Got a Lot” thanks in part to its mix of urban amenities and emphasis on weaving in plenty of outdoor beauty among its skyscrapers. With distinct and diverse neighborhoods, excellent shopping, and award-winning food and beer, Charlotte can satisfy a wide range of vacation goals. Here are 13 reasons you should visit Charlotte this year.

Charlotte serves as a leader in urban forestry goals, with the city on track to increase its tree canopy by 50% by 2050. This commitment to the environment extends to the city’s greenway initiatives, several of which make for a fun bike or hike crawl between breweries and bars.

Even people who’ve never seen a NASCAR race can appreciate a need for speed and NASCAR’s roots are deep in Charlotte, with the NASCAR Hall of Fame and historic Charlotte Motor Speedway adding a buzz to the already bustling city. A majority of NASCAR race teams have also made the city their home, especially around Lake Norman, so the sport’s impact here has seeped into the community in many ways.

A post shared by Charlotte Motor Speedway (@charlottemotorspeedway) on Feb 3, 2018 at 11:00am PST

North of Davidson, or NoDa, serves as the city’s most artistic section of the city, so make time to hop between galleries, boutiques, and performance venues to see the colorful side of the city. While you’re here, stop at Amelie’s French Bakery to try some of the treats that made their way into The Hunger Games franchise, which filmed scenes in and around Charlotte.

Monday morning doughnuts anyone? Stop into @reigningdoughnuts in the #NODA neighborhood in #Charlotte for rotating flavors of doughnuts and coffee to-go ☕️✌️🍩

Also while exploring NoDa, you’ll encounter several craft breweries as the neighborhood has the second-most concentration of the city’s breweries. Its counterpart is South End, another walkable section of the city, both being two of the coolest neighborhoods in town.

‼️ Parental Advisory: Delicious Content Ahead ‼️ Today’s brand new NoDable release is a juicy IPA, sitting at 6%, that we looked to B.I.G. for a little inspiration on.

Charlotte’s choice of niche museums includes Carolina Aviation Museum, which celebrates North Carolina’s point of pride as the location of the first flight, and the Levine Museum of the New South, dedicated to the New South that emerged after the civil war. Kids will love the Discovery Place, a collection of three museums in one (Science, Nature, and Kids), but adults won’t want to miss their Science on the Rocks events, evening installments that include cocktails and special presentations and guests.

Atoms are the building blocks of matter. Do you have what it takes to build an atom? Come to the Nuclear Energy Takeover at Discovery Place Science this Thursday!

As the 16th largest city in the U.S., nearly one million people call Charlotte home. And although it sprawls over 300 square miles, Charlotte’s distinct neighborhoods have grown out and around the city’s downtown center, first as streetcar neighborhoods that have evolved into walkable hubs with thriving independent business scenes.

In a city as big of Charlotte, practically every type of cuisine can be found, and the vegetarian offerings span authentic Asian dishes to a cold-juice powerhouse, Clean Juice, that got its start in Charlotte and has now grown to over 90 locations.

Charlotte’s water playground has 520 miles of shoreline and nearly a dozen marinas and pet-friendly restaurants. Rent boats or jet skis, or cruise along the 50+ surface miles aboard a SUP paddleboard, kayak, or canoe.

The 7th Street Public Market has been called a foodie innovator hub, providing a launch pad for businesses such as It’s Poppin, a gourmet kettle corn company. Plan to spend a few hours browsing, drinking, and dining from 40+ vendors in the heart of Uptown in this coffeehouse atmosphere.

In addition to plenty of green space throughout the city and nearby Lake Norman, Charlotte has several other ways to enjoy nature. For adventurous souls, head to the U.S. National Whitewater Center to experience their Class II, III, and IV level rapids, or stay on land and bike or geocache through the 14+ acres. You can also take to the air with their zip-line or aerial obstacle courses.

Two options for guaranteed fun and adventure sit just outside the city: Carowinds and Carolina Raptor Center. Carowinds has 13 roller coasters and a handful of water rides as well as a separate water park, Carolina Harbor. Or head to the Carolina Raptor Center, a nonprofit that focuses on rehabilitating injured raptors and the conservation of other birds of prey including hawks, vultures, falcons, and owls. Add in time to explore the rest of the Latta Plantation Nature Preserve, where the center sits on 57 of the 1500 acres.

Have you watched today's Keeper Talk? Head over to our FaceBook page to learn more about Spectacled Owls!

Charlotte has lots of shopping malls and even an overhead mall connected by a skywalk, making it a great shopping destination year-round. Rather go antiquing? Head to the Waxhaw Historic District. Tons of farmers markets and two upscale destinations – Southpark Mall and Ballantyne Village – make this city a shopping haven for people of all budgets and interests.

SouthPark will be opening at 11:00am today, January 18th.