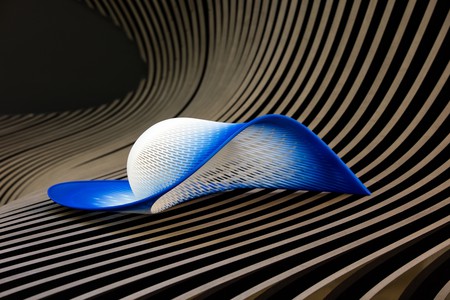 Now, ZHA created the H-Line Hat for Friends of the High Line—the community group that fought to preserve the once-abandoned rail line and transform it into a sustainable public park—to help celebrate their first-ever Hat Party. The summer soireé on June 14 will help raise money to support the 450 public programs and activities organized by Friends of the High Line, who also oversee maintenance and operations for the park. 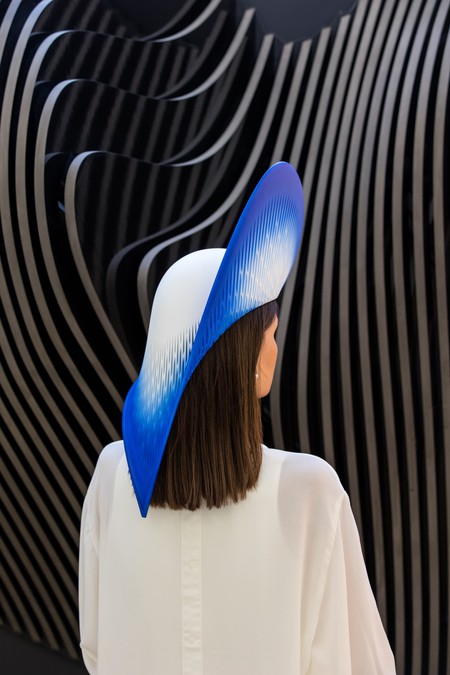 Led by senior designer Patrik Schumacher (who coined the term “parametricism” to describe Hadid’s non-linear, avant-garde style), the new H-Line Hat features white and bold blue gradients and intricately designed cut-outs. The right side swoops upward in an elegant curve, while the back portion comes down over the neck in a dramatic V-shape.

The sculptural shape of the hat was inspired by Zaha Hadid Architects’ futuristic residential building at 520 West 28th Street, which neighbors the High Line Park. The building, which was Zaha Hadid’s first and only project in New York City, features a facade of rounded steel and glass, with interlocking chevrons. According to ZHA’s, the “fluid chevrons of 520 West 28th’s facade weave up the building, conveying its split levels and demarcating each residence within. The H-Line Hat echoes these chevrons, weaving around the wearer with open and closed forms.” 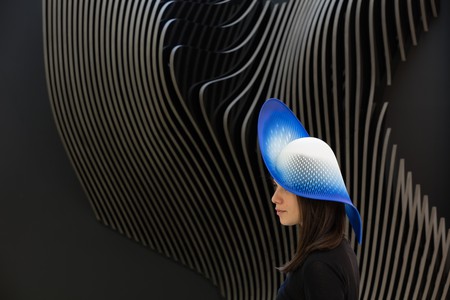 Local milliners will be auctioning off their custom designs to help raise money for Friends of the High Line, including KOKIN (Blooming on the High Line), Gigi Burris Millinery (Park After Dark Hat), and Christine A. Moore Millinery (City Skyline Hat) for the event on June 14.