Your Guide to New York's Theater District in the Movies

Walk around Times Square and the rest of Manhattan’s fabled Theater District, and the chances are you’ll be flooded with memories from the movies shot there.

“The theatuh, the theatuh,” Gary Merrill’s Bill Simpson says mockingly in All About Eve (1950). “What book of rules says the theater exists only within some ugly buildings crowded into one square mile of New York City?”

And every guide book every tourist ever clutched while wandering the west side of midtown. It’s true there’s great drama everywhere, but for more than a century, its American heart has been New York’s theater district, running from roughly 40th Street to 57th Street, and from Sixth Avenue to just past Eighth.

And since they first started making films about the theater—and the neighborhood’s very theatrical denizens—that square mile of ugly buildings has attracted filmmakers.

To start your tour of the area’s movie locations, begin with Times Square, now largely reserved for pedestrians. Formed by the intersection of Seventh Avenue and diagonal Broadway, it’s a triangle running from 42nd Street to 47th.

Classic movie characters who prowled this once dangerous destination wouldn’t recognize it. The sleaziness of the square has been scrubbed away, with the only flesh left on display belonging to the desnudas—topless women in body paint posing with tourists for tips.

Another couple who’ll come to mind are Burt Lancaster’s ruthless gossip columnist J.J. Hunsecker and Tony Curtis’s press agent Sidney Falco in Sweet Smell of Success (1957). Journalists no longer troll nightclubs looking for “items,” but when they did, Times Square was their hunting ground and J.J. surveilled it from his penthouse in the Brill Building, at 1619 Broadway. 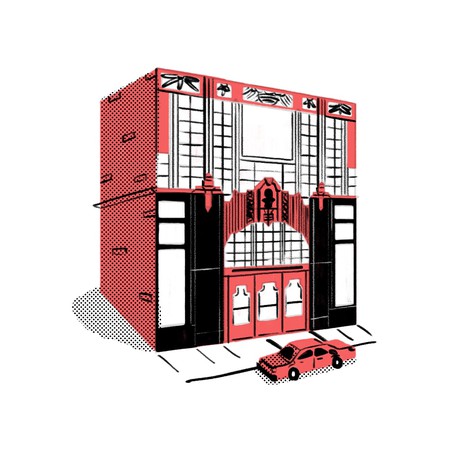 Actually, there aren’t any luxury apartments in the Brill, the once-legendary home of hungry songwriters and desperate agents. Woody Allen’s Danny Rose in Broadway Danny Rose (1984) had some appointments here (though he probably did most of his work at the late, lamented Carnegie Deli at 7th and 55th Street).

Cross the street and head downtown to 1552 Broadway. Now an Express store, it was once I. Miller, the shoe shop for “show folks.” It honored America’s favorite actresses (circa 1927) with four statues by the sculptor Alexander Stirling Calder (father of the more famous Alexander “Sandy” Calder). Look up to the third floor on the 46th Street side and you’ll see Ethel Barrymore, Mary Pickford, Marilyn Miller, and Rosa Ponselle looking back.

Two blocks down, at 1500 Broadway, is where the Clairidge Hotel used to stand, and where Jon Voight’s oddly innocent hustler Joe Buck stayed in Midnight Cowboy (1969). Joe didn’t linger—there was a small problem with the bill—and neither did the building; razed in 1972, it’s now where ABC shoots “Good Morning, America”.

Now that we’ve done Times Square itself, maybe it’s time for food. If you’re flush, there’s the Algonquin, at 59 West 44th Street. This is where Dorothy Parker cracked wise in real life, and Mickey Rourke and Kim Basinger’s lovers paused in the midst of their 9½ Weeks in 1986. Or try Sardi’s at 244 West 44th where Kermit held court in The Muppets Take Manhattan (1984) and the mad strangler (Rod Steiger) of No Way to Treat a Lady (1968) fastidiously dined alone. 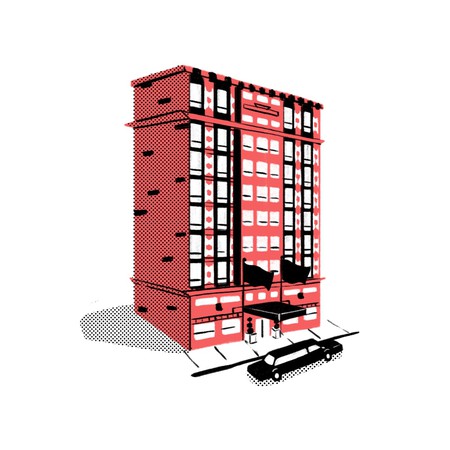 Sadly, the Sardi’s bar no longer dispenses free WisPride and Ritz crackers, but if you’re on a budget, there are food kiosks at either end of Times Square.

Ellen’s Stardust Diner at 1650 Broadway traps tourists who may have once hoped to visit the terrifically tacky tiki bar Hawaii Kai, which pushed puupuu platters at 1638 Broadway. Dressed up as “the Bamboo Lounge,” it’s where Henry Hill (Ray Liotta) and Tommy DeVito (Joe Pesci) hung out in Goodfellas (1990).

Feel like a drink instead? Wander over to Jimmy’s Corner, at 140 West 44th Street. The neighborhood’s last great dive, it’s run by retired boxer Jimmy Lee Glenn. Slap down a five dollar bill (you’ll get change), observe the posted signs (“Let’s Not Discuss Politics Here”), and look to the back room, once the scene of Robert DeNiro’s comic stylings as Jake LaMotta in Raging Bull (1980). 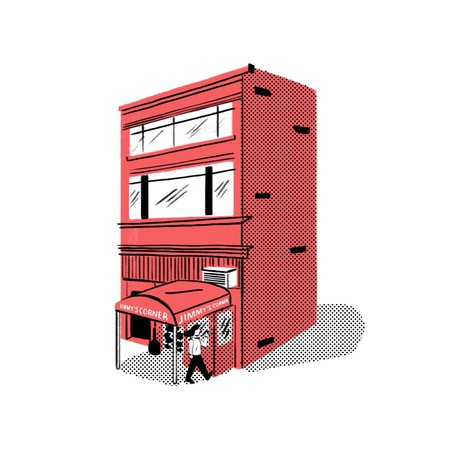 While we’re in the theater district, how about some theater? Or, at least, Hollywood’s version of it.

Start at the St. James Theatre, at 246 West 44th Street, where Riggan Thomson (Michael Keaton) mounted his disastrous What We Talk About When We Talk About Love in Birdman (2014). For memories of another theatrical failure, walk up two blocks to The Music Box, at 239 West 45th Street, where Murder Most Fair, written by famous playwright Sidney Bruhl (Michael Caine), met a foul reception in Deathtrap (1982).

A bigger hit was at the John Golden Theatre at 252 45th Street, where All About Eve‘s Margo Channing (Bette Davis) had a long run in Aged in Wood. Now stroll up two blocks to the Palace, just off 47th Street at 1564 Broadway; Joe Gideon (Roy Scheider) had plans for a great new musical there in All That Jazz (1979), but he didn’t live to see it. (Hell, he didn’t live long enough to name it.)

A block away at 137 West 48th Street, you’ll find The Playhouse—or at least, you might have found it if Max Bialystock (Zero Mostel) and Leo Bloom (Gene Wilder) hadn’t blown it up after the opening of their hit show Springtime for Hitler in The Producers (1967). In reality, the theater was replaced by an office building shortly after The Producers was filmed.

For an after-theater drink, head uptown past the Paramount Plaza building at 1633 Broadway, where Rupert Pupkin (Robert De Niro) tried to get in to see Jerry Langford (Jerry Lewis) in The King of Comedy (1982). Then go east to the 21 Club at 21 West 52nd Street, home to high-end imbibers from All About Eve, Sweet Smell of Success, Wall Street (1987), and Manhattan Murder Mystery (1993).

And if you run into that pompous Bill Simpson? Tell him we like this square mile of the theatuh just fine. 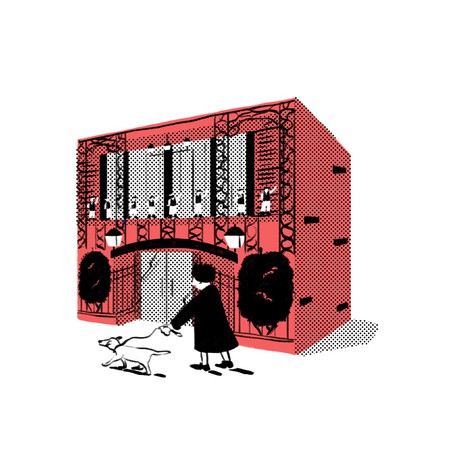