Your Guide to New York's Little Italy in the Movies 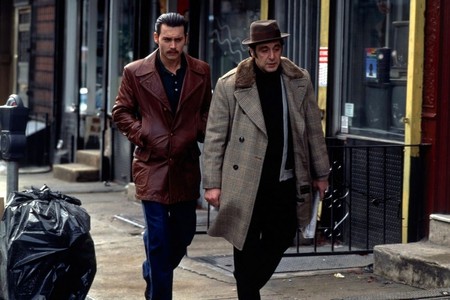 Originating in a former slum area called Mulberry Bend, Little Italy in lower Manhattan has served the cinema well—mostly as an inspiration for organized crime movies.

With its narrow streets, small shops, and walled cathedral, Little Italy has unsurprisingly been compared to a medieval village. The neighborhood has managed to retain that feeling even as its boundaries have shifted and souvenir vendors and upscale boutiques have replaced some of its authentic Italian flavor. This storied Manhattan enclave, which has been home to countless immigrants, remains vital—in life, and also in numerous movies.

No filmmaker has brought the neighborhood more vividly to the screen than Martin Scorsese. Born in Queens, Scorsese grew up in Little Italy, where his parents were also raised. He attended the former St. Patrick’s Old Cathedral School on Prince Street and was an altar boy at St. Patrick’s Old Cathedral at the corner of Mott and Prince Streets, which is now a basilica. These experiences have colored his work, as have the rest of the Italian-American world he knew during his childhood. 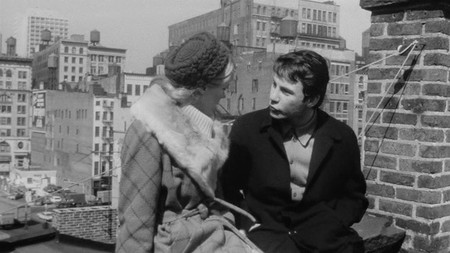 The neighborhood is a powerful presence in Scorsese’s early feature Who’s That Knocking at My Door (1967). Local kid J.R. (Harvey Keitel), who kills time with his friends at a Little Italy social club, meets a beautiful girl (Zina Bethune) while waiting for the Staten Island Ferry, and he charms her with his love for movies.

They begin a romance, but it falls apart after she confides that another man raped her. In a fleeting idyll, she and J.R. talk and kiss on a rooftop, alone with the water towers and pigeons. At the film’s conclusion, the cathedral’s altar provides a backdrop for J.R.’s confused emotions.

Down these ‘Mean Streets’

Scorsese’s even more explosively personal Mean Streets (1973) unfolds over a few days during the Feast of San Gennaro. Keitel plays the guilt-ridden protagonist, Charlie, but some of his thoughts are heard in Scorsese’s voice. Exterior locations include streets and alleyways in the neighborhood and a gun shop on Grand Street.

Though some Mean Streets interiors were shot in Los Angeles, Scorsese made a point of filming in Manhattan’s tenement stairwells, with their crumbling walls and tiled floors. In an evocative nighttime scene, Charlie and his unstable friend Johnny Boy (Robert De Niro) break into the old cathedral’s graveyard, where Johnny Boy lies down on a tombstone. 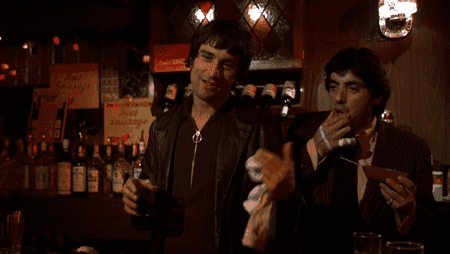 A delight for fans of his work and Little Italy enthusiasts alike, Scorsese’s documentary Italianamerican (1974), in which he interviews his parents, Charles and Catherine, was filmed in their apartment on Elizabeth Street. Catherine—who also acted in many of her son’s films—demonstrates how to cook her tomato sauce, and both parents reminisce about their family history and cultural traditions, as well as the area’s vibrant mix of ethnicities.

Scorsese delved deeper into the past—to a time of 19th-century tribal turmoil that included resentment against Irish immigrants—in Gangs of New York (2002), inspired by Herbert Asbury’s 1927 book The Gangs of New York: An Informal History of the Underworld.

The brick wall around the old cathedral was built because of violence like that depicted in Scorsese’s phantasmagorically brutal epic. Inside the narthex, an inscription marks how the cathedral withstood attacks from Nativists and Know-Nothings.

St. Patrick’s Old Cathedral’s interior also appears at the climax of Francis Ford Coppola’s The Godfather (1972), when Michael Corleone (Al Pacino) attends the baptism of his godchild, a scene intercut with shots showing his enemies being slaughtered. In The Godfather Part III (1990), the cathedral provides the setting for a ceremony in which he is honored; the streets of Little Italy appear as well. 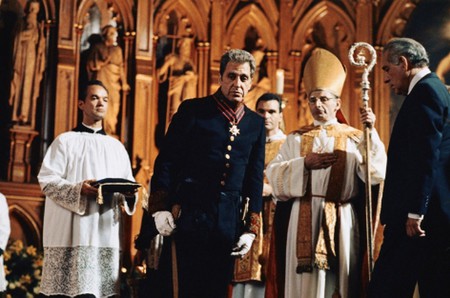 You can visit a Mulberry Street location that was used in Donnie Brasco (1997), directed by Mike Newell and based on the real-life saga of an FBI agent who infiltrated the Mob during the 1970s. The key scene in which the undercover agent (Johnny Depp) meets mobster Benjamin “Lefty” Ruggiero (Al Pacino) is set at Mare Chiaro at 176 Mulberry. Now called the Mulberry Street Bar, it still has pressed tin on its walls and ceilings.

Of crime and the family

The need to navigate between family and criminal ties that is a theme in films like Donnie Brasco also surfaces in noirs where Little Italy offers inspiration for hardboiled stories. In Robert Siodmak’s Cry of the City (1948), Police Lieutenant Candella (Victor Mature) grew up in the same Italian neighborhood as Marty Rome (Richard Conte), and is fond of Rome’s mother, but the two men have taken different paths. 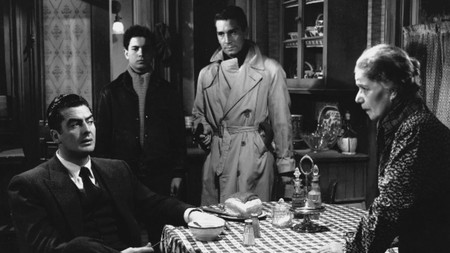 Conte also stars in Phil Karlson’s The Brothers Rico (1957), based on a story by Georges Simenon. He plays a former mob accountant, Eddie Rico, who’s beginning a hopeful new life but is drawn back into an entanglement with the syndicate when his brothers are in danger.

Much of the action unfolds in Florida, Arizona, and California, but Eddie returns twice to Manhattan, where his mother runs a Mulberry Street store and where the family’s relationship with the crime boss apparently began.

Though Abel Ferrara was born in the Bronx, he has lived in Little Italy, and he has used it as a setting in movies, including China Girl (1987), a Romeo and Juliet story about lovers from Little Italy and Chinatown.

In his gritty 2010 documentary Mulberry St., filmed during the Feast of San Gennaro, Ferrara chats with friends tied to the neighborhood or the festival, including restaurateurs and actors, while dropping in on Italian eateries and the Church of the Most Precious Blood, where the procession begins.

Ferrara and actress Shanyn Leigh, his then-girlfriend, must vacate an apartment before marshals come: the film is similarly frenetic in its quest to capture a changing scene. 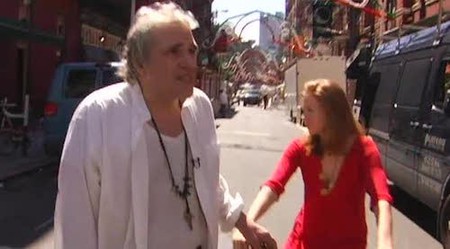 Adapted from a novel by Francine Prose, Nancy Savoca’s Household Saints (1993) offers a magical-realist view of Little Italy through the lens of family lore. A Mulberry Street butcher, Joseph Santangelo (Vincent D’Onofrio), marries Catherine Falconetti (Tracey Ullman) after he wins her in a pinochle game.

You won’t find the Santangelos’ store, but Albanese Meats & Poultry on Elizabeth Street is a similarly authentic Italian meat shop. The Santangelo matriarch (Judith Malina) boasts of once being so poor that she would scavenge in the garbage at Umberto’s Clam House (now located at 132 Mulberry Street) and make a delicious soup from clamshells. 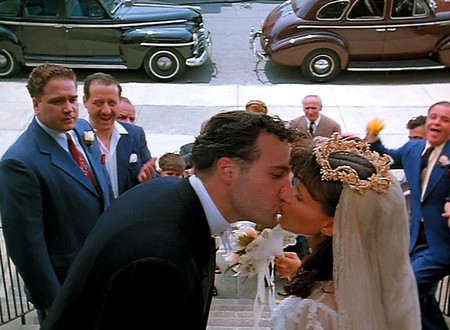 Joseph and Catherine have a gentle daughter, Teresa (played as a child by Rachael Bella and as an adult by Lili Taylor), who becomes obsessed with serving God and others. Whether she is a saint or insane isn’t clear; it may not matter.

In the novel, her mother’s family has heard that they are related to the actress Maria (Renée) Falconetti, who starred in Carl Theodor Dreyer’s The Passion of Joan of Arc (1928). It’s a fitting fancy for a neighborhood that treasures movies, memories, and miracles.