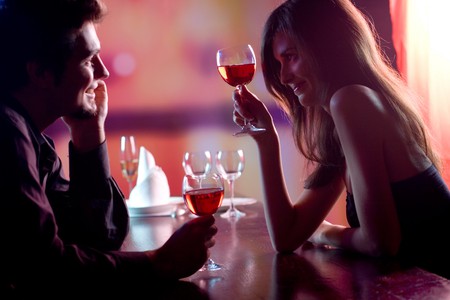 Our favorite NYC bartenders have already shared their advice on how to pick up someone at a bar. But did you know that, if they like you, they might play wingman to assist? Here are some of the subtle things they sometimes do to play cupid… and how you can ensure they’ll be willing to help you.

A bartender’s job is literally to throw a party every single night. And like any good party host, great bartenders delight in making connections between their guests, spearheading introductions and drawing strangers into conversations. And if you get on their good side, they might be inclined to play cupid between you and the hottie a few barstools away.

We’ve told you how to use the bartenderas an intermediary by sending a drink through them. But there are all sorts of subtle moves they’ll do as well, from instigating conversations they know might interest two people who should meet, to shuffling the seating arrangements at the bar to put two potentially compatible people together. As it turns out, bartenders actually love to play matchmaker. 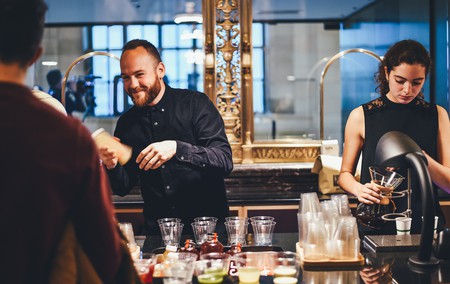 It’s essentially part of a bartender’s job to talk with their guests and get to know them. “For the most part, you will talk to everybody if you’re a good bartender,” says Zak Snyder, beverage director at Sons and Daughters of New York. And it’s less a requirement than a job perk, according to the bartenders we spoke with. “I like talking to people, and I like engaging people, and I like engaging my guests and getting my guests to know each other,” says Mellie Wiersma, a bartender at The Happiest Hour.

“Know your bartender. We can be your best resource,” advises Rafa Garcia Febles, a bartender at Covina and The Roof at Park South. “If we’re good at our job, we’re good at reading people and talking to people, and making sure people leave happy and want to come back. If you have a good vibe, if you seem a like a normal, well-meaning person and not a creep or worse, we probably want to help. And we definitely know people we can introduce you to.”

That’s not something they’ll just offer to do, and certainly not for just anyone. “We’re never going to just lean across the bar and go, ‘So are you looking to meet girls tonight? Is that why you’re here?’” says Matt Friedlander, the general manager at Sweetwater Social. “That’s just really sketchy and weird. But if you and I have become friendly and chatted the last few times you’ve been in, and I know you’ve been single for a while or maybe you’re getting over someone and you’re looking for someone to talk to, and I happen to think, ‘Oh, there’s actually someone I know at the end of the bar who I think you’d really enjoy talking to,’ that’s the way I do it. And the way you get there is simply by being a regular, being respectful, and knowing when to behave yourself appropriately.”

So how can they help?

They can initiate a conversation

“I have definitely engaged guests,” says Weirsma. “I love doing that. One of my favorite things to do is to get the entire bar talking to each other.”

“Making an introduction is the simplest and most direct thing,” says Garcia Febles. “I happen to work at a bar where, partly by the design of the bar itself, a lot of strangers strike up conversations. So it’s really easy for me to go to someone and be like, ‘Oh, someone who actually knows a lot about this is this person, who works in that industry,’ and then people are hitting it off and you made that introduction. And if they’re really hitting it off, I can do something like pouring a glass of bubbles for both of them so they have some nice festive beverages while they keep talking. The way I see it is, it’s all about starting some sort of connection.”

They’re in charge of the seating chart at the bar

At many nicer cocktail bars, guests are shown to specific seats by a host. Even at a less formal bar, the bartenders will often shuffle guests around, say, asking someone to slide down to free up two empty seats together. These arrangements aren’t always random. “There’s very subtle things you can do,” says Snyder. “It’s like you’re a little matchmaker. If somebody gets up and I have a seat extra I’ll be like, oh, can you move over so two people can sit together? So then all of a sudden they’re closer together, and then they may hit it off.” 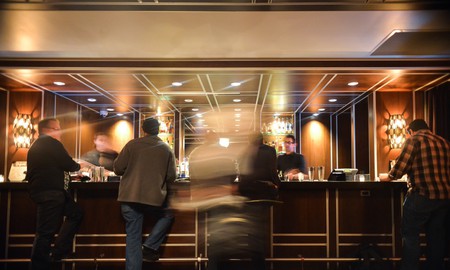 “I’ve worked in some cocktail bars where you’re not allowed to move seats, where you’re supposed to stay exactly where you are, and you’re not supposed to talk to your neighbor unless the bartender initiates it,” says Wiersma. “And I have literally moved people from one side of a bar to another to sit next to each other.” She told a story of how she once helped out when she noticed two guests making eyes at each other from opposite ends of the bar. “These two were flirting with each other,” she said, “and so I jigsawed my bar so these two would sit next to each other. I made it so it wasn’t blatantly obvious that I wanted these two people to sit next to each other, but I moved my bar around, musical chairs-style. They’ve been dating for three years.”

Of course, the reverse is true, too: “If I see that someone’s uncomfortable,” says Snyder, “I’ll be like, ‘Oh, I need this barstool for over here.’ It works both ways.”

No one wants to suffer the embarrassment of a rejected advance. And since bartenders talk to all of their guests, they might know when someone’s not open to meeting people and can warn you off. “I might know something you don’t,” says Garcia Febles. “I might say, ‘She’s actually having a rough night tonight.’” Friedlander agreed: “We probably know this person a little better than you do; we’ve probably been watching them a little longer than you have. We might know she’s not in the right headspace for it.”

And speaking of, be warned:

“I think the responsibility of a bartender,” says Wiersma, “is to be protective of everybody at your bar. Not just in how much they consume, but in who they are talking to.” It’s in their best interests to make sure their guests feel safe. “If you’re a drunken buffoon who’s yelling and throwing back shots and then going, ‘Do you know who that girl is over there?’ there’s no way I’m helping you with that, bro. There’s no way I’m doing that. Nor am I going to make any of our female guests feel uncomfortable,” says Friedlander. “Also if someone’s going, ‘I want to buy her a drink,’ and the woman’s not interested, and then he goes [pointing to someone else] ‘Well, then I want to buy her a drink,’ it’s like, come on, man. We’re not casting a wide net here.” 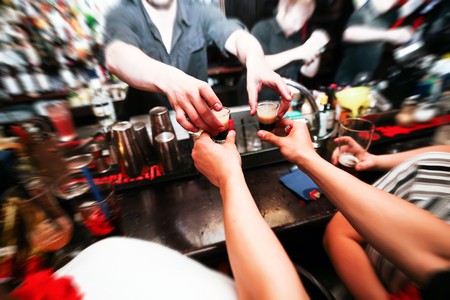 “There are circumstances where I say no,” says Snyder, “just because either the sender is too inebriated, the recipient’s too inebriated, or I’ve seen how the sender’s group is talking about women, and I’m not gonna put someone in that situation.”

So how do you get them to help you out?

Be respectful. Get to know them. Prove you’re a nice person

“What’s really helpful with getting the bartender on your side is, don’t be an asshole,” says Garcia Febles. “Chances are, if you treat the bartender like they’re not people, you’re not gonna treat my other guests like they’re people, and I’m not gonna want to help you. Just talk to me like a human being.” Wiersma suggests, “Talk to your bartender. Ask your bartender questions.” Basically, it boils down to, if you prove through your actions and conversation with your bartender that you can act like a normal person, they’ll trust you’ll be just as respectful to any guests they introduce you to. “I think the obvious thing is to be respectful, and to try and at least appear and behave sober-ish,” says Snyder.

It helps if you’re a regular

If you’ve been to a given bar before, and talked with your bartender, they’re going to have a good sense of who you are as a person: what you’re into, what you like to talk about. You’re also going to have developed a rapport with them similar to friendship. “It’s easier if you’re a regular,” says Snyder, “because then you feel the comfort with your bartender, and so if someone else comes into that, they’re going to be like, ‘Wow, this is a cool group of friends.’” 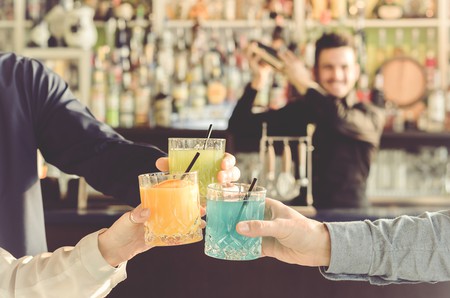 Being a regular also gives the bartender more social leverage when making an introduction. “They know us,” says Friedlander, talking about his bar’s regulars, “and so if we vouch for someone else, if I walk up to you and I go, ‘Hey, this is my friend Eric, really cool guy, I think you guys will get along really well,’ I think you’re a lot more apt to swivel and say, ‘Hi, how do you know Matt?’ and now you’ve got something in common, and that can springboard to other conversations.”

Of course, as Garcia Febles puts it, “The downside is, if you’re somebody who hits on someone every single time, it might be a little awkward to always do it at the same bar.”

Bartenders WANT you to meet someone at their bar

“There’s an old expression about bartenders,” says Garcia Febles, “which is, We’re doing our job right when we’re not getting people drunk, we’re getting them laid.” Bartenders want you to leave their bar happy, and are willing to do what they can to make it happen. When asked whether he enjoyed his matchmaker role, Snyder said, “Absolutely. It’s like when a guest drinks one of your cocktails and they really like it; it’s the same thing. You’re like, ‘I did good. As a hospitable person, I accomplished that.’” 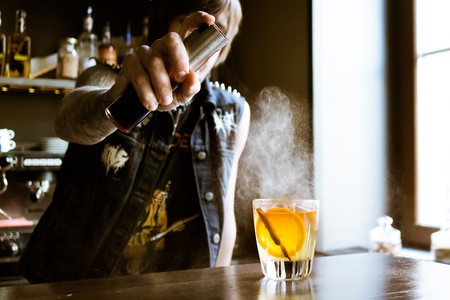 Making a connection for the night is great; a longer-term one is even better. “Bars are meant to be social environments, and we want people to meet each other, and we want people to get along,” says Friedlander. “And if we can get you a little bit drunk and you’ve had a good time, that’s great. If you wind up getting laid that night, then fantastic! And if you wind up entering a relationship with the person you met at my bar, and then you come back three years late and go, ‘We’re getting married and we met right here,’ that’s awesome!”

Wiersma echoed his thoughts. “Part of the enjoyment of going to a bar is you can let loose and relax and have a nice time,” she said. “And if part of that nice time is that you’re feeling lonely and you want to meet somebody, I can help you do that—even if it’s just for one night. I can definitely find somebody who’s your one-night stand. But I would prefer to find somebody who’s your life-night stand.”