Where to Ring in the New Year in New York 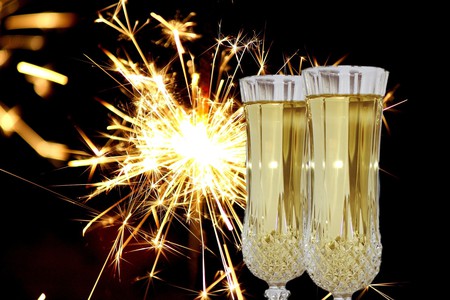 No matter your celebration style, there’s always a perfect place to party in NYC on New Year’s Eve.

The thing about New Year’s Eve is, everyone likes to celebrate it differently. Maybe you want a late-evening multi-course meal at a stellar restaurant. Maybe you’re willing to fork over a tidy chunk of cash for an open bar at a fantastic cocktail spot. Or maybe you’d prefer somewhere that’s carrying on more or less as usual. No matter which situation you’d prefer, we’ve got you covered. Here are our picks.

For a blowout meal at a fantastic restaurant

The NoMad Bar, from the team behind Eleven Madison Park, is going all out for New Year’s Eve. There are two seatings; you want the second one, starting at 8 p.m., which is $175 per person for a four-course prix fixe menu which starts with an indulgent seafood platter, moves on to dishes like tuna carpaccio and ribeye with black truffles and bordelaise, and ends with—if you choose correctly—Brooklyn blackout cake. Rumor has it that there’ll be surprise entertainment at midnight. Note that the price doesn’t include beverages … and you’ll definitely want some of the bar’s cocktails, since it was named Best American Bar Team at this summer’s Tales of the Cocktail Spirited Awards and is one of our personal favorite places to knock-back a few.

NYC’s food cognoscenti agree that Le Coucou is one of the best new restaurants of the past couple of years. If we had some cash to burn, we’d join them for their New Year’s eve six-course “dinner party,” which, at $895 per person and with a festive-formal dress code, is sure to be a true blowout bash. Starting at 7 p.m., the evening is promised to include live music and dancing between tables.

“This Parisian-inspired dining experience located at 138 Layfayette Street in SoHo is a prime spot for an elegant brunch photo. The interiors, designed by Roman and Williams, evoke a ‘gracious modern nod to fine European gastronomy, with crisp linens, flickering candles and whitewashed brick.’ The airy, polished design offers a lively ambiance that is sure to add a little sparkle to your #dreaminteriors selfie.” Thanks for including us in the “Most Instagrammable Restaurant Interiors in New York City” list, @culturetrip! // ?: @lusttforlife

The Upper East Side’s Flora Bar, housed in the lower level of the Met Breuer, is an elegant place for a New Year’s celebration. Again, you want to join for the second seating, starting at 8:30 p.m., where $275 per person gets you a seven-course meal with dishes such as sea urchin with burrata, duck breast with foie gras, and a caviar course. We trust that Matthew Kudry, the head sommelier, will be able to recommend an excellent sparkling wine to accompany your meal.

For getting festively tipsy on incredible cocktails

Porchlight, the Southern-themed bar from restaurateur Danny Meyer, is transforming into “Camp Porchlight, Winter Lodge” for New Year’s Eve, conjuring a cozy après-ski retreat. Your $175 ticket gets you food and and an open bar between 9 p.m. and 2 a.m., including a dozen different craft cocktails and snacks including hush puppies, braised short ribs, and chocolate fondue, as well as live bluegrass, blues, and country music. The dress code is “cozy winter casual”—think jeans, flannel shirts, and puffy vests. 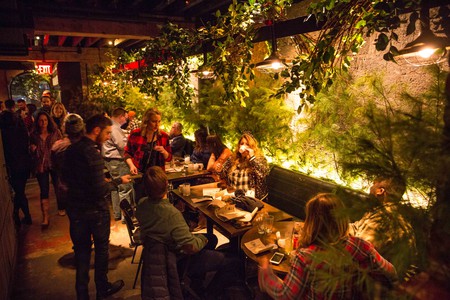 BlackTail, a swank bar that harkens back to Prohibition-era Cuba in both décor and drinks (and which also happened to be named the best new bar in America this year) is hosting a festive night; a $120 ticket gets you two complimentary cocktails between 10 p.m. and 2 a.m. plus a prosecco toast at midnight and entertainment by a vintage jazz band.

Pouring Ribbons, one of our favorite spots in town, is offering an open bar from 9 p.m. until 2 a.m. for $100 per person. In addition to their fantastic cocktails, they’ll have punch, snacks, and a Champagne toast at midnight. Email events@pouringribbons.com for a reservation.

For a low-key night, but in a new place this year

The Lost Lady, opened this past autumn by the team from The Wayland, is always a chill, low-key cocktail option. It’ll be that way on New Year’s Eve, too.

Vini e Fritti, a great new Roman-style bar from Danny Meyer’s team, offers plenty of spritzy cocktails and good-value Champagnes for whichever way you prefer to get your bubbly on.

What always goes with New Year’s Eve? That’s right: ? We’ll be open from 2pm until 1am on #NYE with some seasonal specials that go perfectly with bubbly, such as this #Champagne ‘Expression’ Brut, Rene Geoffrey.

Hanoi House, a casual Vietnamese spot that’s one of our favorite new restaurants of the year, ordinarily doesn’t take reservations; dining there nearly always involves a wait. They’re actually taking table reservations for New Year’s Eve, though (email: info@hanoihousenyc.com to secure yours), while everything else is business as usual there.