What to Wear to Get Into a New York City Nightclub 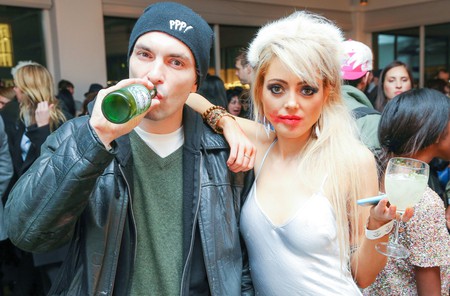 Cielo, Provocateur, Le Bain, The Box, Output. These are just a few of New York’s best dance parties, but in order to boogie with the city’s most fabulous, you’ll have to make it past the velvet ropes. And if it feels like the doormen are judging you, it’s because they are. So what do you wear to get into a New York City nightclub? Whether you’re new to New York or just new to its nightlife scene, check out what all the cool kids are wearing for inspiration.

Cat Marnell and The Fat Jewish

Could these two be the king and queen of New York nightlife? Perhaps, although after penning a New York Times bestselling memoir, Marnell is rumored to have given up her party girl ways (say it’s not so).

International model on the rise, Richie Shazam is a fixture in New York nightlife. Here he is with supermodel Ashley Smith at Jia.

Stylist and party-gal-about-town, Briana Andalore is famous for flaunting her curves. Here she is, working a flesh-colored spandex playsuit, is in front of the Lower East Side’s Sapphire Lounge.

Custom jeweler, Jules Kim, who makes baubles for Rihanna, Erykah Badu, and Beyoncé not only goes to the hottest parties in New York, she also throws them. Here she is with DJ Nianga Niang at her summer rooftop party Le Bain.

Vibe curator Katie Longmyer travels the world making events pop off. Here she is at a secret basement party (sorry, invite only).

Model and professional boxer Charlie Himmelstein suits up on the Bowery, proving that even bad boys can clean up.

Photographer Yana Tober knows the value of a good accessory. Here she is backstage at New York Fashion Week. It’s not a nightclub, but you can be sure there was an afterparty.