What Really Haunted the Writings of Shirley Jackson?

American horror writer Shirley Jackson has long been popularly acclaimed but critically under-recognized. A new biography seeks to find out what really lay underneath a mysterious author known, in her time, both for her morbid stories and homey articles.

“Miss Jackson writes not with a pen but a broomstick.” Those words were written in 1948 in an Associated Press profile, but they might as well have been on Shirley Jackson’s tombstone. The broomstick line caught fire with a reading public in shock after the New Yorker publication of ‘The Lottery’ a year earlier, now arguably the most famous American short story published in the twentieth century. In it, the ‘winner’ of a lottery — a middle-aged wife and mother — is stoned to death by a village as part of an annual ritual to assure good crops. Within days of the issue hitting the newsstands, Ms. Jackson began to receive letters, hundreds of them, written by people both appalled and curious to know if the story was based on actual events.

Jackson may have hammed up her theurgic reputation (her and her publisher brainstormed witch-based marketing schemes), but she was also a woman as comfortable in a kitchen apron as she would have been in a pointed hat. Revealing the enigma of Jackson’s character is the challenge taken up by the respected biographer and critic Ruth Franklin, the author behind the newly published Shirley Jackson: a Rather Haunted Life. In this scrupulous and vigorous work, Franklin examines the two dichotomies that governed Jackson’s life and work: First, that while known for her eerie fiction, Jackson also published Rockwellian personal essays on homelife and housewifery; and second, that while a popular writer in both genres, she was never given any official recognitions. As her husband, the literary critic Stanley Edgar Hyman, lamented after her death: “She received no awards or prizes, grants or fellowships — her name was often omitted from lists on which it clearly belonged.”

Jackson hasn’t been the only beloved genre writer to be snubbed by critics. Stephen King, to take one critically dismissed writer, has long argued that his novels are justifiably “literary.” And as Franklin adroitly points out, so too are Jackson’s works: “No writer since Henry James has been so successful in exploring the psychological reach of terror.” Exactly Jackson’s wheelhouse: “I have always loved to use fear,” she wrote, “to take it, and comprehend it, and make it work.” And it was Jackson’s own fears, initially inspired by her mother’s lifelong criticisms, as well as marriage’s periodic turbulences, that led her to throw herself so fully into her cultivating her writing career and caring for her children. 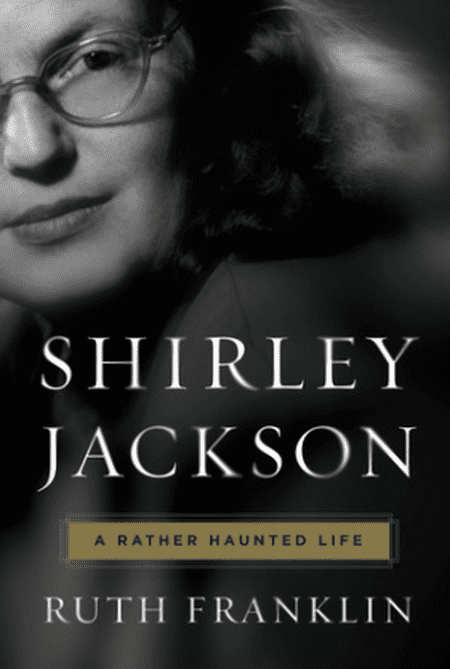 That Jackson could spin these concerns into spellbinding allegories set in disturbing residences — The Haunting of Hill House, The Sundial, and We Have Always Lived in the Castle — is a testament to her prodigious talents. Still, Henry James was never accused of being a warlock for writing The Turn of the Screw. That Jackson didn’t dispel the notion that she dabbled in witchcraft is another matter — it held for her, as Franklin points out, an inherited allure. Along with a number of odd deaths notched on Jackson’s family tree (with many residential architects among them), her grandmother, Mimi, was a Christian Science spiritualist who would have her daughter and granddaughter sit with her as she consulted the Ouija board.

Spirits, however, were less of a fright to Jackson than her own mother. Geraldine Jackson tried to raise her daughter in her own social likeness — in both dress and manner — and when that failed, she took to needling Jackson with criticism: “Why oh why do you allow the magazines to print such awful pictures of you,” Geraldine once wrote after a profile of Jackson appeared in Time. “If you don’t care what you look like or care about your appearance why don’t you do something about it for your children’s sake.” Jackson penned a seething response, but never sent it. Franklin adroitly highlights how many Jackson’s books include acts of matricide, “either unconscious or deliberate.”

Though her relationship with Hyman wasn’t nearly as catty, it was no less fraught. Franklin gives evidence suggests that Jackson and Hyman arguably made for better friends than lovers. The two lived the bohemian life in New York City, bonded intellectually, and shared an enthusiasm for notable guests (the couple’s familial relationship with Ralph Ellison and Jackson’s dalliances with Dylan Thomas are engrossing to read about). But in private Jackson rebuked her husband’s libido, which spurred him to both infidelity and, in one terrifying incident that occurred early on in their marriage, rape: “He forced me God help me,” reads a terrifying journal entry, “and for so long I didn’t say anything and only get out of it when I could and now I’m so afraid to have him touch me.” Franklin devotes a page to the episode, speculating that the episode may have inspired a similar scene in Hangsaman but rather than make him out to be a monster, Hyman is mostly depicted as Jackson’s biggest literary advocate.

One thing Franklin makes clear — Jackson’s writing was never indebted to Hyman for its success. Despite his employment as a New Yorker staff writer, Jackson was published in the magazine without Hyman’s intercedence. And from her first byline to her last Jackson always kept her maiden name. By splitting the role of writer and wife Jackson was to achieve “relative anonymity.’ Franklin writes: “When the family moved to Westport, Connecticut, after the publication of ‘The Lottery,’ many of their neighbors did not realize that the woman they knew as Mrs. Stanley Hyman was the writer Shirley Jackson.” When Jackson was later outed by a journalist, the family moved to Vermont.

Then there is the question often asked of Jackson: why a writer with a reputation for dark literature felt compelled to write light pieces for sunny venues as Good Housekeeping? The answer is simply money: “At a thousand bucks a story,” Jackson wrote to her mother, “I can’t afford to change the state of popular fiction today, and since they will buy as much of it as I write, I do one story a month and spen[d] the rest of the time on serious work.” Jackson had a knack for these easy-going pieces later collected in Life Among the Savages. And unsurprisingly, she found herself as someone other domesticated housewives looked up to. Franklin points out that “her files brim with fan mail from admiring readers, many of them mothers who were aspiring writers in search of advice.”

Franklin is especially skilled in putting into focus the kind of domestic situation these women could be found in. She highlights a disturbing ad from the Bell Telephone company dating from 1957 that shows the housewife, “the pretty girl you married,” in her various household roles all intended to serve the husband and family. So strongly was the wife’s importance to the household drilled into young women that magazine pieces warning of the consequences of trying to balance career and family were published regularly.

As Franklin reveals, Jackson, herself a doting mother of four, didn’t fight against this stereotype as much as analyze it, such as in her work The Bird’s Nest (1954). Having a female protagonist afflicted with conflicting personalities, Franklin argues, was a response to “the interest in multiple personality disorder that was rising as a cultural anxiety surrounding the reorientation of women’s lives within the public sphere. The idea that a woman’s identity might comfortably encompass more than one persona […] threatened a male-dominated culture invested in glorifying the stability of family life.”

After The Bird’s Nest, Jackson would return to her fascination with haunted houses and their spooked residents. Yet despite roaring reviews and sales, critical recognition alluded her. Jackson’s biggest nod from the literary world would be The Haunting of Hill House (1959), which was nominated for the National Book Award in 1960 (awarded to Philip Roth’s debut Goodbye, Columbus). After passing away in 1965 at the age of 48, Jackson fell into relative obscurity, yet in recent years her reputation’s been revived and championed by several literary titans — Donna Tartt, A.M. Holmes, Jonathan Lethem — no doubt in part due to Franklin’s efforts (a few chapters have previously appeared as excerpts). If there is but one bothersome aspect of A Rather Haunted Life, it’s that it stops dead at Jackson’s demise, with no epilogue about what rekindled interest in Jackson’s oeuvre or where her newly discovered works (now being released) were found. But this is a small quibble against a biography that is undoubtedly definitive in every other regard and the perfect cap to Jackson’s modern canonization as a major American writer. After all, Franklin didn’t set out to write A Rather Haunted Afterlife.