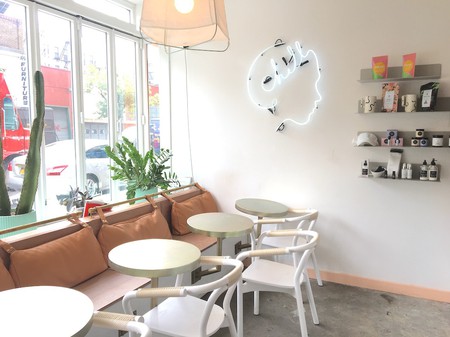 If ever there was a city that needs a Chillhouse—a hip space to hang-out, refuel (healthily), and pamper—it’s New York.

Stepping through the front door feels like a giant exhale. The café decor—furniture made from neutral materials and pretty green foliage—makes it the kind of place you can plonk down and skim-read a magazine or focus on work, uninterrupted. On the other side of a glass partition women are having their nails painted, and at the back of the building white canvas curtains veil massage rooms.

“We work really hard and we’re night owls, so we wondered—what’s the thing that can offset that?” says Cyndi Ramirez, who co-founded Chillhouse with her husband Adam Fulton. In many ways the couple are quintessential New Yorkers—busy juggling successful careers (in digital lifestyle media and hospitality) with social plans, while also trying to actively prioritize time for self-care in ways both big and small. 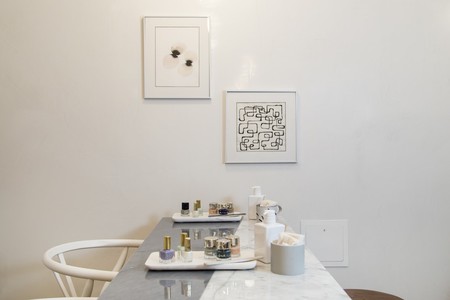 “[At Chillhouse] you can come in and have a relaxing matcha or turmeric latte, and then a manicure. [A manicure] to me is the first step in self-care. It’s something that we, as women, get regularly. And then a massage is the ultimate form of relaxation. So we came up with this three-part hybrid and we found that this combination really worked for us,” she says.

In a city that seems to offer only hyper-luxe spa massages for $250 or Chinatown body rubs for $30 USD, Chillhouse occupies an affordable, ethical, midway point spanning $45–$115. I opt for The Works—a Swedish-style massage—with the add on of aromatherapy oils.

My therapist, Alex, is extremely caring, and after a 55 minute treatment, provides me with after-care advice including specific yoga posses that will help me get the most out of my looser, more relaxed muscles.

In most spas there isn’t much of a soft landing beyond a glass of water, but at Chillhouse you exit through the health-food café. There’s time to sit and drink a green tea while mentally preparing yourself for the energy of the world outside. Equally, it’s a great place to regain your momentum and soak up the calm, even if you’re not getting a treatment. In short, Chillhouse is the safe harbor every New Yorker needs now and then.