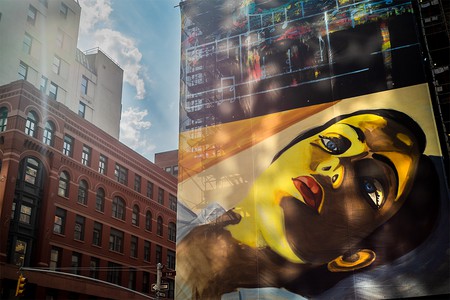 Towering over East 28th Street at 44 by 66ft, David Salle‘s Solar System portrays a celestial abstraction hovering above a portrait of a contemplative blue-eyed woman. Around the corner on Fifth Avenue, Swamp Music – a similar composition depicting musical measures set to an Expressionist backdrop over a portrait of a woman with pensive blue eyes (perhaps the same subject) – looms at 47 by 70ft. Both artworks are large-scale versions of two paintings by Salle from 2013. 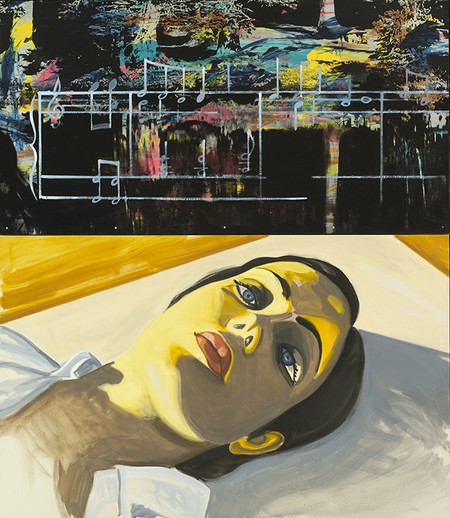 These imposing images are installed on the limestone and terracotta façades of an early 20th-century edifice by architecture firm McKim, Mead & White. Located at 250 Fifth Avenue and East 28th Street in the NoMad neighborhood of Manhattan, the building is undergoing restoration by a new luxury hospitality group, Flâneur Hospitality, which will reopen the space as a hotel in 2019. Both Solar System and Swamp Music evoke the spirit of a flâneur, the French term for a “stroller,” or a leisurely passerby. 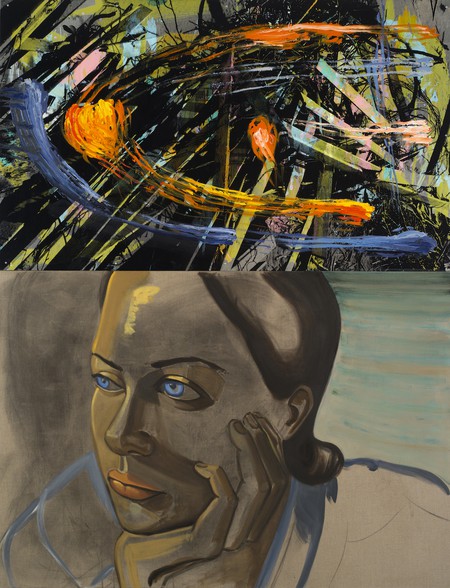 Salle, a Neo-Expressionist painter, photographer, printmaker and designer who gained prominence in the 1980s for large-scale compositions, merges Pop-influenced, collage-style images with figurative portraiture bearing an edge of mystifying Surrealism.

“I’ve always been interested in big scale,” Salle tells Culture Trip. “I designed a number of sets for ballets that were danced on big proscenium stages, sometimes with backdrops 45ft tall and 60ft wide. I love seeing my images at that scale. I mostly make art for museums. That is to say, the work is dense, and slow and it aims high, aesthetically. I also like the idea of making billboards, which are fast. My art is for everyone; that is to say, anyone who wishes to can engage with it.”

In a statement, Salle elaborates on his vision for the contemporary New York City flâneur: “Someone is walking down Fifth Avenue, thinking her own thoughts, noticing other people on the street, admiring a certain building, feeling the sun on her face, when suddenly, for no reason, she looks up and sees a giant woman’s face looking down at her, with musical notation floating over her head. The flâneur’s gaze meets that of the woman in the painting. The one’s gaze is returned, just for an instant. Somehow the encounter seems natural, part of our world. The flâneur continues walking, carrying the image in her head as she walks.” 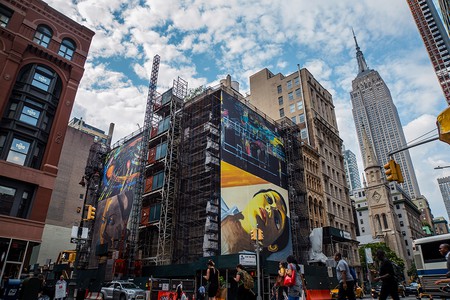 Flâneur Hospitality’s art advisor Elizabeth Margulies brought Salle on board to, as she explained in a statement, “infuse this sense of imagination onto the façade as the works themselves interject a powerful image of contemplation and discovery – a juxtaposition of the internal life and the urban environment.”

Margulies continued: “David’s work encourages reflection, individual contemplation, and the diversity of lived experiences – a credo that lives at the heart of the flâneur. Our goal for the project is to get people to slow down, look up, and take in a brief moment of serendipity and discovery amidst the bustle of Fifth Avenue. This activation is also indicative of the unconventional engagement with art that you can expect to find in the hotel.”

Swamp Music and Solar System will remain on view for the duration of the building’s indefinite restoration.