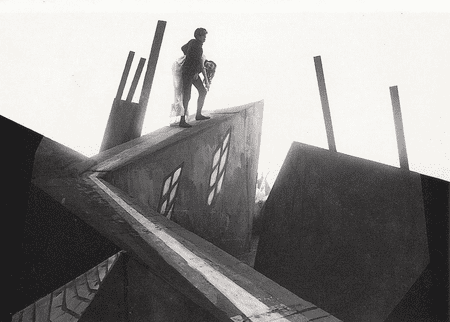 Intense, Dark, Creepy: Three words that sum up the film genre of German Expressionism. The genre became prominent in the 1920s and sourced a lot of influence from the events and emotions gone through by the survivors of WWI (1914-18). This is why German Expressionist films depicted reality with intensified emotions, such as extreme happiness or fear. Horror films of the time used deformed monsters as their subjects, since they represented the injured soldiers that had suffered severe deformations.

German Expressionism is also known for its particular stylistic form. As the film medium had only been established 25 years ago, filmmakers were still experimenting with it. With no sound, acting and set designs had to be exaggerated to make up for it. Also, since all films were still made in black and white, extreme lighting was used to create shadows. Here are our top five films from the era that depict this genre.

Made in 1915, The Golem is the first of three films that director Wegener made about the character. The 1915 version is about an antique dealer who finds a clay Golem that a rabbi brings to life. The Golem soon falls in love with the dealer’s daughter who becomes ‘his precious’. Since the daughter rejects him, he starts to commit crimes around the town as revenge. This story was based on a Jewish legend about the Golem of Prague who was said to be the protector of Jews.

The Cabinet of Dr. Caligari

This is arguably the most famous German Expressionist film. This silent horror film, made in 1920, depicts a crazy hypnotist that makes his subject kill. Are we seeing a trend here? Made shortly after WWI, the director wanted to portray how the government had manipulated individuals in wars. In Dr. Caligari the authoritarian figure is represented by the hypnotists. He was a symbol for German war leaders, whereas the innocent man signifies the German soldiers who were told who and how to fight. The sets were made out of paper, creating the dark shadows. Strong lighting and contrasts were key features used in German Expressionism. Everything about this film defines its genre, which is why it is a must for Film geeks.

Nosferatu is an old Romanian word for vampire, which is why this film is also a horror film. Although, the monster Nosferatu only has 10 percent of airtime, his impact is felt throughout the film. It was made in 1922 and shares many similarities to Dracula. It actually shared too many resemblances to Dracula, which is why the studio was sued for copyright issues. In order to avoid any legal issues with the author, the film production actually shut down after this film was made. Thus making Nosferatu the one and only film the studio produced. However, this ‘Dracula’ film successfully portrays the suffering of the character, rather than all the other commercial versions that followed. This anguish was once again a metaphor for the German post-war people who were still mourning over their losses and injuries.

Made by Fritz Lang in 1927, Metropolis is often overlooked but it was one of the great masterpieces of its time. The film is about a utopian world that is strictly divided between a prosperous haven, and a secret underground world. In other words, the wealthy and the workers. The director came up with this idea when he first saw the skyscrapers and the street of New York City. Being Jewish, Lang later moved to the United States to escape the Nazis. Unlike other Jews at the time, Hitler was not persecuting him, since he was such a great fan of his work. However, the director thought it was best to leave. To create this fictitious city, Lang invested (what would today equal) $200 million into this film. That is the same kind of budgets spent on popular sci-fi films today, such as Star Wars and Avatar.

M is yet another masterpiece of Fritz Lang. Lang was known for his harsh directing and wild ideas during filming. For this film, he wanted to include real criminals to add a realistic factor. Released in 1931, the genre had matured and the extremist nature of German Expressionist films from the 20s had died down. Horror films turned into thrillers and dangerous, fictional monsters turned into cold-hearted murderers. One way to interpret this shift is that with the continuous crime and power struggle in Weimar Germany, filmmakers were focusing more on the ‘real’ monsters of society. Something else that changed in the 30s is the introduction of sound. M is the directors’ first sound film.

The majority of these films have been forgotten or even lost. Yet, they have paved the way for modern cinema and moviemakers. They invented new genres such as science-fiction and horror and even depicted the first vampires and zombies.