New York City has a rich history. Believe it or not, there was a time when New York was not filled with huge buildings – and there was even a time when it was not called ‘New York.’ But NYC is the way it is today due to its past, and we define ourselves as New Yorkers based on these historical events. 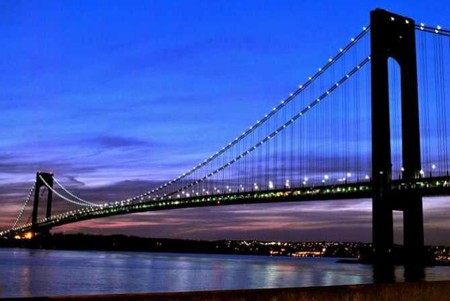 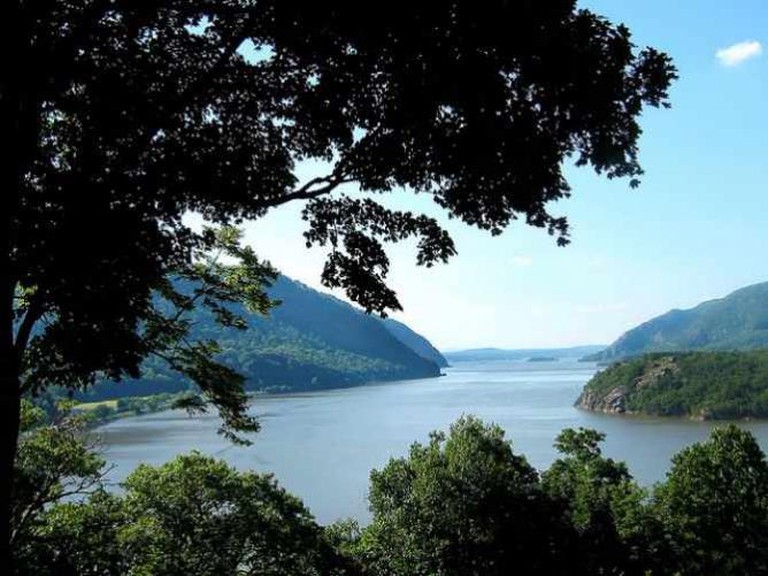 Hudson River ~ West Point, New York | © Elizabeth Bean/Flickr
Under the commission of French King Francis I, Giovanni da Verrazzano, an Italian sailor, travelled to the New World in 1523. He was the first explorer since early Norse sailors to travel to North America. In his journey, he travelled from Florida to New Brunswick. He encountered the Lenape tribe in New York when he entered the New York Bay in 1524. The Verrazano-Narrows Bridge, which opened in 1964, was named after this important explorer (though it spelled his name incorrectly).
Open In Google Maps
Verrazzano-Narrows Bridge, Staten Island New York, USA
+12123603000
Visit Website
Give us feedback

Having worked for the Dutch and the English at different times, Henry Hudson explored North America with the hopes of finding a northwestern passageway that would lead to the Asia. After two attempts with the British, Hudson was commissioned by the Dutch East India Company. During this expedition in 1609, Hudson and his crew sailed to New York and up a river to present-day Albany. This river is now named after him: the Hudson River.

Established during the Dutch Golden Age in the 17th century, New Netherlands was a Dutch colony in the New World. It contained New York, Connecticut, New Jersey, and Delaware. New Netherlands was created to gain a strong foothold in the important New World fur trade. It was during this time that Peter Minuit, the director of the Dutch West India Company, bought the island of Manhattan from the natives. The effects of this colonization is still seen in location names, which combined Native American and Dutch languages, like Manhattan and Hackensack.

In 1664, English King Charles II promised New Netherlands to his brother, the Duke of York, even though the territory was still under Dutch control. When warships approached New Amsterdam, director-general Peter Stuyvesant conceded the colony to the English, who renamed the territory “New York” after the Duke. The Dutch recaptured New York in 1673 and renamed it New Orange, but they returned it to the British in 1674 to regain control of Suriname. 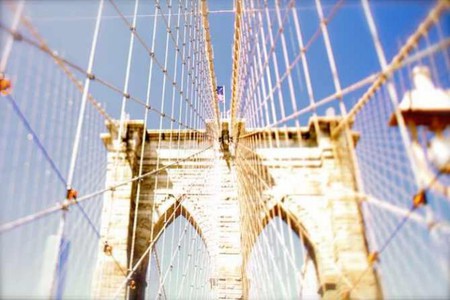 John Augustus Roebling began construction of the Brooklyn Bridge in 1869, until he became sick and passed the challenge to his son, Washington Roebling. Washington was physically injured shortly after in 1870, which left him watching construction from his window as his wife, Emily Warren Roebling, worked with both her husband and the bridge’s engineers. The bridge opened on May 24, 1883. To quell rumors of the bridge’s weaknesses, P.T. Barnum led 21 elephants across the bridge on May 30, 1883. The bridge was the largest suspension bridge at the time, and it continues to awe travelers and onlookers.
Open In Google Maps
Brooklyn Bridge, Manhattan New York, New York, 10038, USA
Visit Website
Give us feedback 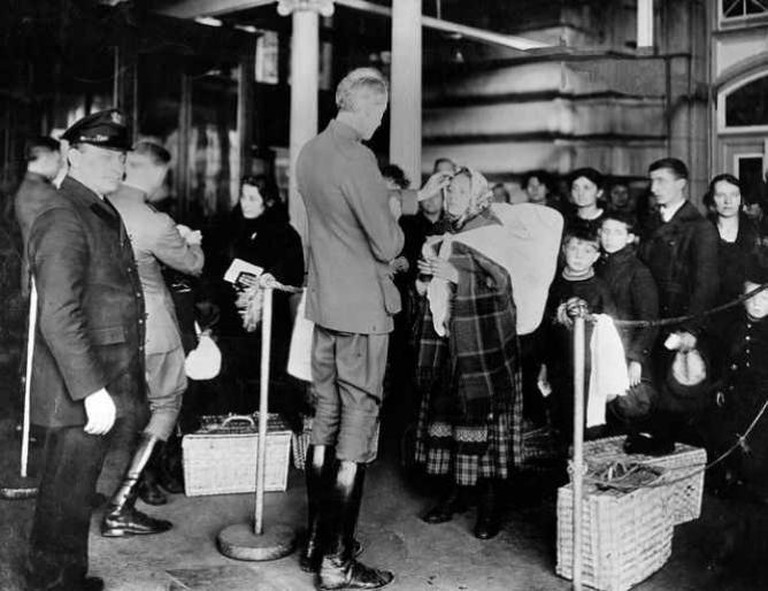 Ellis Island Public Health Service Physicians | © NIAID/Flickr
Lady Liberty, who opened in 1886, is perhaps the most iconic symbol of New York City. Inspired by Édouard René de Laboulaye, an ardent abolitionist, the Statue of Liberty was a gift from France to celebrate the Union’s victory in the American Civil War. The symbols of this monument include her torch, tablet of law, and broken chains. The downtrodden saw the U.S. as a place of hope, and the Statue of Liberty symbolized the freedom available to them there. Tourists can still climb the steps to the crown and take in the beautiful panoramic view of NYC, though access to the torch has been barred since 1916.
Open In Google Maps
New York City, New York, USA
Give us feedback 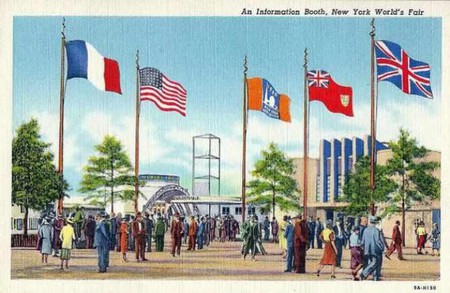 Early world’s fairs focus extensively on industrialization, and they showed the importance of scientific advances and technology. This, however, changed when the World’s Fair was hosted in New York City from 1939 to 1940, where the theme was “Dawn of a New Day.” Countries from around the world participated in it, and the fair attracted about 44 million people. Unlike earlier world’s fairs, the 1939-40 New York World’s Fair focused on culture and society rather than technology. One exhibit was a time capsule that included a Mickey Mouse Watch, cigarettes, and writings by Einstein.

Headquarters of the UN

The United Nations, or UN, was founded in 1945 after the conclusion of World War II. It was originally formed with 51 member states, but has since grown to include 193. The UN’s Security Council used to meet in London. In 1952, however, New York City became the headquarters for the UN. New York City holds the General Assembly, Security Council, Economic and Social Council, and Secretariat, which are four of the main components of the UN (not including the International Court of Justice in the Hague).
Open In Google Maps
Manhattan New York, New York, 10017, USA
+12129634475
Visit Website
Give us feedback

In 1977, the ‘I Love New York’ logo became the symbol of an advertising campaign for tourism in New York City. The image came from Milton Glaser, a graphic designer, whose work has continued throughout New York. In tourist shops and on signs throughout the city, the ‘I Love New York’ slogan remains prominent to this day. It is impossible to walk through Times Square without seeing this icon. 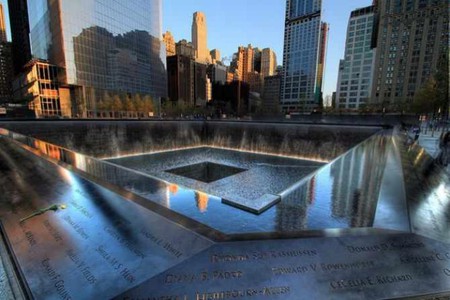 1993 Bombing of the World Trade Center

On February 26, 1993, a group of terrorists detonated a truck bomb beneath the North Tower of the World Trade Center. Their goal was to have the North Tower collide with the South Tower, resulting in the deaths of thousands. Their plan failed, but six were killed and about one thousand were injured. A memorial to the six who lost their lives was set by a pool in the North Tower, but this was destroyed during the attack of September 11, 2001. 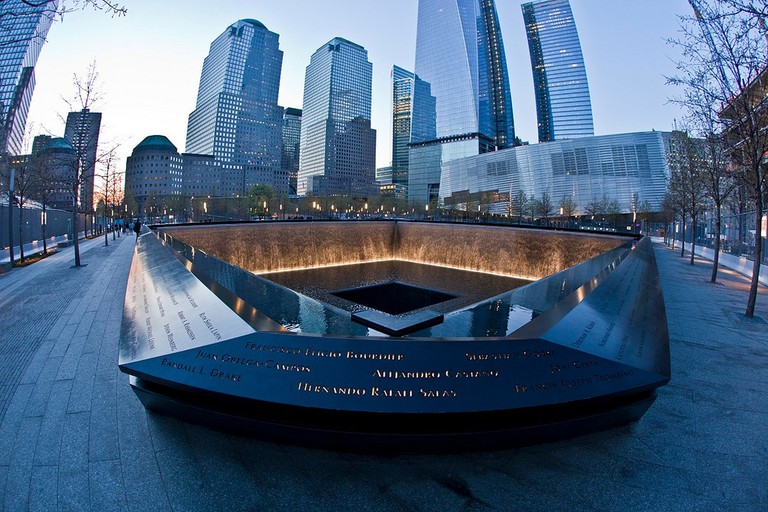 Inside the September 11th Memorial in New York City | ©Anthony Quintano
New York will never forget the tragedy of September 11, 2001, when terrorists from al-Qaeda attacked the World Trade Center and Pentagon. Almost 3,000 were killed and over 6,000 were injured, and everyone felt pain for what had happened. Shortly afterward, the U.S. launched the War on Terror. Now at the 9/11 Memorial, visitors have the opportunity to remember these events and the people who lost their lives. The museum, memorial, and Freedom Tower all stand to show the resilience of New Yorkers, who will never forget.
Open In Google Maps
180 Greenwich Street, Manhattan New York, New York, 10007, USA
+12123128800
Visit Website
Give us feedback
Give us feedback