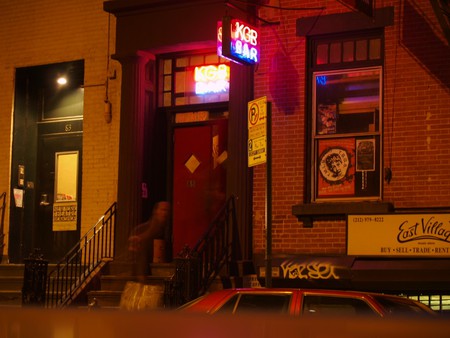 When KGB Bar opened its doors in 1993, it quickly gained a reputation as a literary bar. The bar plays host to a variety of readings and events and is an especially popular venue for emerging work that struggles to find a home in more established spaces.

“I didn’t know there were expressly ‘literary’ bars in New York,” says Mickie Meinhardt, host of a new reading series housed at KGB, Same Page Reading, “and it always stuck out to me as a place that seemed to survive the purge of cool, eclectic places that promoted interesting art on the margins.”

The bar’s name is technically an acronym for “Kraine Gallery Bar” (“Kraine” as in “Ukraine,” without the “U”). It wasn’t until 2000 that the owners of KGB hung a titular sign in front of the nondescript East Village building. The name and the Soviet theme of the bar are both references to the building’s former life as the Ukrainian Labor Home, a social club for Ukrainian socialists in the McCarthy era. 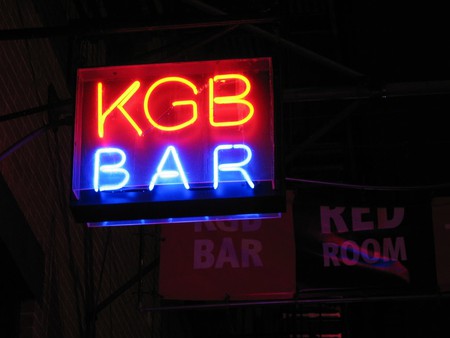 The bar’s founder, Denis Woychuk, was raised attending those functions with his family, but in those days there was no Soviet propaganda on the walls. When Woychuk opened his bar, he leaned hard into the Soviet theme, painting the walls red and showcasing World War II- and Cold War-era paintings and posters.

KGB also tapped into a local obsession with literature. “It really fosters and supports literary New York and uses its reputation for that for good,” Meinhardt explains.

From the beginning, KGB has encouraged established authors and emerging voices alike to share their work from within its halls. The bar has a policy of not paying people to read their works to audiences, but they also don’t charge audience members for their seats. Attendees are encouraged to grab a drink, as it helps to pay the bills, but imbibing is not a requirement. This is the kind of work people do out of passion, not for money.

The bar does manage to keep its calendar packed: Monday nights feature poetry and Sunday nights are dedicated to fiction, but all other days are a mix of book launches, reading series, and even the occasional burlesque show or absinthe tasting.

The variety alone promises a fun-filled night any time at KGB, a New York City institution which will be entertaining book lovers for decades to come.