Andrea Wan, 'If Not Not, When?' | Courtesy of Women x Women

On May 19, Women x Women was unveiled on Manhattan’s Lower East Side. Designed from the ground up to support and empower female artists, 11 outstanding women have been hand-picked to exhibit one artwork that they feel best embodies their frustration with gender inequality.

In 1989, the Guerrilla Girls (an anonymous feminist activist group whose members don gorilla masks) famously publicized that 85 percent of artworks depicting nude subjects at New York City’s Metropolitan Museum of Art and MoMA portrayed women, yet only five percent of artworks in each respective collection were made by female artists. Over 20 years later, a subsequent report from 2012 reflected disappointingly similar statistics.

In an effort to combat gender inequality in the art industry (or to at least kickstart a conversation), shopping website Tictail has partnered up with fine art retailer Absolut Art to launch Women x Women: “a discovery-based art fair that looks to call attention to the narrow lens through which women are depicted in art, and scrutinized by the world at large.”

Ahead of the art fair’s inaugural launch, the retail duo chose 11 women to each create one artwork that accurately embodies their exasperation with history’s long and relentless tendency towards female subversion. The artworks also react to the ways in which women are objectified by men as subjects of “the male gaze”. 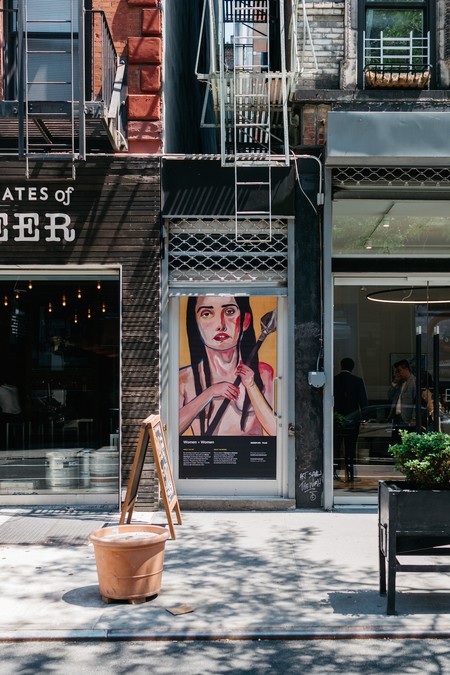 Each of the 11 artworks by Miranda July, Maria Herreros, Carly Kuhn, Kristin Texeira, Andrea Wan, Carla Fuentes, Shawna X, Jeanette Getrost, Malin Gabriella Nordin, Jenny Källman, and Elise Peterson are currently displayed across one of Manhattan’s busiest neighborhoods in outdoor points of interest where they can’t be ignored. In addition,”visitors to the fair will be able to track each piece around one of the city’s most creative neighborhoods while learning more about each artist through an interactive digital map.”

Local neighborhood businesses, including Irving Farm, Hotel Chantelle, and Essex Street Market have partnered with Women x Women to exhibit the unique artworks. Each of the murals will be available for sale at Tictail Market and online at Tictail.com and AbsolutArt.com. Ten percent of the proceeds will be donated to esteemed non-profit organization, Women for Women. 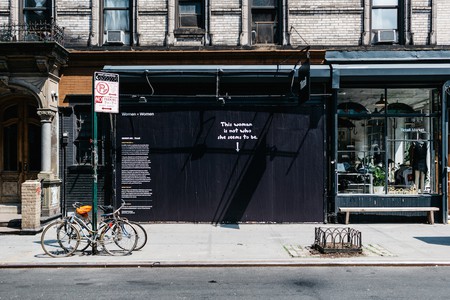 Miranda July, 'This Woman is not Who She Seems to Be' | Courtesy of Women x Women

“We believe the problem isn’t that diversity of thought doesn’t exist in the art world, but rather that it’s rarely given the platform it deserves,” said Nahema Mehta, the CEO and Co-founder of Absolut Art.

Women x Women will remain on view across the Lower East Side until June 1, 2017. To follow along remotely, tag @tictail, @absolut_art, and #womenxwomen on Instagram. To shop Women x Women pieces on Tictail, click here.