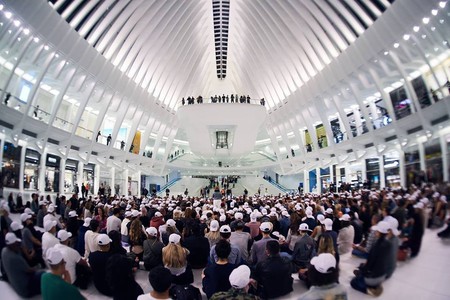 The Big Quiet—a huge congregation of New Yorkers sat cross-legged and silent, side by side—has been popping up in the city’s most famous landmarks since its launch in 2015, and it sells tickets by the thousands.

Meditation has been steadily winning over the masses in the last few years, thanks in part to the wildfire-like spread of yoga. According to recent estimates around 18 million Americans now practice regularly—zoning out with Headspace or reserving a cushion at a meditation studio—and many who haven’t yet jumped on the bandwagon want to. The Big Quiet is bridging that gap by making conscious living feel relevant and accessible to aspiring meditators as well as seasoned ones.

Co-founders and long-time meditators Jesse Israel and Lauren Billie set out to create an experience that embraced what they refer to as “the blend”—the intersection between mainstream culture and mindfulness. A meditation for the masses, practiced en masse.

The inaugural gathering was at Central Park, and had a turn out of approximately 2,000. This was followed by meditations held at the old Domino Sugar Refinery, North Brooklyn Farms, and the Oculus. There was an event on a boat on the Hudson River, which was so popular that hundreds of people had to be turned away—there just wasn’t enough space aboard to seat them all. In March of this year 1,100 New Yorkers ascended to the top three floors of the One World Trade Center and looked silently out over one of the noisiest cities in the world. But the most high profile, so far, was this summer’s event on the Garden floor of Madison Square Garden, organized at the behest of the iconic venue itself. 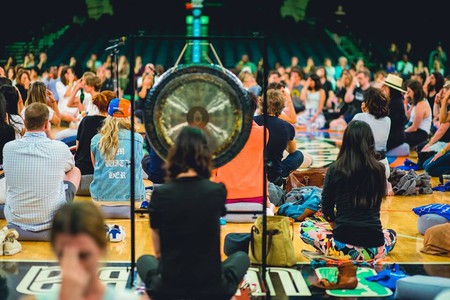 Meditation is generally a solo activity, but The Big Quiet turns it into a social event that groups of friends are willing to go on the waitlist for. For the cost of the ticket attendees get to catch up with friends over healthy snacks and listen to live choirs and musicians before the meditation itself begins—often accompanied by a sound bath. The Big Quiet’s sound director, Sara Auster, plays resonant overtone-emitting instruments like crystal singing bowls, tuning forks and gongs—an effective technique to help meditators go deeper.

“When I’m facilitating sound for large groups—like with The Big Quiet in particular—I’m presented with the unique challenge of a big space and thousands of people. The acoustics of the space and how does it feel to be there in this context,” she explains.”I think about what I do as accompanying people on their own experience. Everyone is a powerful entity that has the ability to tap into whatever they want—into themselves in a deeper way. I’m just creating the conditions for that to happen.” 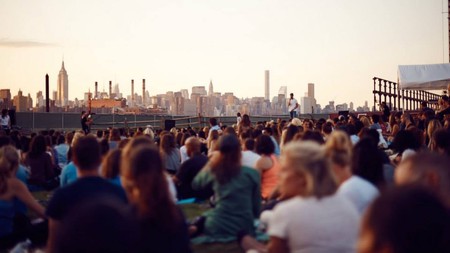 In a city that feels like a pretty lonely place to be at times, there’s something special about coming together with a swarm of other New Yorkers. The Big Quiet has an energy that makes you fall in love with this place all over again.