Theater: This 'Liar' You Can Laugh At 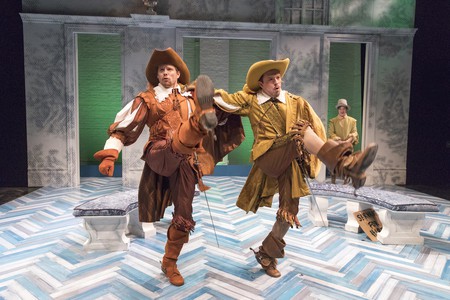 Fancy some escapism via a post-modern 17th-century romp? David Ives’ reworking of Corneille’s The Liar is on the boards at New York’s Classic Stage Company.

One of the funniest plays I’ve seen in New York in recent years was David Ives’ brilliant adaptation of The Heir Apparent, adapted from a little-known comedy by the little-known Jean-Francois Regnard and staged at Classic Stage Company in 2014. Now Ives has “transladapted” The Liar, a little-known comedy showing at the same theater, by the well-known French tragedian Pierre Corneille. In his wonderfully witty version, Ives has the characters speak in verse (iambic pentameter to be exact). He also inserts contemporary slang in the rhymes. It’s an inspired mix, making this reinvigorated 1644 play one of the freshest, breeziest shows in town.

Ives has kept most of Corneille’s plotting, though he’s made some changes. The title character is the dashing but rather dim Dorante (Christian Conn, top right), who has recently arrived in Paris and is looking for a wife. Besides being handsome and overconfident, Dorante is a compulsive liar. He brushes off his father Geronte (Adam LeFevre), for example, by claiming he’s going to brunch with the Queen. He also brags about his military service, another flagrant alternative fact. Dorante hires a valet, Cliton (Carson Elrod), who is his master’s exact opposite: he cannot tell a lie. 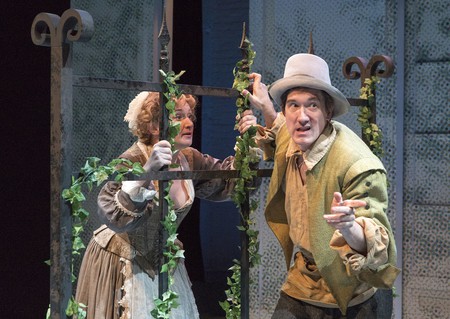 Much of the plot involves mistaken identities. Dorante pursues the lovely Clarice (Ismenia Mendes), but thinks her name is Lucrece. It turns out that Lucrece (Amelia Pedlow) is, in fact, Clarice’s quiet friend. Clarice is supposed to marry Alcippe (Tony Roach, top left), who becomes enraged when he learns that Dorante is pursuing her. Ives adds further confusion by making twins of the maid characters Isabelle and Sabine. Playing both roles, Kelly Hutchinson deftly shifts between the sisters, who look alike but have completely different personalities. Lusty Isabelle throws herself at Cliton, while Sabine is a prude. With typical inventiveness, Ives rhymes “Isabelle” with “twin from hell.”

Conn is quite winning as Dorante, who even teaches Cliton the art of bending the truth. Ives apparently added that scene. (He also wisely put Dorante’s duel with Alcippe on stage instead of keeping it off.) Elrod, a standout in Ives’ All in the Timing as well as The Heir Apparent, once again shows that he’s a master of physical comedy as well as wordplay. Mendes shines as Clarice, and Pedlow makes the shy Lucrece more intriguing than she initially appears. Rounding out the terrific cast is Aubrey Deeker as Alcippe’s perceptive pal Philiste. 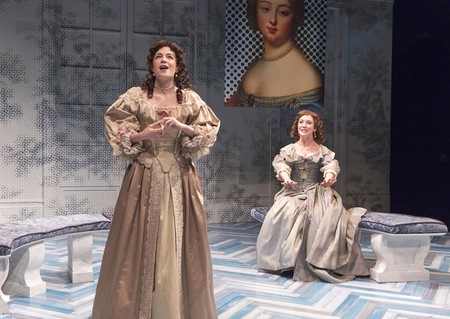 Director Michael Kahn keeps things moving at a brisk clip. As artistic director of Washington DC’s Shakespeare Theatre Company, he also commissioned Ives’ Liar adaptation and directed its premiere in 2010. Among the high points of this production are the attractive period costumes by Murell Horton. Ives’ “Englishing” of the language includes modern lingo (he rhymes “sterno” with “inferno”), but Horton’s costumes help ground the play in the 17th century.

For any ticket buyers who might be disappointed to learn that The Liar isn’t a satire of our current President, Ives does get in a little jab. Near the end, Dorante thinks that his “gifts and disposition” might make him a good politician. Otherwise, this ingeniously updated 17th-century comedy is a delightful escape from depressing 21st-century politics.