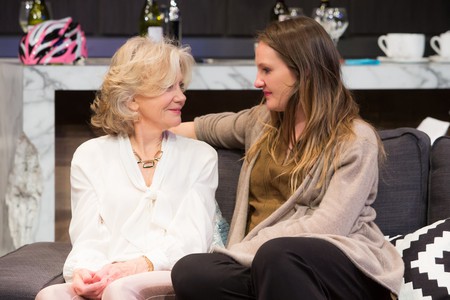 In Isobel Mahon’s play, currently at City Center Stage II, the legendary former child star shines as the anxious mother of a woman newly home from a psychiatric hospital.

The definition of what constitutes a good party differs from person to person. For some, top-shelf liquor makes the night. For others, it’s the company and conversation. The adventurous gauge the night’s success on how late the festivities last. After seeing the chaotic new play Party Face, it’s safe to assume that drunken guided meditation and flying topiary are not on most partygoers’ lists.

Part drawing-room comedy, part family drama, and part theatricalized chick flick, Isobel Mahon’s play, directed by Amanda Bearse, chronicles an eventful night at the home of Mollie Mae (Gina Costigan), who is hosting a party to show off the newly completed extension of her home. 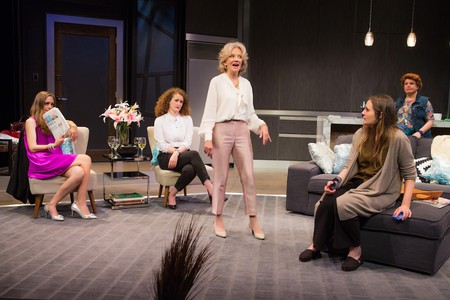 And a lovely extension it is: set designer Jeff Ridenour’s living room is decorated in tastefully subdued shades of blue and grey, and the kitchen boasts a stunning marble countertop. But this peaceful interior soon becomes home to pandemonium when in bustles Mollie’s mother Carmel, followed by both invited and uninvited guests.

Effervescently played by Hayley Mills, Carmel comes bearing expensive hors d’oeuvres and plenty of passive-aggressive energy. Dressed in tight pink capris and a cropped white jacket and adorned with gold jewelry, she is clearly trying too hard. She criticizes her daughter’s decisions and makes unwelcome observations about her marriage. Her one-word dismissal of the bowl of hummus Mollie Mae places in the living room is scene-stopping. Yet Mills’s charm and charisma make Carmel memorable.

Each member of the cast is clearly invested in her character. As Chloe, the vapid neighbor whose sympathy for Mollie is anything but sincere, Allison Jean White is endearingly annoying, having developed her character’s irritating quirks into actual characteristics. 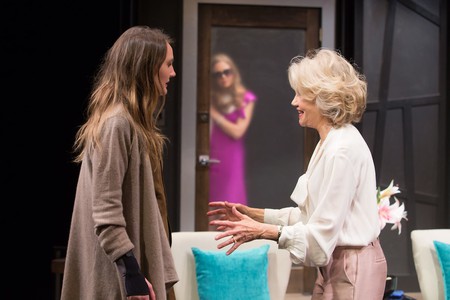 As Mollie Mae, Costigan has the most to work with. Mollie’s party is more than a celebration of her new living room. She has recently been released from a psychiatric hospital. Her husband is not out with a client for the evening, he has moved out of their house—a fact Mollie is reluctant to share with Carmel.

Costigan has a lovely speaking voice and a grounded presence that serves as an effective foil to the fluttering anxiety demonstrated by Mills. Mollie and Carmel clash frequently throughout the night, due in part to the fact that Carmel refuses to admit that Mollie was hospitalized, while Mollie has no qualms about sharing the fact with her guests.

All these elements could combine to create an intriguing play about women’s experiences and what exists beneath the exteriors they work so hard to maintain, but Party Face does not entirely deliver. Despite the good performances, each character functions as a cliché from a classic “woman’s film” or its modern equivalent.

There is the meddling mother; the soon-to-be single woman wearing loose, unflattering clothes; the “other woman” adorned in a clinging dress; the frigid woman enduring an antagonistic divorce; and the butch woman wearing high-waisted jeans and a fanny pack.

As the party progresses and the wine bottles are emptied, the women’s facades shatter. Tensions erupt, causing actual fights—the anatomically correct topiary is one of the victims—and secret family traumas are exposed after intoxicated group breathing exercises. Yet the play never attains the level of emotional gravity that these moments deserve. 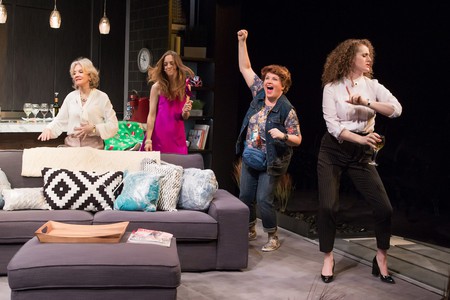 Instead, easy and sometimes cheap laughs are earned by crude humor, including commentary on Mollie and Bernie’s fellow patients at the hospital. Hearing the experiences of people suffering from obsessive-compulsive disorder described as fodder for comedy did not amuse this critic.

The play is warmly funny in places, usually when Mills is center stage. The one-time beloved child star of Pollyanna (1960), The Parent Trap (1961), and Whistle Down the Wind (1961) has matured gracefully into an accomplished 71-year-old stage actress without losing much of her winsomeness. 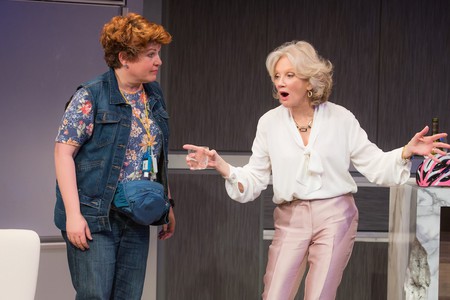 She delivers every joke with a light touch, never over-playing a scene, even when leading a conga line across the stage. The sincerity of Carmel’s good intentions comes through her narcissistic efforts to maintain a perfect shiny exterior. Carmel even boasts of her Botox, and poses so everyone can admire her face.

Briskly paced, Party Face packs many events into its under-two-hour running time, but its conclusion feels too neat and tidy to resolve all of the problems that surface at Molly’s soirée. Emotions quickly shift—from angry to amused, for example—and long-standing grudges evaporate in an instant. While pleasant, it’s unrealistic. There’s no doubt that Carmel would approve.