The Weird and Wonderful Body Sculpted Over 700 Years 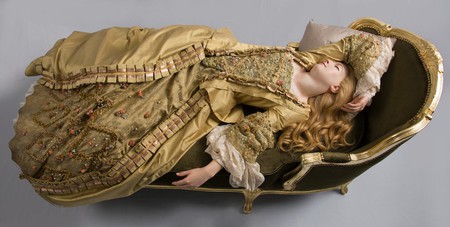 The Met Breuer has entered unchartered territory with Like Life: Sculpture, Color, and the Body (1300-Now). A pioneering survey of figurative sculpture, Like Life delves not only into the historical context of some 120 artworks, but into the depths of sculptural practice itself; and in questioning the boundaries of human simulation asks, can art go too far in mimicking reality?

Step right up—you are cordially invited to gawk, gaze and recoil at a wealth of bodies, both alluring and grotesque. An inquisition into the complexities of honoring the human form, Like Life investigates the complicated nature of verisimilitude. Through the thematic juxtaposition of historical, modern, and contemporary figurative works, Like Life examines the evolution of sculpture (and therefore the body, in all its grace, glory, and gore, by proxy) over seven centuries. Visitors be warned: this one is equal parts magnificent and disturbing to behold. 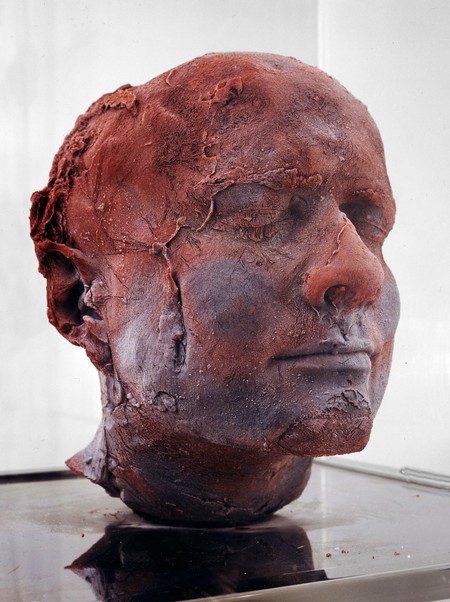 This highly ambitious undertaking serves to not only showcase art history’s myriad approaches to representing the body, but to highlight the gendered and racial exclusivities of sculptural practice through the centuries; to confront historically controversial inaccuracies perpetuated by encyclopedic museums (like The Met); and to address the profoundly disturbing experience of an artwork that is simply too lifelike.

Curated by Sheena Wagstaff and Luke Syson, Like Life builds out eight thematic sections from its first constituent, “The Presumption of White.” Here, Wagstaff and Syson underscore the misinformed trajectory of sculpture after the Renaissance, when European artists—with a blind devotion to the antiquity—erroneously rejected polychromatic sculpture.

Unbeknownst to them, classical sculptures were painted before the millennia stripped them bare, and American and European sculpture halls subsequently carried forth this false presumption. White—denoting both skin tone and the absence of color—was a symbol of purity and a standard of beauty in the Western canon. And while neo-classical sculptures may have rendered the body artful and divine, in this way, they did not encapsulate reality with precision.

Then again, art that creeps so closely towards reality as to seemingly embody a presence doesn’t sit too well either. The exhibition’s highlights are arguably its most jarring features—among them, a 19th century auto-icon of the British philosopher Jeremy Bentham containing the man’s actual skeleton; a cast of British artist Marc Quin’s head frozen in his own blood; Nancy Grossman’s tremendous, menacing, leather-bound man; and Goshka Macuga’s seated android, who rattles off a lengthy philosophical speech to test the limitations of the uncanny valley.

Another section, “Desire for Life,” explores the potential and pitfalls of “extreme” naturalism. In the Middle Ages, for example, Christian sculptures forged to “elicit empathy and faith” risked the wrongful worship of idols over ideals. Yet, the pursuit of realism has expanded the boundaries of this ancient art form to incorporate—or perhaps to amalgamate—instinctual emotions like lust and love with technology and biology.

“Figuring Flesh” presents grisly anatomical models alongside medieval representations of Christ, bruised with torn flesh and open wounds. As the “Desire for Life” label references Pygmalion—Ovid’s ancient Greek poem about a sculptor who worshipped his own statue to life—”Figuring Flesh” notes the not so subtle sexualization of morbid sculptures like the 18th century Anatomical Venus, in which a waxy maiden, butterflied with her guts hanging out, is still somehow “passive and penetrable.” 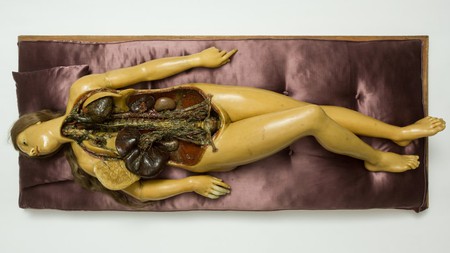 It’s not all quite so shocking, though. Some sculptures communicate with splendid harmony, their organs snugly intact. A standout pairing is Edgar Degas’ 19th century The Little Fourteen-Year-Old Dancer, a poised ballerina rendered in bronze, showcased in close proximity to Yinka Shonibare’s contemporary Girl Ballerina who, despite being headless, is depicted with rivaling grace. Donning a dress made of Shonibare’s signature West African batik prints, her power and defiance are reinforced by the pistol she conceals behind her back.

So what exactly is Like Life? It’s a morgue, a menagerie, and (perhaps?) a mea culpa on behalf of historically-flawed museums everywhere, but this is one curious showcase you don’t want to miss.