The Triumphant Return of Arcades to NYC 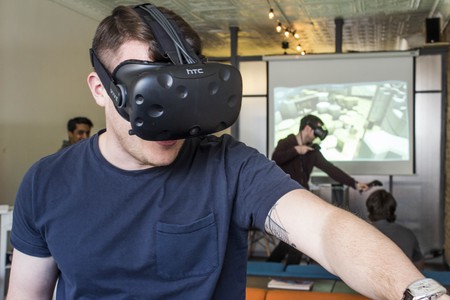 In 1982, the video arcade industry in the U.S. made $8 billion from quarters pumped into machines playing addictive and entertaining games. That was more than pop music, which made $4 billion in sales per year, and Hollywood movies, which made $3 billion, combined, according to a 1984 book Silicon Valley Fever: Growth of High-Technology Culture by Everett M. Rogers and Judith K. Larsen.

But as console prices fell and systems became more sophisticated, the video gaming world moved into the household, until it eventually became more mobile through Gameboys and, later, smartphones.

Two trends have contributed to bringing gaming back out into public spaces, and one is simple nostalgia. People are drawn to the video games of their childhood, just as they are with movies and music. Some bars have capitalized on this desire by offering up the perfect combination of arcade games and beer.

Barcade, which labels itself the original arcade bar, opened in Williamsburg, Brooklyn in 2004, and has grown alongside the neighborhood and its general trend towards hipster and nostalgic culture. Barcade, which hosts old-school arcade games and serves craft beer, opened up two new venues in Manhattan in 2014. The chain also has bars in Jersey City, Philadelphia, and Connecticut. Many more copycat bars have opened up in New York and further afield, capitalizing on the emergence of older, geeky elements of culture becoming cool.

The other trend is a technology reborn: virtual reality. The re-emergence of VR, more impressive than its first iteration in the 80s, has brought new possibilities to gaming, but also costly equipment. Just as in the 70s, this has resulted in arcades popping up around New York and other cities, which give gamers the chance to play the games without having to make a huge investment.

It’s no surprise that one of the best VR arcades in New York has its roots in Brooklyn. It may not sell alcohol yet, but vrbar is still a great time with friends. The venue has two VR setups, and charges $14 for 15 minutes in virtual reality. All the finest titles are available, from shooter SUPERHOT VR, to the more artistic Tilt Brush. Vrbar also caters for birthday parties and work events, and can hook two people up to the same VR game, making for some ridiculously fun gaming.

Kishore Doddi, the owner and founder of vrbar, said he was initially disappointed with early version of the Oculus VR headset, but soon changed his view of the technology. “I’m usually a little bit of a realist with technology, and I didn’t think that the Oculus would be that impressive for the general public, but then I saw Tilt Brush for the Vive and I was blown away.”

He says that a lot of his customers are keen to try out VR for the first time and once they do, the arcade has a “great retention rate”. He also says that some of the reactions to trying VR for the first time can be interesting. “The skeptics always have the best reactions,” says Doddi. “They even come here with their friends and don’t plan to do it, but either their friend or I get them to do it and they’re blown away. To any skeptic I’d say you just have to try it.”

Arcades aren’t just appearing in commercial forms, technology giants are also hosting virtual reality experiences as a way of introducing the concept to the masses.

To understand the appeal of virtual reality you really have to experience it. And although headset prices are falling, many people have been understandably hesitant to jump straight in and buy the hardware necessary to enjoy virtual worlds.

Samsung’s 837 building is the ideal place for VR beginners to start their journey. If you’re picturing an electronics store with a VR demo in the corner, think bigger. In a three-floor space, you can take a ride on a luge, enjoy the thrills of a roller coaster, experience a hovercraft ride down a river, and even throw buildings at giant robots.

Zach Overton, GM of Samsung 837, says the primary goal of the space is to introduce virtual reality to people who haven’t experienced it before. “Then we’re building on top of that and say how do we create even more immersive experiences through virtual reality?”

Those interactive experiences are great fun, and best described as 4D. The rollercoaster experience, for example, sees visitors sit in a roller coaster seat and put a headset on. Not only are they experiencing the ride in 3D through the headset, the seat itself is moving to further heighten the sense of riding the coaster.

“The farthest we’ve pushed it is a program called Believe Your Eyes with the theatrical company Punch Drunk which was part live action theater and VR. It blurred the lines between virtual and reality so much so that people would come out of the experience sweating and screaming,” Overton says.

“We feel that VR is the new frontier of immersive storytelling so we’re constantly trying to change up what that experience is. VR isn’t just an entertainment and gaming platform.”

Jump Into the Light on the Lower East Side of Manhattan offers a similar experience to vrbar. The space has several Vive and Oculus setups, and caters for other events like music video launches. VR World in midtown, more recently opened, goes a step further, offering around 50 stations over three floors and a range of experiences for people to try out VR. You can either buy a two hour pass starting at $25 per person, or pay a little extra and spend the whole day there with unlimited access to the virtual worlds on offer. 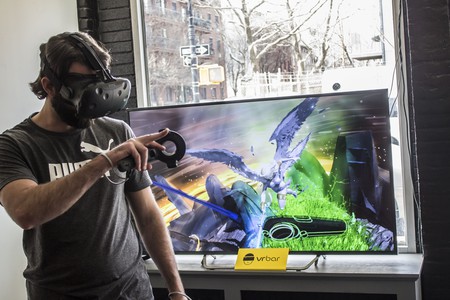 There are more VR experiences across the city, from the Microsoft store to the Ghostbusters experience at Madame Tussauds, and it’s likely further attractions will be added in the next few years. But will the technology remain in arcades, or will these public gaming spaces retreat back into the home again?

Unfortunately for arcade fans, it seems the technology is already reaching a point where a public space may be unnecessary. The next Oculus headset, the Go, will be a standalone system, meaning it doesn’t need a computer or console to make it work, and it will cost just $199. Making the technology cheaper and easier to use is precisely what put games consoles into the home and out of the arcades, and it’s hard to see history not repeating itself. Maybe the real measure of virtual reality’s success will be the existence of retro VR arcades 30 years from now.