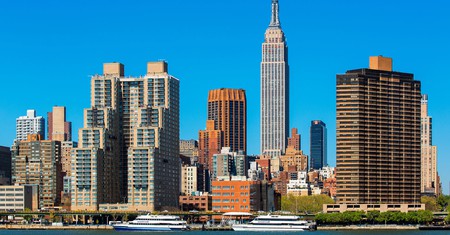 There’s nowhere quite like New York. Immortalized in more films, TV shows and songs than we can count, the city’s long waterfront and impressive skyline make it instantly recognizable. These five iconic skyscrapers are among the best known, each bringing something unique to the city. 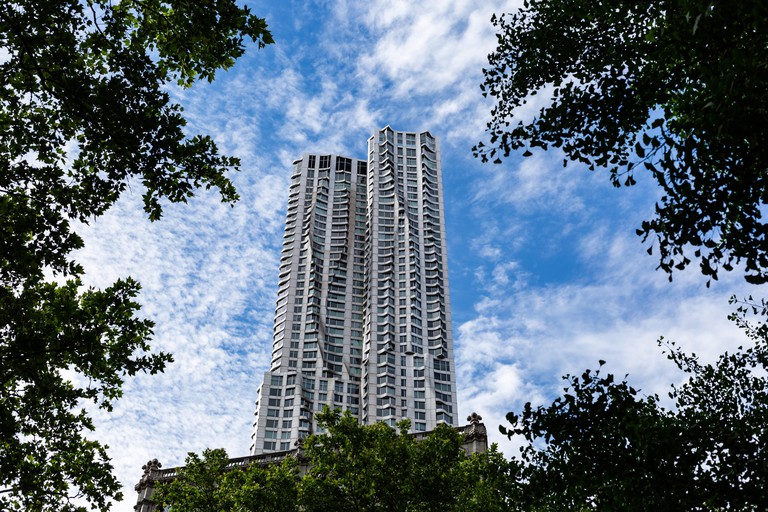 Gehry's unique style is on view at New York by Gehry in Lower Manhattan, New York City. | © Edi Chen / Alamy Stock Photo
The skyscraper on 8 Spruce Street was architect Frank Gehry‘s first commissioned residential building in New York, his first skyscraper, and, for a while after it opened in 2011, the tallest residential building in the Western Hemisphere at 76 stories and 870 feet. The architect is famous for his sculptural, spectacular designs that often play with shapes, and though New York by Gehry isn’t one of his flashiest designs, the skyscraper in the Financial District with its undulating facade is pure Gehry. It’s a re-imagining of the classic Manhattan high-rise, and shows that it’s possible to update the traditional skyscraper without losing its soul.
Open In Google Maps
8 Spruce Street, Manhattan New York, New York, 10038, USA
+12128772220
Visit Website
Give us feedback

Book Now
The most iconic skyscrapers in New York are probably, sadly, the ones no longer there – the Twin Towers that fell during the September 11 attacks in 2001. In their place the One World Trade Center, also known as the Freedom Tower, now stands. The tallest building in the United States, it was built after the tragedy as a symbol of resilience. When it opened in 2014, it overtook the Empire State Building as the city’s highest skyscraper, a role Empire State had held since the attacks. The 69-story building reflects the light during the day, and at night a light beam is sent out from a beacon at the top, which also has an observation platform. It’s perhaps not the most architecturally interesting skyscraper in New York, but it’s a poignant symbol of the city.
Open In Google Maps
One World Trade Center, 285 Fulton Street, Manhattan New York, New York, 10006, USA
Visit Website
Give us feedback

The Chrysler Building is a skyscraper that everyone recognizes, and it’s probably one of the first that springs to mind when you picture quintessential New York buildings. The reason? Its beautiful Art Deco design, which harks back to 1928 when it was built for car brand Chrysler to use as its headquarters. Walter Chrysler wanted to build the highest building to date, and succeeded – for 11 months, until the Empire State Building overtook it. The beautiful, Jazz-Age lobby and exterior ornamentations based on features from Chrysler’s cars have aged well, and today it is one of New York’s most-loved skyscrapers.
Open In Google Maps
405 Lexington Avenue, Manhattan New York, New York, 10174, USA
+12126823070
Visit Website
Give us feedback

Book Now
In the late 19th century, New York got the nickname “The Empire State.” It’s not known where it came from (though some attribute it to George Washington), but it’s stuck – just look at any New York state license plate. And the eponymous 5th Avenue skyscraper is, without a doubt, the most symbolic New York building there is. Opened in 1931, the Empire State Building is another Art Deco treasure in the New York skyline, but it’s more streamlined and less ornate than the Chrysler Building. The tower is a steel frame covered in limestone and granite, and was named “one of the seven greatest engineering achievements in America’s history” in 1955. It’s also played a part in numerous films – it’s the Empire State Building that King Kong climbed in the 1933 film of the same name, and the skyscraper is also where, sixty years later, Meg Ryan and Tom Hanks decide to meet up in Sleepless in Seattle (1993). Check out our list of the best films set in New York.
Open In Google Maps
20 West 34th Street, Manhattan New York, New York, 10001, USA
+12127363100
Visit Website
Give us feedback 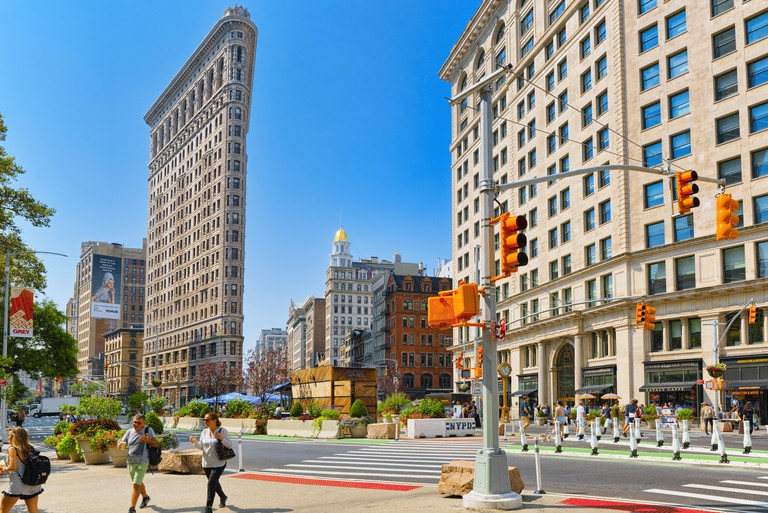 The Flatiron Building on 5th Avenue is so iconic that it has a neighborhood named after it. | © Brian Kinney / Alamy Stock Photo
The Flatiron Building isn’t one of New York’s tallest skyscrapers, but it’s definitely one of the most beautiful, as well as one of the oldest: it was built in 1902. One of the most recognizable buildings in New York, it was designed by Daniel Burnham, who’d created a number of seminal Chicago high-rises before the Flatiron and later designed Selfridges department store in London. The slim, triangular shape makes the 22-story skyscraper really stand out, and it’s so familiar that the entire district around it is known as the Flatiron District. The structure measures just six and a half feet across the narrow end, and Burnham designed the facade to look like a Greek column, giving the skyscraper its unique look. It is now a designated historical landmark.
Open In Google Maps
175 5th Avenue, Manhattan New York, New York, 10010, USA
Give us feedback
Give us feedback