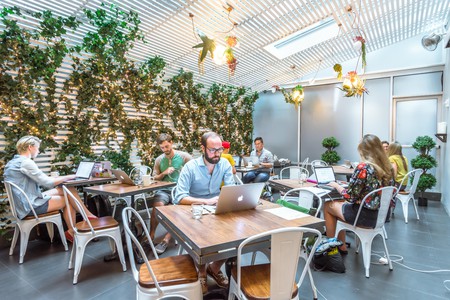 Kettlespace at the Mykonos Blue Grill in New York | © Kettlespace

We’ve all been in the situation where we need to work out of the office and dive into the nearest coffee shop to find desk space and WiFi. But the sticky tables, the slow internet, and noisy atmosphere isn’t exactly a productive work environment. A New York city startup is aiming to fix that issue, by making the city’s restaurants your next workplace.

Prior to co-founding KettleSpace, Dan Rosenzweig had a very New York moment. He was trying to take an important call on a rainy afternoon in Chelsea, and ducked into the nearest Starbucks. But when he entered the coffee shop he found there to be no seating, and noise levels that weren’t exactly helpful for an important meeting on the phone. So instead, Rosenzweig went to a restaurant and asked the owner if he could take the call and do some work there, and was told that was fine providing he ordered something from the menu. From this experience, the idea behind KettleSpace was formed.

The company’s service works fairly simply. You sign up on the site, pay a monthly fee which can be as low as $25 per month, and then choose the restaurant you want to work at. When you arrive you are given coffee and snacks, fast WiFi access, and access to essentials like outlets for laptop charging.

KettleSpace has three founders, each from unique backgrounds. Rosenzweig is a former WeWork employee who has expertise in real estate. Andrew Levy is a former Twitter employee who has spent his fair share of time working in cafes and has advised multiple startups. And Nick Iovacchini is also the co-founder of New York gastropub Distilled. 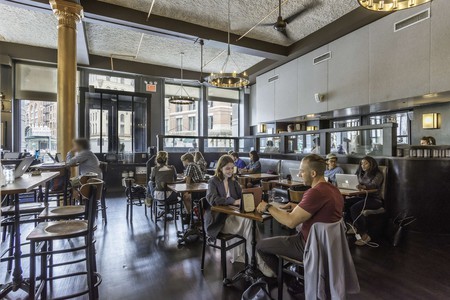 Each founder brings knowledge of a different part of the KettleSpace process; the consumer looking for a place to work, the restaurant looking to entice more business during workdays, and the co-working dynamic that brings them both together.

According to Levy, KettleSpace has positioned itself to accommodate those not willing to pay for an expensive coworking office and unhappy at working at home or at a coffee shop.

“Between coffee shops and coworking there’s a huge white space. Within the next decade half of the U.S. workforce will be remote or freelancing. Right now you can work from home or from local coffee shop. We saw an opportunity to provide something that hasn’t existed before,” says Levy. 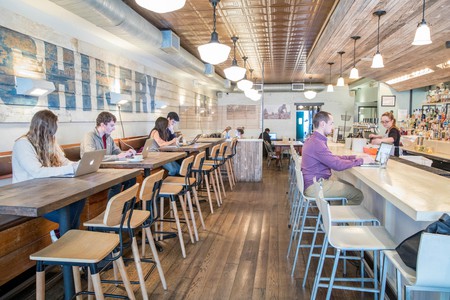 KettleSpace at The Cannibal Liquor House in New York | © KettleSpace

This unique offering is seen in the diversity of offerings for users. “In contrast to WeWork and Starbucks, every space has its own personality. We only partner with certain aesthetic levels,” Levy says. “So people choose a space that resonates with the way they’re feeling. At the same time no matter where they are, they will know that the essentials they need to be productive, fast wifi, access to outlets, comfortable seatings, coffee and snacks, a collaborative community are there for them no matter what.”

The company currently has six locations across New York, and is planning to expand rapidly in the future, and possibly to another U.S. city before the end of the year. New York has been a perfect city to start in, according to Levy, mostly because of how expensive it is. To rent any space in New York can be a crippling expense for any freelancer or new business owner, and the high costs also affect the uber-competitive restaurant industry. Pressures to find new income sources for restaurants have made them more open to the idea of hosting workers.

As more and more young people choose to be freelancers and entrepreneurs over steady jobs, the need for creative co-working space solutions will only increase in the future. For anyone who’s tried to get a day’s work done on a sticky Starbucks table, working out of a top New York restaurant could be the ideal solution.