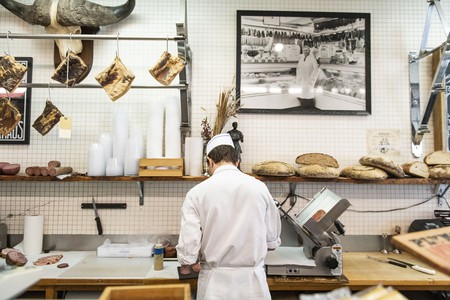 Despite the constant challenges facing New York City’s independent businesses, three family-run food joints – the Lexington Candy Shop, Schaller & Weber and Mazzola Bakery – have all managed to stay in operation for close to 100 years. Culture Trip speaks with the owners to find out how.

In a city with franchises on every street corner, and far too much generic coffee sealed beneath plastic lids, it can be difficult for independent food places to keep their doors open. But Lexington Candy Shop, Schaller & Weber and Mazzola Bakery have managed it. Each store has been around for more than 80 years, and all are still thriving today as living pieces of New York’s culinary history. So what is the secret to longevity in this notoriously transient city? 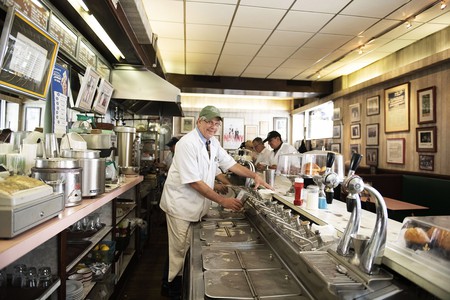 John Philis floats through Lexington Candy Shop dressed in a charmingly sullied white apron. He can often be found clutching a silver milkshake cup, streaks of vanilla ice cream sailing over the rim, or chatting to diners perched on stools at the counter. He zooms throughout the space just like his servers, shepherding crisped-up tuna melts, flanked by a tangle of crinkle-cut French fries, to ladies nestled in teal-colored booths. He is as integral to Lexington Candy Shop as its antiquated coffee machine, its black-and-white advertisements framed on the walls and its old-fashioned neon sign strung outside.

Philis is the third-generation owner of one of New York City’s last remaining luncheonettes. The storied diner opened in 1925 – long before the Q train crept up the Upper East Side’s 2nd Avenue. For almost 100 years, it has remained a family-run operation. 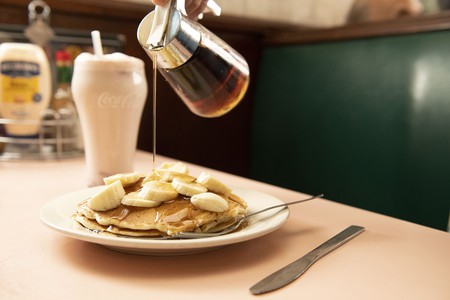 Philis’s grandfather started the business as a humble soda fountain and candy shop (hence the name). Candy was crafted in the basement, and ice cream, sandwiches and coffee were served upstairs. However, during the warmer months, candy sales decreased, so Philis’s father and grandfather expanded the menu to encompass an array of hot food.

“The way the store is today is the way it has been since 1948,” Philis says. “We update things, but the format, the layout of the store, is the same as it was back then. We’re the last ones left like this.” 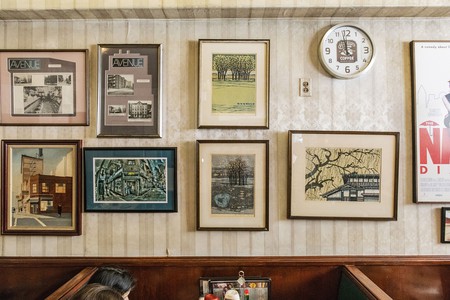 A long counter runs through the middle of the diner, peppered with swiveling stools. Behind it, a mint-green Hamilton Beach machine constantly whirrs, blitzing scoops of Bassett’s ice cream into silky milkshakes. Chefs are batted back and forth between stations, flipping pancakes and spritzing egg creams with chocolate syrup. Diners watch, nursing mugs of steaming coffee and babbling with the friendly staff.

“We’re the type of place where kids come after school and they run a tab. People leave packages to be picked up by others. I’ve got keys to apartments,” Philis says. “You can’t do this at a Starbucks; you can’t do this at the local bagel store. It’s just something that’s nice that’s missing – that old-school small-town USA, right in the middle of New York City.” 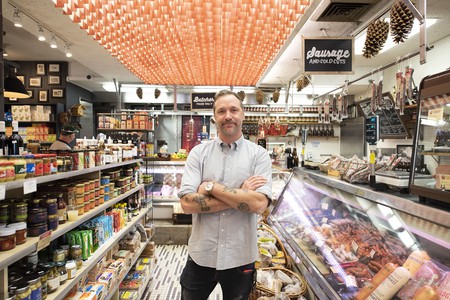 Jeremy Schaller is nostalgic for the disappearing German culture in his Manhattan neighborhood, Yorkville. He’s the fourth-generation owner of Schaller & Weber, a German market and butcher shop on the Upper East Side that’s remained in the same space since 1937.

“This whole street was called Little Germany,” Schaller says of 86th Street. “You could actually speak German up and down this street. Upholding that tradition is really important to me, not only because I want to see this company survive beyond 100 years, but this is the last thing of old Yorkville that exists.”

Schaller’s grandfather moved to the US from Germany, bringing with him an extensive knowledge of butchery. He opened Schaller & Weber as a community-driven shop, slinging sausages and a variety of meats for the heavily German-populated neighborhood. Since Schaller took over a couple of years ago, he’s modernized the shop and spearheaded a number of changes in an effort to appeal to the Yorkville’s ever-changing inhabitants, but still maintain tradition. 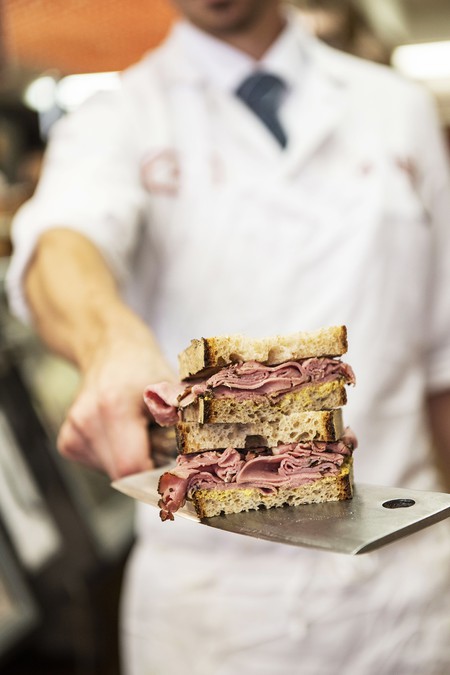 “It became a little more than just a butcher shop. It’s turned into a destination for people of German, Austrian and Swiss [descent], and a lot of Nordic countries,” he says. “These stores exist all over Europe. It doesn’t exist very much – especially in New York – anymore. Now we’re bringing that experience here.”

The shop, just south of 86th Street on 2nd Avenue, is split into a couple of sections. White-coat-clad butchers mill behind the long L-shaped glass case, delicately slicing sheets of turkey and pilling mountains of potato salad and stuffed cabbage into takeout boxes. Crinkly sausages, wrapped in plastic, dangle from the ceiling, twisted in white string. The cases are lined with steak and chicken, kielbasa, bratwurst, chorizo, local sliced breads, paté and cheeses. Butchers craft sandwiches upon request, jamming hunks of spice-tinged pastrami into plush rolls slick with mustard.

The rest of the shop is geared toward dried goods. Shelves are stocked with tins of anchovies, yellow mustards, chocolate bars, and jams stained in every color of the rainbow. A towering fridge in the back overflows with bottled beers and ciders. As you wander through the aisles, early 20th-century swing music bellows from the speakers. 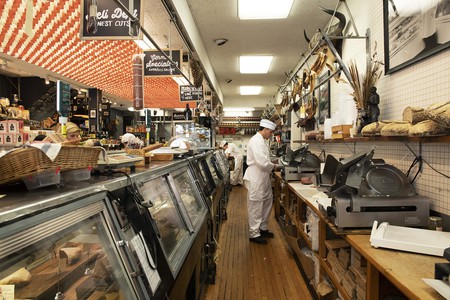 “I don’t think the Germans initially held onto their heritage as much as the Italians or French did,” Schaller says. “Maybe there was a sense of embarrassment [about World War II, and a need] to separate themselves. But now young people want to experience that culture. When Germans and Austrians move here, they really miss being able to find those speciality items.”

Although Schaller has updated the store over the years to keep up with modern times, he’s steadfast about maintaining those family and cultural traditions, both for the regulars who shop at Schaller & Weber, as well as for his father and grandfather.

“These things are working, and I know that unless something drastic happens, this will make it to 100 years,” he says. “My grandfather’s not around, but making him proud about that – that brings me to work every day.” 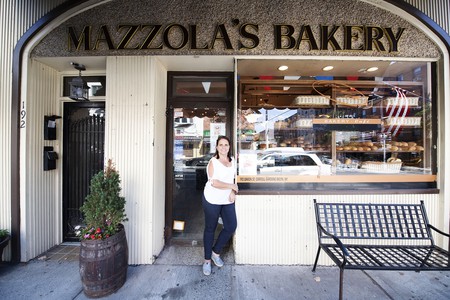 Perched on a sleepy corner of Carroll Gardens in Brooklyn is a teeny Italian bakery. It’s an unassuming storefront – the outside reads simple and old-fashioned – but peer through the windows to examine bread-filled baskets balanced on shelves, curly croissants and sprinkle-flecked cookies. Push open the door and you’ll be greeted with a wonderfully potent gust of flour and yeast spiraling out of the kitchen. Children dash around the small shop, their hands clenched around Italian cookies. Regulars waltz in for a paper cup brimming with dark coffee and head out clasping a loaf of golden-brown bread.

This is Mazzola Bakery. Founded in 1928 by Italian immigrant Nicolo Mazzola, the bakery solely served traditional, rustic Italian bread and a couple of cookies. Mazzola’s children took over, expanding both the store and the menu, but they retired in 1980. No one in the Mazzola family wanted to take over the business, so the father of Josephine Caravello – the current owner – purchased the bakery, updating the offerings and modernizing the digs to keep up with the neighborhood’s perpetual changes. 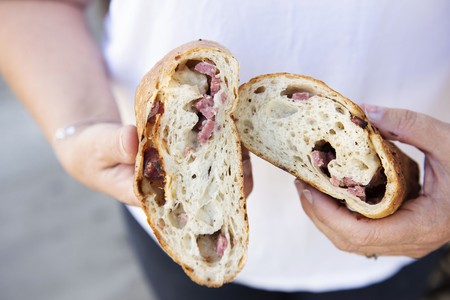 Josephine Caravello spent much of her childhood in the bakery, acting as a sales girl and taking on other roles from a young age. “It’s a hard business, but it’s rewarding, especially since it’s been here so long,” she says. “But I grew up here.”

Along with butter cookies, plump muffins and array of crackly breads, Mazzola Bakery is best known for its lard bread. This bread recipe comes from Palermo in Sicily – where the original Mazzola was born – and was historically baked by poor Italians as a way to save food from being wasted. “Whatever meat they had leftover, they used to mix with the bread and make a meal out of it,” Caravello explains. 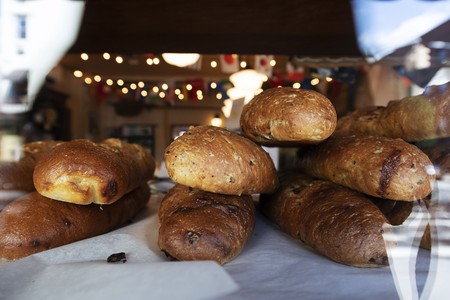 In Mazzola’s version, crusty wands of bread are streaked with bits of salami, provolone cheese, lard and black pepper. Since opening, the recipe has never changed. It has remained the bakery’s best-selling item.

Despite not being part of the original Mazzola family, Caravello still feels an innate, intimate connection to the bakery, fueled by the fact that she gets to work with her loved ones every day.