Every night in New York, a handful of civilians around the city dress themselves in costumes and take to the streets to fight crime. These real-life vigilantes include “superheroes,” militia-style organizations, and even religious protection groups. They’re the latest iteration of a long-held American fascination with vigilante justice.

For the past 15 years, a shadowy figure has patrolled the streets of New York. He wears a red armored vest with superhero initials blazoned across the front, padded gloves, and a large flashlight on a utility belt. Armed only with his martial arts skills, he prowls the city at night looking for crime and disorder.

Like most superheroes, 32-year-old Staten Island native Chris Pollak takes on a separate identity: Dark Guardian. He takes his nighttime activities very seriously. “I’ve taken on drug gangs before. I clean up the areas they’re in, at least for a while,” he tells me. He’s also dealt with pimps in Harlem, who have threatened to kill him for disrupting their business. Recently, he confronted a man “out of his mind on drugs” who had run into a store and began smashing it up. Pollak subdued the man, who was apparently wielding a broken bottle, just long enough for the police to arrive and arrest him.

Pollak’s vigilantism is just one expression of a weird and sometimes dangerous fascination seen throughout American history. The country’s past is littered with myths and legends about enforcers of justice who protect their own regardless of politics or the rule of law. Far removed from the capes, masks, and anonymous bravado, vigilantism often involves a darker reality centered around race and bigotry.

While the practice has been used as a tool for bigotry and insular thinking, it also materializes as a reaction to institutional racism. “What you have seen historically is that in communities which were under-policed, often because of racist and discriminatory reasons, private citizens would take it upon themselves to protect themselves because they knew the police would not,” says Matt C. Pinsker, adjunct professor of homeland security and criminal justice at Virginia Commonwealth University.

“We used to see this in the Irish, Asian, and Jewish neighborhoods in New York; gay communities in San Francisco (‘Lavender Panthers’); and African-American neighborhoods in the South in the time of Jim Crow,” Pinkser adds. “Just like good soldiers and police officers, these private citizens felt a call to protect their communities, and would take on the role that law enforcement was failing to provide. Sometimes, instead of the policing being done by concerned citizens, this role was taken over by organized crime syndicates, such as the Mafia in Italian neighborhoods, but require the people who lived there to pay for the protection.”

The vigilante ideal has permeated America’s culture in all forms. Comic books from the 1930s onwards featured superheroes and masked characters operating outside the law, while movies such as Death Wish (1974) and Taxi Driver (1976) explored the morality and psyche of vigilante justice to varying extents. More recently, Kick-Ass (2010) lampooned the superhero culture, questioning what would happen if normal people were to don costumes and fight crime, while the likes of Pollak and others were already suited up and battling villains on Manhattan’s streets in the real world.

In their red berets and jackets, the Guardian Angels cut a striking and familiar figure in New York City. The group was formed in 1979 as a reaction to violence on the New York City Subway. The vigilante organization was created by Curtis Sliwa and was originally opposed by the then-Mayor of New York City, Ed Koch, but over time won the recognition and trust of not just Koch but future mayors, as it expanded from patrolling the subways to educating the public on safety as well. Members of the organization were trained to make citizen arrests for violent crimes, but mainly acted as a deterrent by being a conspicuous presence on the trains. 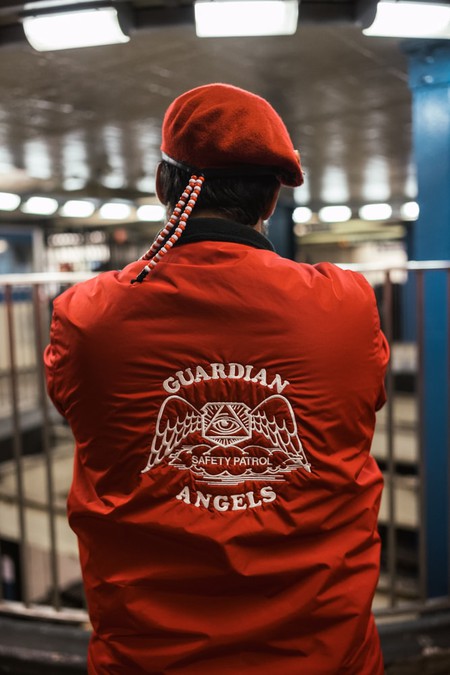 Not long after the group’s formation, the lines between genuine vigilantism and superhero fiction were blurred. Sliwa has since admitted the group faked some subway rescues in the 1980s in an effort to gain publicity. Guardian Angels can still be seen on the subway system in New York, but they protect a much cleaner city than when they were formed. Back when the group was in its prime, Times Square at night was unrecognizable from today’s altar of capitalism. Prostitutes, pimps, and drug dealers stood on the corners, while sex shops and peep shows lined the streets where family restaurants now stand. As a result, groups like the Guardian Angels, and other less savory examples of vigilantism, emerged.

In 1984, Bernhard Goetz, who was carrying a concealed weapon, shot four alleged muggers on a subway car. Goetz was charged with a number of crimes, including attempted murder, but was found innocent of all except carrying an unlicensed firearm. Following the trial, Goetz was embraced as a cult hero by some in the city, and he used his new-found celebrity status to push for all civilians in New York to arm themselves. He appeared in films later on and even made a run for the mayor’s office. In 1996, one of the victims, who suffered brain damage as a result of the incident, obtained a civil judgement worth $43 million against Goetz. The whole incident was a very real example of the potential consequences of vigilantes in a city like New York, and brought gun ownership, racial tensions, and citizen justice into sharp focus.

As with many of America’s past times, vigilantism in New York has taken on a more technological form recently. An app called Vigilante was launched in 2016 and was banned from the app store a day after its release. Vigilante reported the locations of crimes in almost real time and encouraged people to work together to address crime-ridden neighborhoods. Unsurprisingly, there were fears the app could instigate vigilante behavior and racial profiling in areas with high crime. The app was rebranded and relaunched as Citizen at the end of 2017, and still highlights dangerous areas of New York City. It has yet to receive the backing of the New York Police Department and remains a controversial concept, as it monitors police and fire scanners before sending out alerts to its users. Those in the area can then either avoid the incident, or approach it and live stream whatever is going on through the app. The app makes it easier for vigilantes to operate, as do social media networks like Twitter, where would-be superheroes can follow accounts monitoring police scanners and make an appearance at a crime before or at the same time as the authorities.

It may be true that the app was designed with the likes of Pollak, or Dark Guardian, in mind. His version of vigilantism comes purely from a place of good intention, but it isn’t without risk. He doesn’t carry a gun and has never in his time protecting the streets had to become violent toward anyone. He has been threatened on several occasions and the police have been involved.

“My relationship with the police is OK,” he says. “I’ve never done anything illegal. They’ve picked me up before when I’ve gone up against bad drug gangs, but they’ve just been helping me out. They’ve been good about it.”

Fighting crime has, however, affected Pollak’s personal life. “I was working at this place, and I was going up against some gangs, and unfortunately that got me fired from my job. They said it was dangerous,” he says. Pollak has since set up a crowdfunding effort to try to raise the money he needs to continue being a superhero while he’s out of work.

Dark Guardian is by no means the only real-life superhero in New York, or the rest of America for that matter. He regularly teams up with other costumed crime fighters, and a national network has grown. One of the largest groups is San Diego’s Xtreme Justice League, which has affiliated chapters across the country. Dark Guardian is part of his own group, the New York Ronin, and patrols occasionally with other superheroes, including “Life”—real name Chaim Lazaros—based in Brooklyn. But Life is a different kind of superhero to Dark Guardian.

“I’ve been doing my own mission, which is more of a social one, rather than vigilantism,” he says in an interview. “I have gone out with guys who have done the crime fighting, but I focus on homeless outreach.”

Usually dressed in black and white with a black mask, Lazaros rides his bike to places where he knows there will be homeless people and hands out what he calls “Life Packs,” which are the essentials needed for those living on the street. “I talk to them and listen to them, give them a Life Pack and then go on my way,” he says.

So if he’s not battling bad guys, why wear the mask? Lazaros has both practical and motivational reasons. “The persona and symbol of the superhero is so powerful that it transcends language and cultures,” he explains. “Many of the homeless people I work with are from immigrant populations and are fearful of authority figures. They ask where I’m from and I put on my mask and say I’m a superhero, and they understand I’m going to do something good for them and not try to take anything in return.”

Lazaros first adopted the Life persona 10 years ago and was inspired by his family. “My father is a rabbi and my mother is a nurse,” he says. “Both dress up in uniforms that represent higher ideals and help people every day. Being a real-life superhero was a way for me to follow them that was unique, strong, and powerful.”

Vigilantism in America has a sordid past and some of its ugly sides are still evident today. It’s easy to forget amid the glamor and excitement in cultural portrayals that vigilantism is an illegal and dangerous act. But the real-life superheroes of New York have a genuine desire to help make their cities and communities safer. They may be mocked, dismissed, and threatened, but regardless of the appearance, their motives and intentions are true.

“We’re all capable of being heroes,” Dark Guardian says. “You don’t need to wear a costume.”