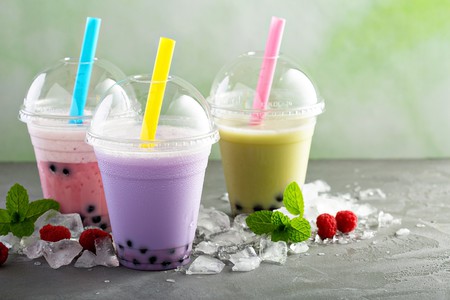 Have you had bubble tea before? Maybe a decade or more ago? Then you’re wayyyyyy ahead of this New York Times writer.

There’s a joke within the NYC media world—one of those “it’s funny because it’s true” types of things—that the New York Times only covers an “emerging trend” once it’s already been in the mainstream for years.

The newspaper has one-upped itself today. Its business section just ran a story on bubble tea, an unfamiliar and shocking new thing the kids are drinking these days.

“Remember the first time you went to a Starbucks, and had no idea what to do? These days, bubble tea, an Asian import, seems to be going through the same consumer learning curve, as entrepreneurs bring their exotic menus to malls and big American cities,” intrepid reporter Joanne Kaufman breathlessly exclaims from her time machine on her way back from the early aughts.

Oh honey. Maybe you should’ve checked the paper’s archives first. You might’ve seen this story from last year declaring bubble tea to be “so 2002.”

What’s the worst aspect of Kaufman’s piece? The cluelessness about something that’s been found throughout the U.S. for at least a decade and a half? Or the casual racism of exoticizing a food that isn’t familiar to a particular middle-class white lady?

But wait. It gets even worse. If you click on the story now, it appears to be titled “Bubble Tea, Long a Niche Favorite, Goes Mainstream in the U.S.” The headline was changed several hours after publication; the NYT had originally gone with (and you can still see it in the URL) “The Blobs in Your Tea? They’re Supposed to Be There.”

Can you even? Because we can’t.

As expected, Twitter is serving up some gems in response.

The Blobs in Your Spaghetti? They’re Supposed to Be There https://t.co/NbkHshiZQp pic.twitter.com/253nFGJvwq

“The stupid headline? It’s supposed to be there” https://t.co/jCKhcV9OCP

I sure won’t be touching that bubble tea stuff until I can get myself an authentic venti Starbucks Bobbalicious with whipped cream.

I guess after discovering buttered rolls, it was inevitable that the New York Times would discover bubble tea https://t.co/8NfnvD3Az9

If only the New York Times had discovered that it was over bubble tea 15 years ago before it discovered bubble tea yesterday. pic.twitter.com/kJGEvD1jyT

are you old and unfamiliar with bubble tea? perhaps you’re so old you forgot what it is. we’re here to pander to you

They… literally think there’s anyone in NYC who doesn’t know what bubble tea is, at this point? I – I just – they – I mean – what?

Next time, New York Times editors, maybe double-check to make sure what you think is an emerging trend isn’t one already declared over in your own newspaper.