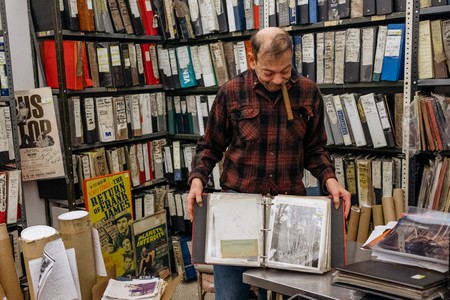 If you want to buy a memento of a movie, Jerry Ohlinger’s Movie Material Store remains the one and only destination in New York City. 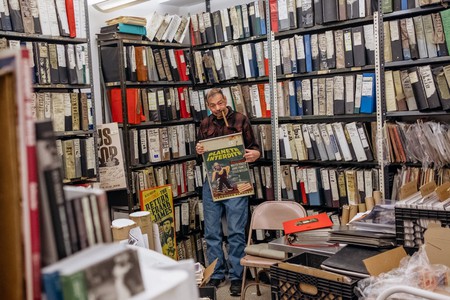 At the top of a steep staircase in a building on West 30th Street resides the biggest treasure trove of purchasable film stills, posters, and other movie marketing items in New York City. Now in its 42nd year of business, Jerry Ohlinger’s legendary Movie Material Store has settled in the Garment District after weathering numerous upheavals and occupying three previous locations.

Rising rents and eBay’s takeover of the memorabilia trade have driven Ohlinger’s competitors out of business, but the 74-year-old New Yorker has kept his business alive through a mix of grit and canniness. 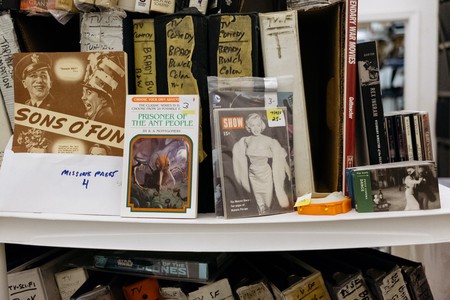 Movie lovers who drop by his store with its overflowing shelves will find themselves salivating. If you’re looking for stills of Buster Keaton or Emma Stone, or from The Empire Strikes Back or Jason and the Argonauts, Jerry’s research assistant Greg will, in seconds, hand over a folder to pore through.

In a recent visit to Ohlinger’s store, Culture Trip sat down to talk with the proprietor, whose inveterate stogie-chomping recalls that of the late director Samuel Fuller. 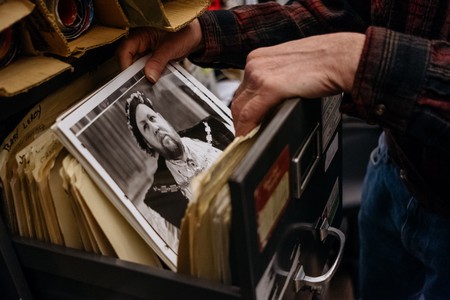 Culture Trip (CT): When did you first become interested in movie memorabilia?

Jerry Ohlinger (JO): It started when I was very little. I used to go to movies with my father on Saturdays and Sundays. We’d go to the big theaters on Broadway and also see the double features on 42nd Street. I was collecting comic books at that time. It wasn’t until about 1955 that I started to collect movie photos and some press books. I didn’t know a lot of the stuff that was for sale existed, or how you could obtain it. You always saw the posters at the theaters, but you couldn’t buy them.

There were a lot of bookstores along Sixth Avenue between 42 Street and 48th, and once in a while they would get photos. I remember the first photo I ever bought was from Walt Disney’s The Three Caballeros [1944] for 10 cents! 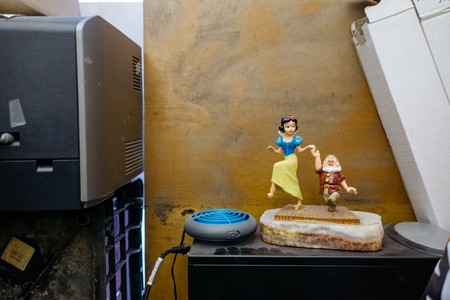 There was a store on 44th Street called Kier’s Celebrity Photos that had photos in the window. I bought a couple of photos there, and then I discovered you could call up the various studios and say, “I’d like to get a set of stills from this movie that’s coming out.” And they would send them to you, no charge. So I did a lot of that. I was already collecting comic books and movie magazines and clippings from newspapers.

CT: When did you start to trade?

JO: I was making good contacts and I found a place that could copy photos very inexpensively, which meant I could either sell the original or swap copies. I also discovered a place in the city called National Screen, which sold posters that were no more than five years old to big theaters, and another place in the Film Center Building that dealt in older titles. I was able to buy a lot of posters there.

I used to go to a lot of the comic book conventions, which was where I really started to sell stuff. That was about 1970. Usually I was the only person selling movie memorabilia. I discovered that people who like comics like movies, too. So it was a good market. I started to travel around the country, and I went down to Texas to this place called the Duncan Theater Exchange, which had thousands of old posters going back to the ‘40s. They would sell them at very low prices compared to New York, so I bought a lot of them. 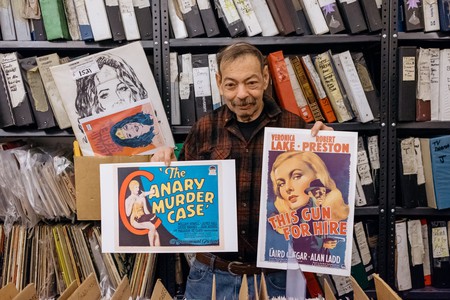 As I bought stuff from people selling their collections, so the inventory got bigger and bigger. Then there was no more room in my apartment anymore, so in 1976 I opened a store at 120 West 3rd Street in the Village. It was a good location because the area attracted a lot of tourists. I then found that, instead of having to wait a month to see me at the comic conventions, the buyers would come down and see me seven days a week.

The next year Star Wars came out, and that changed the business dramatically. People who weren’t normally interested in collecting movie posters or photos suddenly wanted something on this title. It was a phenomenon, and it led to a great increase in business because we were able to satisfy the customers’ requirements.

JO: Absolutely. There are pieces on Star Wars that we might have sold for $100 in 1977 that go for several thousand dollars today. 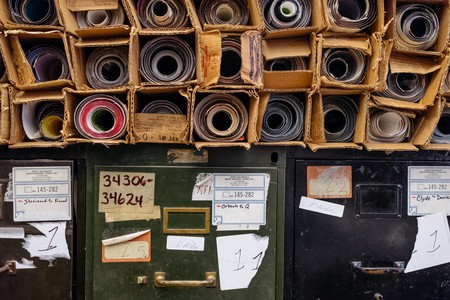 CT: And sci-fi, horror, and fantasy memorabilia has always been popular?

JO: They were always the leaders in customer taste from the early days, and they still are.

CT: A friend of mine who trades film materials showed me some of the beautiful—now costly—stills issued by the German studio UFA in the 1920s. Do you find there’s much call for this kind of material?

JO: I had stuff like that on the Bela Lugosi film White Zombie [1932], which I sold to a guy who appreciated Art Deco design. Mostly what I’ve sold is standard American stuff with a few fringe foreign things here and there. In the early days of the business, most people didn’t like foreign posters because the titles would be in a different language. 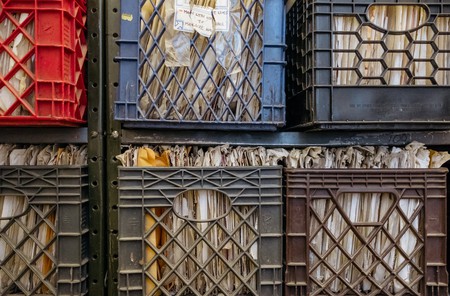 CT: After 20 years you moved from 3rd Street?

JO: Yes, in 1986 I moved to a bigger place on 232 West 14th Street. By then I had a lot more stuff, and I wound up with a warehouse in New Jersey. I guess we had a good reputation because we were open seven days a week and were very busy. On Saturdays we could have as many as eight to 15 people in the store at one time, and on Sundays only a few less. We would need three people at the counter back then. But those days are gone because of eBay. 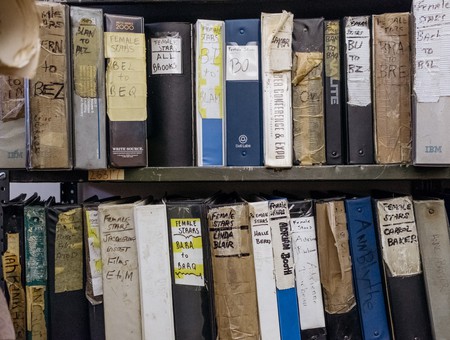 JO: It was the old story. The rent on 14th Street was $5,000 a month, but the building changed hands. The new guy wanted $10,000, but we weren’t prepared to pay it. So we moved to 242 West 35th Street where the rent started at $5,500. The rent eventually went up to $10,000 and then two things happened. One, the landlord wanted more, and, two, business wasn’t as good as it used to be because of eBay. By then, the other stores—Cinemabilia, the Memory Shop, and Kier’s—had closed. In fact, we bought them out. Movie Store News has also gone since then. 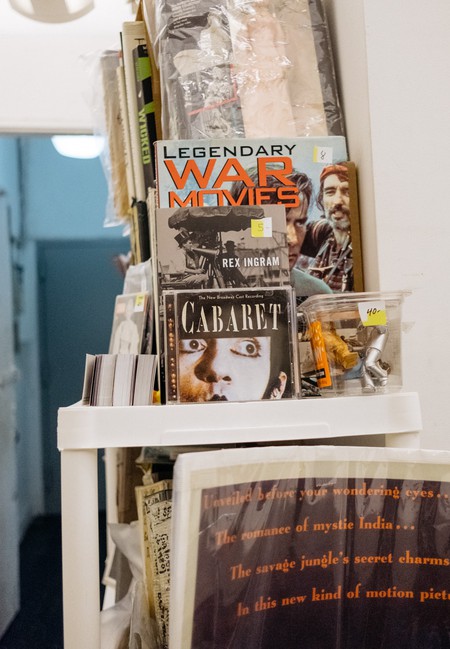 EBay was heavy competition, because the customer could buy stuff for a dollar, or for more than what we were selling it for. If you can’t beat them you’d better join them, so we started putting pieces on eBay, and we found we didn’t need such a big store as our 35th Street store. We just needed a place to store the stuff we were selling on eBay and then make a few casual sales to regular collectors.

They were shopping on eBay, too, so competition was becoming nasty. The recession in 2008 hurt us pretty bad because sales fell. Previous recessions hadn’t hurt us that much because this industry was still growing. As it got more mature, we found we were subject to the whiplashes of economics, so we had to find a cheaper place. The rents in New York City were insane. What was a minor cost before became a major cost, so we moved here in 2014. 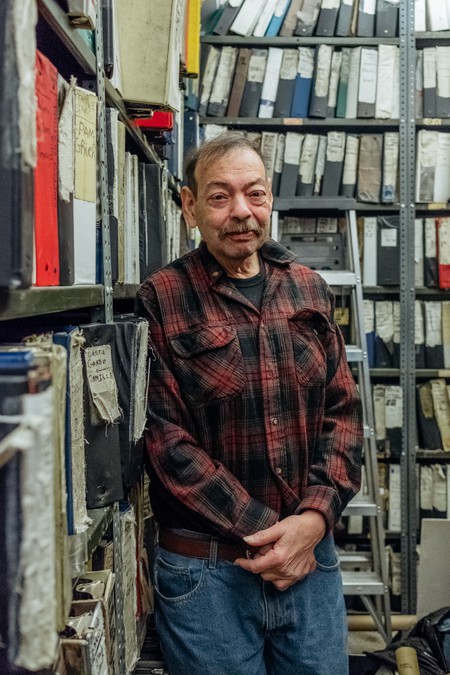 CT: Is eBay your biggest source of business nowadays?

JO: The most expensive thing I’m currently selling—it’s for somebody else—is an original advance poster for The Cabinet of Dr. Caligari. It dates from December 1919—the film was released in February 1920. It’s a shot of the somnambulist and these swirling colors.

GREG (G): It’s the last such poster known to exist in the world.

JO: [The client] is looking for about $200,000 for it. Another expensive item we had was an original Emperor Ming costume that was used in the first and second Flash Gordon serials [1936, 1938]. We got a message on eBay from someone saying, “I’ve got one of those and I didn’t know it was worth that kind of money.” And another guy wrote: “I’ve got one, too.” The studio would make more than one copy of each costume because if somebody spilled coffee on the thing, it would hold up filming. I bought that costume for $1,000 years ago, and it fetched $22,000 on eBay. 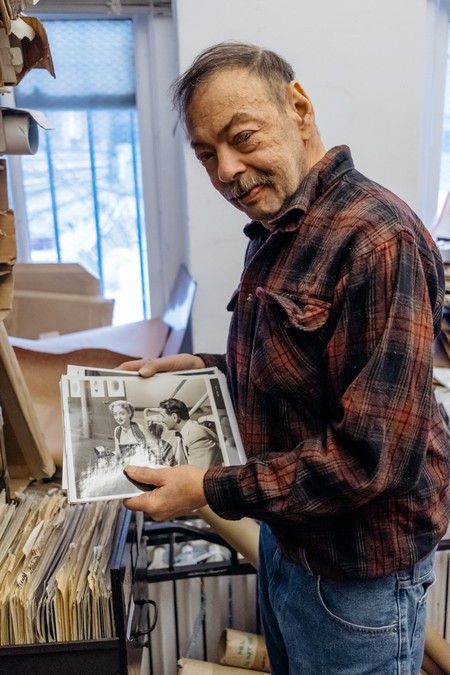 CT: Do you collect anything yourself, Jerry?

JO: Just DVDs. I’ve got a few posters of movies I like: The Tales of Hoffmann [1951], Sinbad the Sailor [1947], The Sands of Iwo Jima [1949]. I don’t collect photos any more. I collected them originally because they were a remembrance of the film. The same thing with posters, though it’s a little bit different because a poster is dependent on the artwork. For me these days, if I’ve got a DVD I don’t need anything else. It covers all my interests.

CT: What about you, Greg?

G: I collect stuff from Alfred Hitchcock or Billy Wilder movies, all the usual suspects—though not The Usual Suspects [1995] [laughs]. And things that I deemed classic before they became universally regarded as classics. When I was in high school, I used to steer my friends toward films that hadn’t become household names yet. I felt like I was the only person in the world who knew things like Seconds [1966] or Point Blank [1967]. It’s strange to think that the poster for Point Blank goes for about $600 or $700 now. 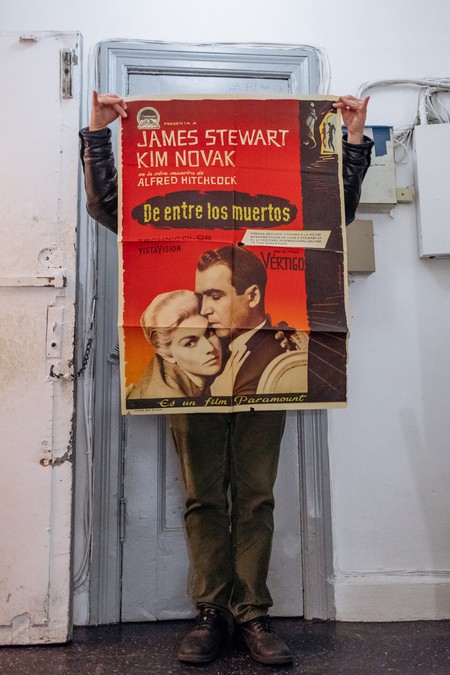 CT: How long will you continue?

JO: It’s the kind of business you don’t retire from. You need a certain amount of knowledge to sell things and you need far more important knowledge in order to purchase things at the right price. That’s the key to staying in business—to be able to replace what you sell. If you can’t do that, then you’re going to go out of business.

CT: This place is an Aladdin’s Cave. I hope you continue for as long as possible. 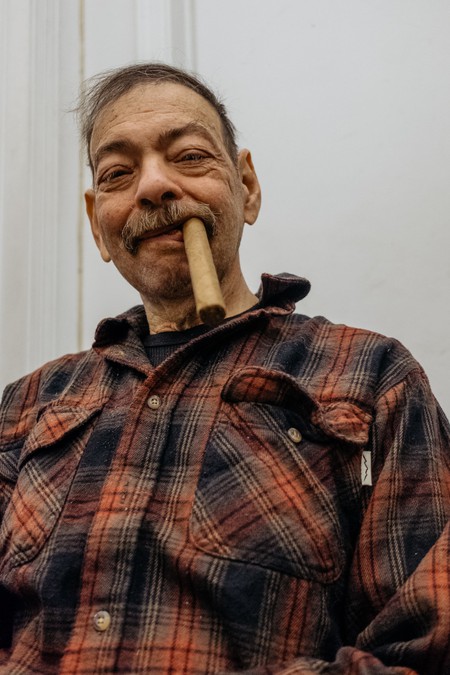