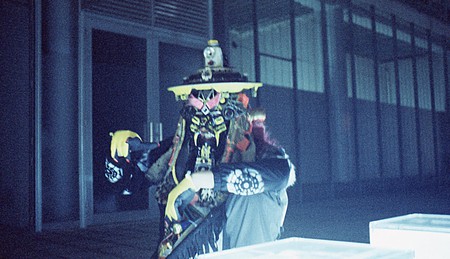 At Red Bull Arts New York’s expansive space on the periphery of Chelsea’s gallery district, an otherworldly retrospective follows the many narratives of cult artist Rammellzee: one of the most faceted and elusive figures of recent New York City history.

He called himself “The RAMM:ΣLL:ZΣΣ,” an adopted name which doubles as the summation of a “military function formation equation.” Rammellzee’s moniker alone indicates a legacy of mythical proportions—one which is certainly justified through the careful aggregation of some four decades of his work across two gallery levels. 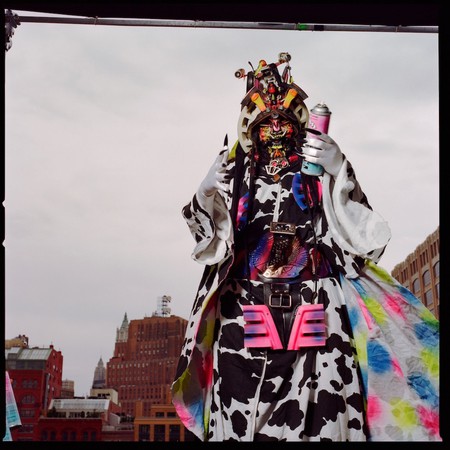 RAMMΣLLZΣΣ: Racing for Thunder, currently on view at the free experimental arts space Red Bull Arts New York, is the largest examination of Rammellzee’s life and work to date. Those who knew the perplexing figure personally have, even after his death in 2010, chosen not to disclose his birth name—or much else about his early life, for that matter—but this comprehensive showcase of his scripture, visual artworks, and music videos upstairs, in conjunction with the handmade costumes he wore during his performances downstairs, lend depth and dimension to an otherwise mysterious and complicated man.

“He was intentionally discursive,” Red Bull Arts New York’s chief curator Max Wolf told Culture Trip from beneath a series of latticed arches akin to a dystopian subway tunnel at the exhibition’s entrance. “A lot of fact and fiction ensconces his legend. Our job was to find out who this man was without dismantling his mythology.”

Born in Far Rockaway, Queens in 1960, Rammellzee rose to prominence in the mid-1970s as a graffiti artist. Street art “represented the embryonic phase of his life,” Wolf explained, “but he would explode creatively in so many different directions.” 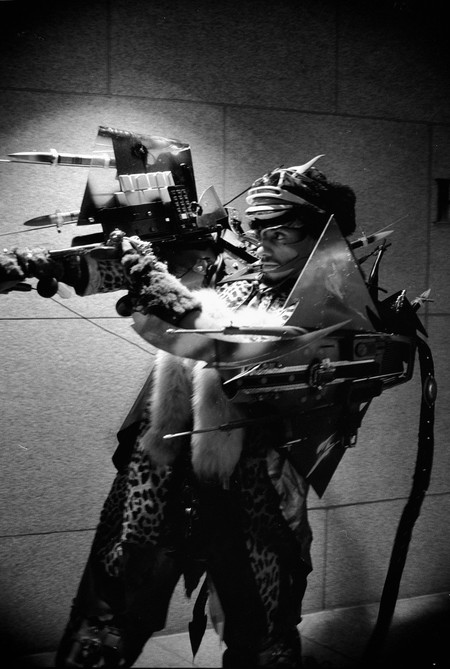 A painter, sculptor, performance artist, costume designer, jewelry maker, rapper, and theoretician, Rammellzee “bent ideas and genders at a time when the machismo tenets of hip-hop disallowed it,” Wolf noted. In fact, he would go on to cultivate an entire ontology and some 20 inconceivably elaborate personas whom he referred to as “the Garbage Gods.” The abstruse reaches of his many unconventional practices, Wolf acknowledged, are perhaps why Rammellzee is lesser known today.

But there was a time when Rammellzee was a New York City legend whose wildly idiosyncratic oeuvre influenced visionaries across disciplines, from graffiti artist Jean-Michel Basquiat to filmmaker Jim Jarmusch and hip-hop group the Beastie Boys. “There was no medium that he wasn’t fluent in,” Wolf mused, and so much of Rammellzee’s sweeping impact was rooted in an entire cosmological narrative that he took it upon himself to tell.

In 1979, Rammellzee transcribed the principles of what he called “Gothic Futurism,” a 25th-century world order in which he laid bare the fallacies of language across seven dizzyingly esoteric manifestos on view at Red Bull Arts New York. As he saw it, “language over the last 2,000 years has been an act of violence,” Wolf informed, explaining that Rammellzee understood language as historically hegemonic. 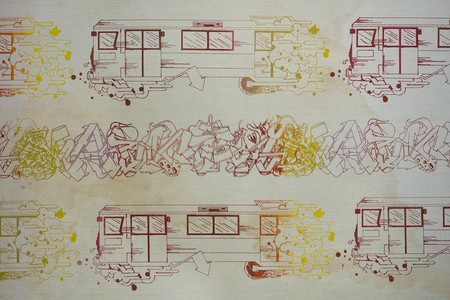 “Rammellzee inherited, from the dark tunnels of the subway, a cosmic responsibility from the monastic scribes of the Dark Ages,” Wolf explained, referring to an order of medieval monks who invented and subsequently communicated through coded calligraphy that the bishops couldn’t understand. Through Gothic Futurism, Rammellzee planned to free language again through freestyle rap, visual art, costume, and beyond—from the darkest underground channels of the subway to the the haute runways of a Valentino show.

“He wanted to turn these letters into tanks, deploy them on train cars through the circulatory system of New York with a viral methodology, and bring on a reformation for diseased society,” Wolf continued. Noting that “he was a voracious autodidact,” Wolf also mentioned that much of Rammellzee’s ontology was rooted in the concepts he learned as a temporary member of the Five-Percent Nation—a black, Harlem-based sect of the Nation of Islam that originated in the 1960s.

With a practice informed by Gothic Futurism, Rammellzee “bucked the preciousness of lyricism,” as Wolf described, through freestyle rap. His vast lexicon also incorporated his world of heavily symbolic visual imagery, and with that, he broke into the contemporary art world. In the early 1980s he produced his first canvas, and by 1986, he was showing in museums. 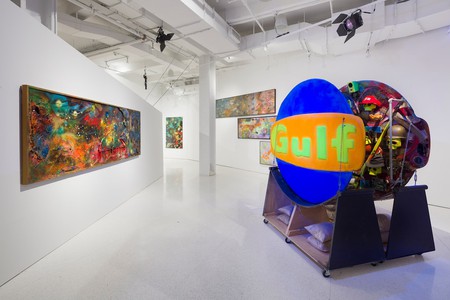 Rammellzee painted; he hand-cut and spray-painted marble sculptures; he assembled found objects, which he petrified in thick layers of epoxy. “There’s a feeling of preservation in a lot of his work,” Wolf noted. “We begin to see a charged power in his found objects. He was all about moving forward, but the epoxy holds everything down.” Furthermore, nearly all of Rammellzee’s painted works glow in the dark. “Because they were born in the dark,” Wolf said, “they have to exist in the dark. Every work has two states.” This becomes apparent when the upper gallery’s lights, programmed according to a circadian rhythm, dim to ultraviolet black light.

By the early 1990s, as his fine art career began to wane, Rammellzee’s personality started to fragment. He became increasingly reclusive and he retreated into his TriBeCa home and studio, which he called the “Battle Station,” where he focused his attention on manifesting these personalities through the construction of exquisite costumes made from innumerable found objects on city streets. 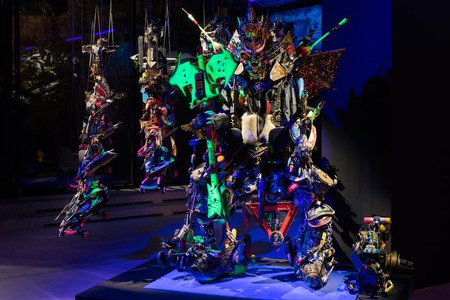 He completed a full-body, nearly 200-pound exoskeleton, The RAMM:ΣLL:ZΣΣ, which he wore to embody his dominant character. On view downstairs, The RAMM:ΣLL:ZΣΣ is “a Hue-man composed of ‘quasar bolt’ material,” according to a printed key available to visitors in the gallery’s foyer. “Special Powers: Engineering ‘gun slinger’ of the ‘letter racer’ class. Exoskeleton growth ‘micro to macro.’ Weaponry: Top Secret. Age: Present wringers’ genetic analysis noted at age TOP SECRET.”

The RAMM:ΣLL:ZΣΣ eventually evolved into “the Garbage Gods,” a universe of characters who run the gamut from good to evil. Rammellzee became “The Duchess,” a 13 billion-year-old “young princess whose kingdom is in shambles;” he became “Barshaw Gangstarr,” the billion year-old “imperial wizard who holds keys to the only books on ‘letter weapon-slaving’ and strike tactics;’ ” and he became “Reaper Grim,” a dual figure of unknown age, both male and female, who “interfered with the passing of the clergy’s dictionary to the populace and place a warning law in it, called ‘grimms law.’ ” 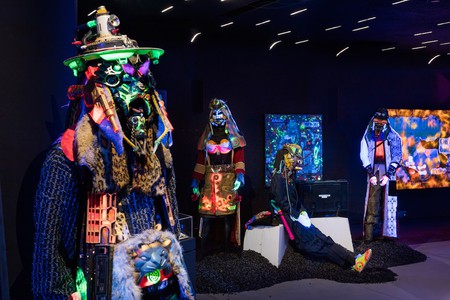 Rammellzee eventually succumbed to Reaper Grim at the age of 49 in 2010. The end of Racing for Thunder showcases Reaper Grim next to a suspended pyramid lit from the center, which the artist believed encapsulated his timeless soul. His final work, titled Life or Death (2009), is an open bag revealing a collage of found objects—perhaps those which he planned to bring with him to the next life. Rammellzee’s death has been attributed to several compounding complications, from a heart attack to failing lungs, but Wolf also noted the toll that working openly with epoxy took on his health. “He thrived off of toxicity,” Wolf said, “but eventually it killed him.”

Amid so many of Rammellzee’s righteous artworks and ancient characters, his presence in the space is still deeply felt.