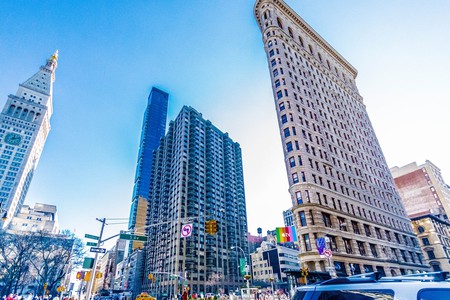 The Flatiron Building is at the heart of Silicon Alley | © Pixabay

Silicon Valley, the area of California synonymous with technology, has lent its name to many cities around the world. Perhaps the biggest tech hub to don the title is New York’s Silicon Alley.

New York has been home to some of technology’s biggest names for a long time, but is not associated with the industry the same way as California. IBM, one of the largest technology firms in the world was founded in New York in 1911, and Bloomberg was created in the city in 1981.

The name Silicon Alley was first used in New York around the mid-90s to group the technology startups found around the Flatiron neighborhood of Manhattan. The Alley runs from Midtown down to Union Square.

It’s not certain who first used the phrase Silicon Alley, but Jason Denmark, a recruiter, is often credited with coming up with the name when he was attempting to bring developers from California to New York. Denmark posted a job advert in February 1995 with the title “NYC – silicon ALLEY.” After that, the name stuck.

The early days of Silicon Alley were known for large parties, big ideas, and brash owners. One of the first major successes for New York startups was Prodigy, a company providing access to the internet via a dial-up connection. The 90s also saw the rise of major internet companies like DoubleClick, Yoyodyne, Razorfish, and The Mining Company (later called About.com) in New York City.

In 1996, venture capitalists Fred Wilson and Jerry Colonna co-founded Flatiron Partners, which became the leading VC firm in New York. The Silicon Alley Reporter was also founded that year, which covered the Silicon Alley scene. The publication was renamed the Venture Reporter in 2001 and sold to Dow Jones in 2003.

The first rise of Silicon Alley ultimately ended in disaster, as the dot com bubble burst in the early 2000s, and in fact some people believe the name should have died along with all the companies that didn’t make it out of those turbulent times. But when the second technology revolution gathered steam in the Big Apple, the name returned.

However, when the revival began in 2003, tech companies didn’t stick to the same areas. Young, hungry tech startups popped up all over Manhattan and other boroughs, and while some still called the Silicon Alley area home, it certainly was not a prerequisite for the startup community — Etsy and Vice Media are in Brooklyn, and E*Trade is in Midtown. For many this means the name should be dropped, as most of the companies have dispersed around the city, but the name will most likely stick for a while longer yet. Besides not being headquartered in an alley, it’s not like any of the major companies are working with silicon either.