The History Of Madison Square Garden In 1 Minute 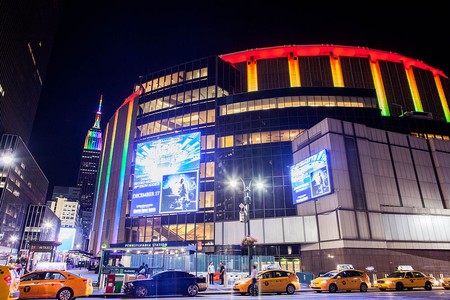 The original Penn Station – the Beaux Arts masterpiece that was arguably the United States’ most famous station – was demolished in 1963, replaced by the Madison Square Garden arena in 1968. This cylindrical Brutalist multipurpose arena was the latest, hippest thing when it made its debut, and its made a name for itself as a lasting modern historical landmark. Few know, however, that the ‘World’s Most Famous Arena’ actually has a unique history that spans back more than a century. We give you the history of Madison Square Garden in one minute.

It all began with a passenger depot building, owned by the New York and Harlem Railroad, located on the corner of East 26th Street and Madison Avenue. Upon moving the depot uptown, the company leased the space to P.T. Barnum, beginning in 1871. Barnum spent the next three years converting the space into a 10,000-seat open-air oval arena, mainly used for circus performances. The space went through several names and owners, each of whom expanded the arena’s portfolio of activities, before William Kissam Vanderbilt took back control from his recently deceased grandfather, Commodore, and renamed it Madison Square Garden. 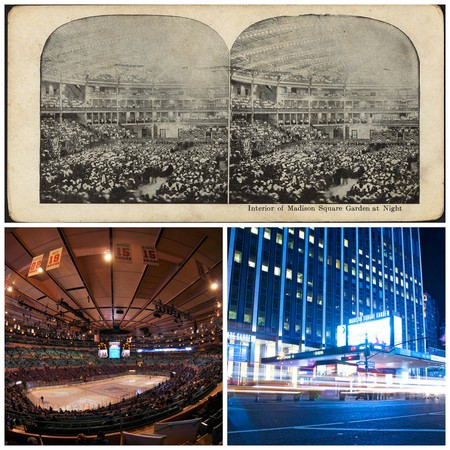 Vanderbilt sold the arena in 1889 due to the many logistical problems associated with an open-air arena. The new owners commissioned the celebrated Beaux-Arts architect Stanford White to design a brand new indoor arena in 1890. White kept an apartment for himself in the upper levels, and the arena he designed would eventually become the site of his own murder at the hands of a jealous husband. The second arena gained further notoriety for hosting major historic events including the annual French Ball, the Ringling and Barnum Circuses, the first indoor professional sports games, like football, and finally, the 1924 Democratic National Convention.

The venue closed in 1925, replaced by an updated indoor arena with a simplistic box-like design by Thomas W. Lamb, a noted theatre architect. Funded by prolific boxing promoter Tex Rickard, the new arena soon garnered the nickname ‘The House that Tex Built.’ This third incarnation was located outside of Madison Square proper, situated on 8th Avenue, between 49th and 50th Streets. Again, the Garden’s activities and teams roster expanded, as did its historical profile; this incarnation was the first home of New York’s world-famous Rangers (NHL) and Knicks (NBA); it hosted rallies for both Anti-Nazi (1937) and Pro-Nazi (1939) groups; it was the location of the memorable campaign speech scene in Citizen Kane; it was also the site where Marilyn Monroe delivered her suggestive rendition of Happy Birthday To You to President Kennedy in 1962.

After Irving M. Felt demolished the original Penn Station, the Garden was moved to its current site, a move that sparked the creation of the New York City Landmarks Preservation Commission, and a debate over the fate of Penn Station and the arena itself that is still ongoing. Despite the hard feelings, the Garden remains active, and is still the site of historic events ranging from the Stanley Cup, to the Playoffs, to Pope Francis’s first US visit, to Billy Joel’s continuous record-breaking residency shows. Even if the arena is moved to make room for a new Penn Station, Madison Square Garden and its impeccable heritage are here to stay.