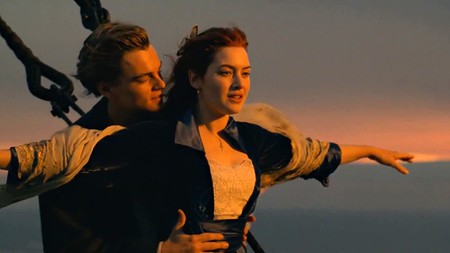 Since its doomed maiden voyage in 1912, the R.M.S. Titanic has remained a fixture of public consciousness and popular culture. The most famous film about it is 1997’s Titanic, but was it more fiction than fact?

Unfortunately, information as to what really happened during the sinking of the Titanic is much like the iceberg that sealed its fate. Approximately only 10 per cent of an iceberg is visible, while the other 90 per cent is underwater. Similarly, only a small percentage of what happened to the Titanic is known, while the rest is unconfirmed theories and complete mystery. 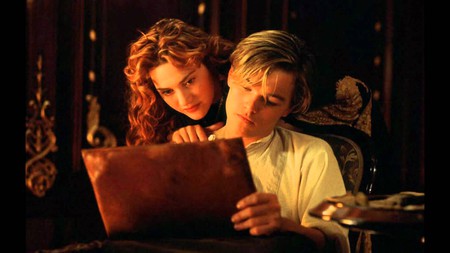 With a running time of over three hours, 90 percent of Titanic focuses on the fictional love story of Jack (Leonardo Di Caprio) and Rose (Kate Winslet) with plenty of distractions (including, ahem, Billy Zane as Rose’s fiancé). Director James Cameron’s version of events favours spectacle over specifics, relying more on heart than history.

Let’s consider what is known about the sinking of the Titanic in order to know what Cameron got right. Following its sinking, several investigations took place, which involved interviewing witnesses and survivors and consulting maritime experts. Not to mention, the countless investigations, books, and research conducted in the hundred-plus years since. 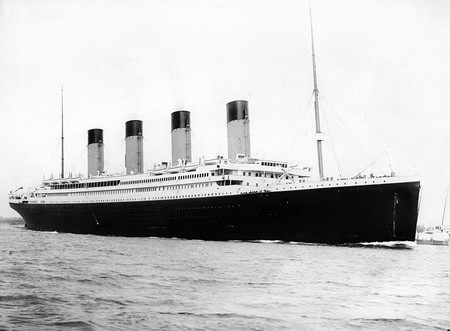 On April 10, 1912, the R.M.S. Titanic departed from Southampton, England, en route across the North Atlantic to New York. It had taken over three years to build, and upon its completion it was considered to be the most luxurious and fastest ship, a marvel of industry.

Its eclectic group of passengers included millionaires, teachers, emigrants, silent movie stars, and industrialists. The ship was a feat to be sure, but it had one deadly flaw. As Cameron depicts in Titanic, the ship was not equipped with enough lifeboats. There were only 16 on board and four “collapsibles,” which only accommodated 1,178 people on a ship with the capacity for 3,300.

Surprisingly, the boats on the Titanic actually surpassed the amount required by the British Board of Trade. It was the largest passenger steamship ever built, but could not ensure the safety of the passengers. 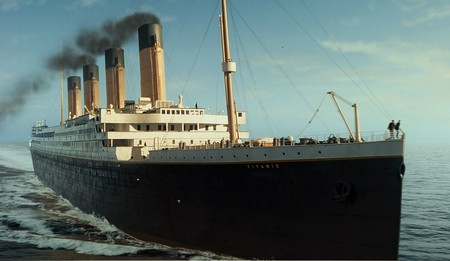 At around 11:30pm on April 14th, the Titanic hit an iceberg, which caused a 300-foot gash on the side of the ship underwater. Based on witness accounts, the moments leading up to and during this collision are well-documented, and Cameron does an accurate job in depicting them.

The night the ship hit the iceberg, the waters were relatively calm, with temperatures near freezing, and it was a clear and moonless sky, conditions which made it difficult to spot the ice. Though the wireless operator received reports of ice from other ships, sailing conditions were seemingly good, so these warnings were ignored.

While the ship was going at the full speed of 22½ knots, a lookout saw an iceberg ahead. As the movie shows, the lookout rang a warning bell, called the bridge, and exclaimed: “Iceberg, right ahead.” The ship was steered away, but it was coming in too quickly to avoid the iceberg completely. The Titanic grazed it, causing pieces of ice to break off and fall onto the ship’s deck, as seen in the film. 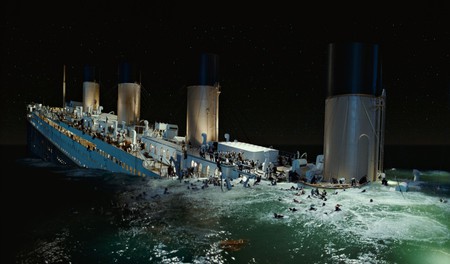 Hundreds of different and intersecting dramas took place aboard the Titanic as it sank: instances of cowardice and bravery, families being separated, and people giving up their spots to stay with or for others (just like Rose stays with Jack).

Cameron attempts to portray the same kinds of incidents. The audience is only afforded glimpses, however, as primary focus remains on the drama of Jack and Rose, including a scene in which Rose rescues a handcuffed Jack from a corridor nearly engulfed by water.

Despite these plot points, Cameron accurately depicts the sense of chaos and panic as the ship sank. He shows how the few lifeboats available were not filled to capacity, with women and children given preference. The ship sunk within three hours in the early morning hours of April 15th. Tragically, more than 1,500 people died out of 2,240 passengers and crew on board. 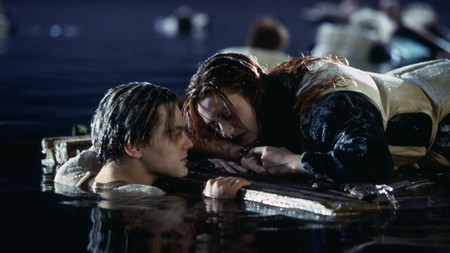 Upon further research, one of the more impressive aspects of Titanic, in terms of historical accuracy, is its secondary or supporting characters, many of which are based on real people. Victor Garber plays Thomas Andrews, the chief designer of the Titanic. Just like in the film, as the ship was sinking, the real Andrews was last seen staring at a painting of the Titanic on a wall in the First Class smoking room, where he is presumed to have died. Kathy Bates plays Molly Brown, a first-class passenger who helped people board lifeboats, kept them calm, and even tried to get lifeboats to turn around and pick up more people.

In addition to these supporting characters, Cameron includes subtle nods to other people who were on the ship. Isidor Straus, the owner of Macy’s (originally R. H. Macy & Co), and his wife Ida were also passengers on the Titanic. Due to his old age, Isidor was offered a seat on a lifeboat, but refused special treatment. Ida didn’t want to leave him, so the two of them went to their room where they died together.

During a sequence in Titanic, Cameron shows what people are doing simultaneously around the ship while it’s sinking. One shot is of an elderly couple holding each other on their bed, crying while their room is filling with water. Though brief, it is one of the most poignant and heartbreaking moments of the film, and, according to the film’s credits, is in fact Isidor and Ida Straus.

Much of Titanic is based on theory rather than certainty. This is due in part to Cameron’s narrative decisions. The film depicts third-class passengers being forcibly barricaded below deck, preventing them from reaching the upper decks and lifeboats. However, historian Richard Howells argues that there is no historical evidence to support this. He claims that the gates seen in the film weren’t meant for a shipwreck, but other reasons like preventing the spread of infectious diseases.

According to the British Inquiry Report of 1912, the Titanic did not lock passengers below deck. The gates were in accordance with American immigration laws, separating emigrants in third class so that when they arrived in New York, the ship could drop them off at Ellis Island to be processed before docking in Manhattan. The report also claims that many did not want to leave or part with their luggage when the boat was sinking. Though there were class tensions, Cameron exaggerates in his version of events, showing passengers being shot and killed for dramatic effect. 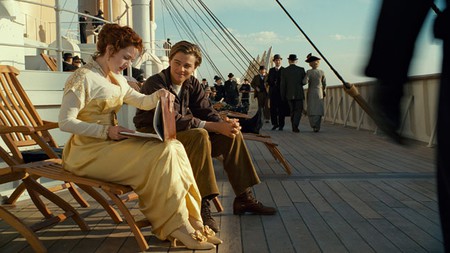 Cameron consulted historical experts while making Titanic, but he did not always take their advice. One famous story is that the ship’s band remained on deck playing “Nearer, My God, To Thee” to lift people’s spirits. This is portrayed in an earlier film about the Titanic, A Night to Remember (1958), but it may not be true. One survivor claimed that the band played popular ragtime music, but that kind of music wouldn’t have the same emotional effect in a film. According to Paul Louden-Brown, a member of the Titanic Historical Society who consulted on Titanic, Cameron loved the scene with the musicians in A Night to Remember and thought it was so beautiful that he copied it, despite its questionable historical accuracy.

Cameron favoured dramatic effect over historical accuracy in the portrayal of Bruce Ismay, president of the company that built the Titanic. Ismay survived, but there are conflicting reports as to how. Some survivors claimed that he boarded the first lifeboat, while others say that he was ordered to board one by the chief officer. 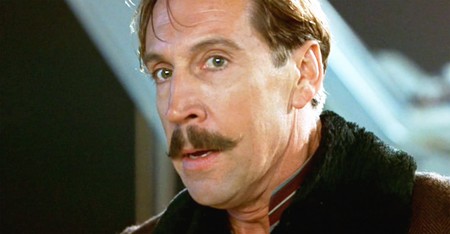 According to the British Inquiry Report, Ismay got in a boat after he helped many passengers board. Ismay was considered a coward and lived in shame afterwards. In many film adaptations, he is portrayed as a villain, Cameron’s included. In Titanic, Ismay (Jonathan Hyde) pressures the captain to go faster so that the ship will arrive early in New York and get good press.

Later, while the ship is sinking, he helps people into lifeboats, and then in a panic, he cowardly boards one himself with First Officer William Murdoch (Ewen Stewart) looking on in disapproval. Louden-Brown advised Cameron that he believed this to be an unfair portrayal of Ismay but claims that Cameron refused to change the script, arguing that the negative portrayal would fulfill audience expectations (apparently more important to Cameron than historical accuracy).

Since making Titanic, Cameron has continued to investigate the Titanic. In the process, he has admitted some aspects of his film that he now knows to be inaccurate. In the film, the ship splits in half after a few hours before sinking entirely, which is correct. The bow sinks first, while the stern bobs vertically at an almost 90-degree angle before plunging straight down into the water, with Jack and Rose gripping a railing.

In 2012, however, when the film was rereleased in 3D, Cameron admitted in an interview with Nightline: “There was actually probably a moment when it was standing quite proud of the water, but it wasn’t quite as dramatic and as static as we showed in the film.” Once again, Cameron privileged drama over accuracy.

In addition to misrepresenting facts, Cameron also consciously left out information. One of the most significant omissions is the Californian, another ship that was near the Titanic as it was sinking. Even though its crew saw the rockets fired by the Titanic as a signal for help, its captain decided not to go and help.

It is not surprising that Titanic did not receive an Academy Award nomination for its screenplay. Though Cameron has written and directed an epic fictional love story set during an iconic historical event, the former unfortunately occupies a majority of the film. Though the chemistry between Leo and Kate is palpable onscreen, Titanic compromises historical accuracy for its romantic fantasy. In considering how media has skewed people’s knowledge of the sinking of the Titanic, Cameron’s film is just the tip of the iceberg. 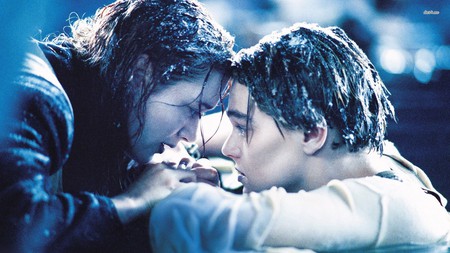 Want to learn even more about the Titanic’s history and James Cameron’s big screen adaptation? Check out the following resources:

Together with James Cameron and Bob Ballard, National Geographic Channel marks the 100th anniversary of the sinking of the Titanic.

James Cameron and a panel of the world’s leading Titanic experts investigate how and why the presumed “unsinkable” ship really sank.

James Cameron discusses with Nightline (ABC News) aspects of his 1997 film that he now knows to be historically inaccurate.