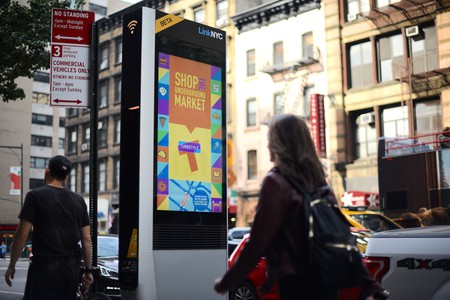 Payphones became so obsolete so quickly that we rarely pay any attention to the few that are left. In New York, it’s even possible to overlook the fact that many have been replaced by Wi-Fi capable, phone charging, tablet-wielding kiosks all over the city.

LinkNYC is a network of slim, tall booths that offer a number of services to visitors and residents of New York. Perhaps the most useful is free, fast WI-Fi access, that lets you stay connected free of charge when you’re out and about in the city. The Links also provide free domestic phone calls, maps, directions, a USB port for charging, and a 911 button for emergencies.

The project to install the network has been ambitious. “When LinkNYC is fully built out it’s going to be the largest, fastest municipal Wi-Fi network anywhere in the world. So we definitely have a go big or go home mentality. It’s an incredible resource both for New Yorkers and visitors, at no cost to the taxpayer,” says Kate Blumm, Assistant Commissioner, Communications & External Affairs at NYC Department of Information Technology & Telecommunications, in an interview. 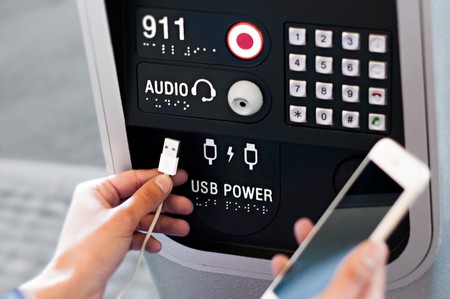 Phones can be charged at the stations | © LinkNYC

The reason there’s no cost to New York’s residents is that the whole network is funded by advertising. The Link kiosks have two digital screens on either side, which can display advertising, among other things. They’re provided by the City of New York and a New York-based consortium called CityBridge that includes chip maker Qualcomm and Intersection, a company funded by Google’s parent firm Alphabet.

“Old payphones had static advertisements on three sides, and our new Links have digital advertising on two sides, and we split the revenue 50-50 [with the city,]” says Ruth Fasoldt, Director of External Affairs at LinkNYC. “Our 50% also pays for the entire project, and we also use the 55-inch screens for other things beyond advertising. We have content up there that can be useful for residents and visitors alike, subway updates, weather updates, fun facts about New York City, and we’re growing that content all the time.”

The program, which started rolling out in 2016, hasn’t been without its controversies. There was a problem with users accessing pornographic content on the browser later that year, which was fixed by limiting the sites accessible via the kiosk. And there have also been privacy concerns raised, particularly as the booths have forward-facing cameras.

Citizens opposed to the cameras began putting post-it notes on the cameras, only for them to be taken down. The New York Civil Liberties Union has also complained about the LinkNYC network, saying in a letter to New York Mayor Bill de Blasio: “the NYCLU remains concerned about the vast amount of private information retained by the LinkNYC system and the lack of robust language in the privacy policy protecting users against unwarranted government surveillance.”

LinkNYC has been operational since 2016 | © LinkNYC

But despite these concerns, the project has aimed to bring connectivity to every New York resident and visitor. “The Mayor has said publicly and is 100% right—the internet is like water in 21st-century New York City,” explains Blumm. “It’s not a luxury, and not just access to internet, access to high speed internet. Adults need it to look for jobs, and to manage their resources, kids need it as part of their education. Every New Yorker and visitor deserves the right to have it.”

In order to make the kiosks more visible to busy New Yorkers, several campaigns have been launched to attract attention. One of the more recent examples was on Valentine’s Day, when people were encouraged to tag photos of them and their Valentine on Instagram, to be in the running to be featured on the side of a Link kiosk. There were also plans to arrange for visitors and residents who intended to propose to do so via a message on the side of a Link.

Aside from these types of campaigns, the main goal for LinkNYC in the future is to expand the network. “We’re still in the third year of an eight-year rollout. It will keep growing. You’ll be able to walk pretty much the whole of Manhattan while being connected to this Wi-Fi the whole time. We have 1,300 links that are live across the five boroughs so far, and we’ll have thousands more. We’re already up to 3.3 million devices having connected, which is larger than Chicago. It’s really exciting to see where we’re going,” says Fasoldt.