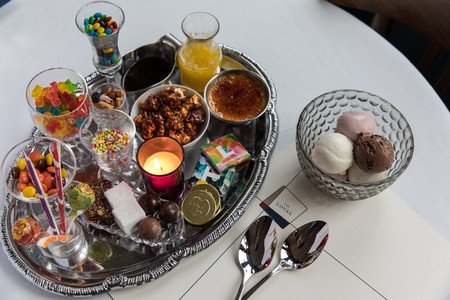 The "Sundae Set" at The Loyal | © Dillon Burke

The current must-Instagram food item is a massive helping of ice cream accompanied by piles of candy treats.

There’s a new phenomenon you’ve no doubt been seeing on your Instagram feed. It’s likely you haven’t seen it in person, though—it’s available primarily at restaurants where reservations are near-impossible to get. If that alone weren’t an inhibiting factor, the price certainly could be.

We’re talking about the large-format DIY ice cream sundae for two. In general, it’s a few scoops of ice cream in a bowl, surrounded by an assortment of candies and accompanied by a tureen or two of sauces, generally chocolate and/or caramel. You’re expected to assemble it yourself; in fact, that’s half the fun.

It’s literally the exact sundae you had in mind as a kid—the one you declared you’d make for yourself when you grew up and didn’t have anyone telling you “no.”

In New York, we first saw it at 4 Charles Prime Rib. This restaurant is the first NYC offering from a Chicago-based restaurateur and, nearly a year after it opened, it remains virtually impossible to secure a reservation before 10 p.m.

Here, the Sundae Royale comprises three scoops of ice cream in a single bowl, plus a generous dollop of whipped cream and a maraschino cherry, surrounded by a dozen types of candy and cookies—but just a few morsels of each. Among them, you’ll likely find an Oreo cookie, quartered; precisely eight M&Ms five Junior Mints; half a Twix bar, sliced into small bits; a couple of Nilla wafers, broken into pieces; a half-dozen mini marshmallows of the type you used to sprinkle into a mug of hot cocoa. On the side, you’ve got a tureen of chocolate sauce that tastes like rum-spiked Hershey’s. You add whatever toppings you like to assemble the ultimate candy-filled sundae, and are encouraged to go maximalist with it.

At first glance, it seems over-the-top indulgent. So much candy! So many choices! And you don’t have to eat any but your very favorite kinds! But let me be frank: The candy assortment is nothing you couldn’t assemble from your office’s vending machine, or pilfer from a child’s trick-or-treating spoils. And it doesn’t exactly amount to abundance; nothing’s offered in quantities greater than those of a Halloween “fun size” candy bar. Not exactly a bounty for the premium price of $21. The sundae is said to be for two, but I’m definitely not the only person who’s torn through it with a dining companion and still had room left over for my share of a massive slice of pie. I liked the sundae’s concept, but I was left wanting more.

And Then There Were Three ❤️🍨💥

This summer’s arrival of The Office upped the ante. Another Chicago import, this ultra-luxe throwback cocktail bar from the superstar team of chef Grant Achatz and restaurateur Nick Kokonas offers a similar DIY sundae for an eyebrow-raising $35. With this one, each person gets their own scoops of vanilla ice cream and shares a tray of toppings. Ours had fewer topping options than at 4 Charles, but we were given massive quantities of each item.

Here we had what must have been a pound each of M&Ms, Reeses Pieces, and chopped Skor bars, along with a veritable army of Gummy Bears. On the side, there were glass pitchers of rich chocolate and caramel sauces, and sliced bananas and strawberries, and a fluffy pile of whipped cream topped with two high-end Luxardo cherries. It was a whimsical finish to an evening that had begun with Achatz’s famed “black truffle explosion.” A typical Achatz dish this was not—it didn’t involve any of his culinary wizardry; you could easily assemble it yourself from a trip to your local bodega—but it did surprise and overwhelm with sheer quantity.

And then came The Loyal, the newest spot from John Fraser, the chef who’s also behind Dovetail, Narcissa, and Nix. At this restaurant, open at this point only for a couple of weeks, the DIY “Sundae Set” is presented a bit differently—namely, on a silver tray with the toppings in all different types of decorative glassware. And it is, triumphantly, sized for two very hungry people.

You’re given six scoops of ice cream—two each of vanilla, chocolate, and strawberry. I’m told the toppings change frequently; on my tray there were a gravy boat of chocolate fudge sauce and a carafe of pineapple sauce, and an extravagant array of glass jars and bowls holding various candies similar to what 4 Charles and The Office offered, plus caramel corn and malted milk balls and chocolate-covered pretzels. It included things like Pixy Stix and Chupa Chups and chocolate rocks and fluffy cubes of marshmallows. There’s even an entire canister of whipped cream at your disposal. Want to add some chocolate? You’ve got both foil-covered chocolate coins and fancy chocolate squares from Dylan’s Candy Bar.

This was the obscenely indulgent sundae I’d been hoping for. It seemed to have been assembled with creativity and care. These were treats you had to go at least slightly out of your way to find, and not simply pick up at the local bodega; the marshmallows were house-made. And it evoked true childhood nostalgia. (When was the last time you had Pixy Stix? I was eight.) It seemed like a bargain for $20.

Now, before you go drop large amounts of money to get—and Instagram—one of these assemble-it-yourself sundaes, remember: Each one of these spectacularly photogenic desserts is nothing you couldn’t assemble yourself at home in a few quick minutes, given perhaps ten bucks and a trip to the corner store. Or by buying a pint of Haagen-Dazs and ripping open a few packets of Halloween candy and arranging them on trays. They’re all just a ton of toppings—some more common than others, depending on where you go, but nothing you can’t get your own hands on with some minor effort—arranged nicely and served with a few scoops of ice cream.

Their perceived luxury is in the feeling of abundance they evoke with simple comfort foods. And in these times, when each day seems to arrive with news that makes the previous day’s tragedy seem minor and quaint, the exorbitant cost of these ice cream-plus-candy treats might be a relatively low price to pay for a brief regression to childhood and the accompanying feeling of security. It might be enough to make you happy, if just for a moment.