The Difference Between the World's Climate and Its Weather 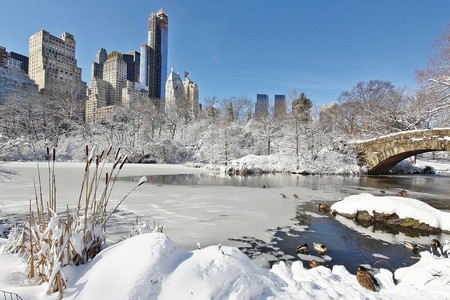 At the end of 2017, Donald Trump, the President of the United States, tweeted a late entry for most ignorant statement of the year, welcoming the impact of global warming because it happened to be cold. So, for Donald, any supporters who believe him, and the rest of us who want to accurately explain why he’s wrong, here’s the difference between weather and climate.

As 2017 draws to a close, the weather on the east coast of the U.S. is pretty chilly. New York, for example, could experience its coldest New Year’s Eve on record. That fact prompted Donald Trump to tweet the following:

In the East, it could be the COLDEST New Year’s Eve on record. Perhaps we could use a little bit of that good old Global Warming that our Country, but not other countries, was going to pay TRILLIONS OF DOLLARS to protect against. Bundle up!

This tweet is wrong on so many levels, it’s hard to know where to start. But one of the more depressing faults is that it legitimizes a view held by a lot of climate change deniers, when they look out of their window, see it’s cold, and conclude global warming is made up.

Way back in 2005, NASA published an article that clears this up. The main difference is time. “Weather is basically the way the atmosphere is behaving, mainly with respect to its effects upon life and human activities. The difference between weather and climate is that weather consists of the short-term (minutes to months) changes in the atmosphere,” the NASA website reads.

Climate, in contrast, tracks the weather in one area over a period of years or decades or even centuries. When you step out of your home in the morning and consider it to be chilly, that doesn’t mean the world is getting colder. In fact, all the evidence points to the exact opposite of what Trump is tweeting about.

The year 2017 is expected to be one of the five warmest we’ve seen on record. The warmest year ever recorded was 2016, and the second warmest was 2015, followed by 2014. Three consecutive warmest years on record suggests the planet as a whole is warming up, far more than the random observations of a man on a single day.

And Trump may be wise to heed the warnings of his own administration. A study published in November by GlobalChange.gov found that the global annually averaged surface air temperatures increased by around 1.8°F (1°C) over the past 115 years. “This assessment concludes, based on extensive evidence, that it is extremely likely that human activities, especially emissions of greenhouse gases, are the dominant cause of the observed warming since the mid-20th century,” the report found.

Climate change is going to be one of the most worrying issues for humanity over a long time; it will affect the way we travel, work, and live. “Rising global temperatures are expected to raise sea levels, and change precipitation and other local climate conditions,” NASA said back in 2005. “Changing regional climate could alter forests, crop yields, and water supplies. It could also affect human health, animals, and many types of ecosystems. Deserts may expand into existing rangelands, and features of some of our National Parks and National Forests may be permanently altered.”