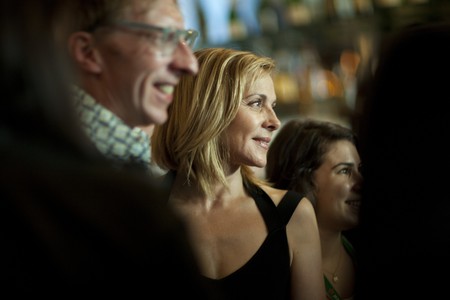 New York City is home to numerous film festivals, from international headliners like the Tribeca Film Festival to lesser-known events that shine the spotlight on deserving up-and-coming artists. We give you the complete guide to film festivals in NYC.

Theater
Facebook
Email
Twitter
Pinterest
Copy link
Share
The NYC International Film Festival showcases both international and national films and serves as a platform for aspiring directors, actors, screenwriters, and others involved in the film industry to network and showcase their productions. This festival offers talented amateurs the opportunity to get their names and their films in front of established professionals, further assisting in their future success by subsequently distributing the films that were showcased. Awards include Best Actor and Actress, Best Director, Best Leading Narrative, and more. The festival takes place April 25th through April 29th at the DGA Theater.

Bridge, Cinema
Facebook
Email
Twitter
Pinterest
Copy link
Share
The NYC Independent Film Festival aims to discover new concepts and showcase fresh ideas that have otherwise been overlooked by the popular culture. Running as a non-profit organization, the NYC Independent Film Festival wants to bridge the gap between the established and the up-and-coming. Those who enter can win awards for Best in Independent Cinema, Best Music Video, and Best Animated Work.

Cinema
Facebook
Email
Twitter
Pinterest
Copy link
Share
The Williamsburg Film Festival focuses on the neighborhood’s famous hipster scene and aims to incorporate this unique brand of NYC culture into the creative medium of film. Like the NYC Independent Film Festival, WillFilm is about shining the spotlight on relatively unknown indie films in a city that loves the new, but refuses to sacrifice quality in art. This year’s festival, which takes place at the Wythe Hotel, will run from November 17th to November 20th.

Arguably the best-known film festival in the country, the Tribeca Film Festival aims to ‘enable the international film community and the general public to experience the power of film by redefining the film festival experience.’ Founded in 2002 by Jane Rosenthal, Robert DeNiro, and Craig Hatkoff, the Festival’s mission is to help filmmakers reach both national and international audiences, while supporting both New York City’s and the global film community.

Founded in 2013, the Chelsea Film Festival highlights ‘global issues’ through documentaries, feature films, and short films. Strictly a platform for new talent, the Festival highlights works by up-and-coming filmmakers, but it also aims to enlighten audiences. Don’t miss this year’s Festival from October 13th to the 17th, and check out last year’s Grand Prix Winner for Best Feature Film below.

The Lower East Side Film Festival

The Lower East Side Film Festival is a unique cultural experience for audiences. While tickets are required, some screenings are free to the public (though RSVP). The LES Film Festival aims to showcase up-and-coming film talent, and it supports filmmakers without large budgets. This year’s festival will take place from June 9th to the 18th. Check out the list of venues here, and last years winner of the Prix D’or below.

The Greenwich Village Film Festival’s mission is unique; it not only celebrates the beauty of this beloved New York City neighborhood, but it also showcases the creativity that’s born from it. Greenwich Village has long been associated with New York creativity, and the Festival aims to preserve that artistic charm by showcasing hyperlocal talent. The event will take place in late October, but in the interim, find last year’s winner for Best Short Film below.

Cinema
Facebook
Email
Twitter
Pinterest
Copy link
Share
The Brooklyn Film Festival aims to highlight local cinema amongst an international audience. It also aims to revive the pastime of going to see a film and to increase film interest and awareness to Brooklyn audiences through international, local, and independent films that you may not have access to otherwise. Last year’s Grand Chameleon Award went to Sweaty Betty,and this year’s festival will take place between June 3rd and June 12th at various Brooklyn venues.

The African Film Festival has been a New York City film staple for 26 years. The Festival aims to highlight and celebrate diversity in the film industry and create a deeper understanding of African culture in an effort to enrich the lives of filmmakers and film-lovers alike. AFF celebrates African art, literature, and culture through film, and it aims to shine the spotlight on African artists who aren’t visible enough in mainstream culture. Some of the films selected this year include The Cursed Ones, ’76, and Price of Love. This year’s Festival will take place throughout the entire month of May at various venues.

Building, Park
Facebook
Email
Twitter
Pinterest
Copy link
Share
This year will mark the second annual Nordic International Film Festival. The Festival unsurprisingly focuses on Nordic films, with a special section for classic Nordic themes from old productions. While this Festival shines the spotlight on Scandinavian culture, it also aims to bring awareness to global independent films with strong storylines. The NIF will take place at the Nordic Center from October 28th through October 30th.

Cinema
Facebook
Email
Twitter
Pinterest
Copy link
Share
The SoHo International Film Festival focuses on the art of cinematography, while simultaneously encouraging both established and up-and-coming filmmakers to enter the contest. This Festival features films from all over the world, giving audiences a fresh and global perspective of this dynamic art form. The event includes networking for aspiring professionals, as well as the opportunity to win Best Short Film, Best Documentary, and Best World Film. Last year’s winners included All Stars,which won Best Showcase Film Feature, and Muted for the Special Jury Award. The festival will take place from June 9th to June 16th at the Village East Cinema.
Give us feedback