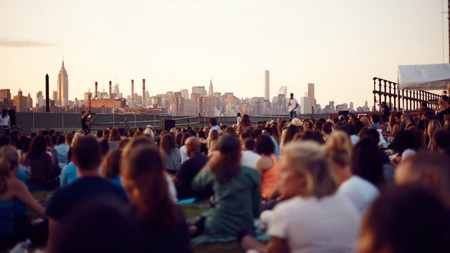 New York’s mindful gathering The Big Quiet is traveling around the US in October 2018, in the first mass meditation tour of its kind.

Since its launch in 2015, The Big Quiet has taken over some of the city’s most famous landmarks, bringing New Yorkers together for an evening of live music and meditation.

There was the inaugural gathering of 2,000 people in Central Park. A rogue flash mob meditation inside the Oculus to commemorate 9/11. A congregation on the Garden floor of Madison Square Garden. Even a watery sound bath underneath the Blue Whale at the American Museum of Natural History. Now The Big Quiet’s founders, Jesse Israel and Lauren Billie, are packing up their singing bowls and meditation cushions and taking their mass mindfulness experience across the country.

The tour begins in Chicago, in the Horticulture Hall of Garfield Park Conservatory (October 9 2018), then heads to the West Coast with stops at San Francisco’s Grace Cathedral (October 10) and the Los Angeles Public Library (October 14). The final leg lands in Austin, Texas, at the Umlauf Sculpture Garden (October 16), before hosting a special homecoming meditation back in New York – data and surprise venue to be confirmed. 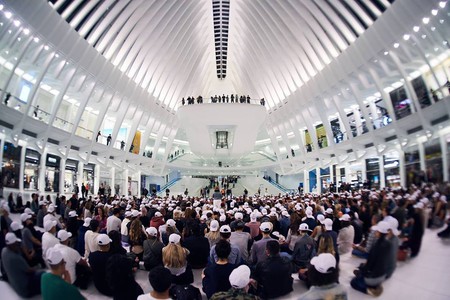 According to Google Trends, every stop on The Big Quiet’s tour appears on a list of the 20 US cities using meditation-related search terms most frequently.

Meditation The Big Quiet-style is a social occasion. There are healthy meals and drinks (think boozy kombucha), choirs, sound baths and talks. The meditation itself is kept appropriately short and sweet to cater to rookie meditators as well as more seasoned ones. It’s what Israel and Billie call “the blend” – a not-so-esoteric meeting of mindfulness and mainstream culture.

Tickets for The Big Quiet tend to sell out fast once a new event is announced. Sometimes there’s even a wait list, so if you want the chance to attend this memorable experience – thousands of strangers sat cross-legged in mutual silence – buy sooner rather than later.