The Best Hotels to Book Near the Statue of Liberty, New York City/New Jersey 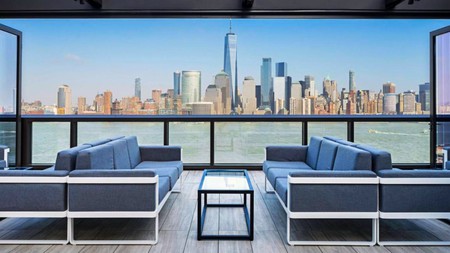 You'll get stunning views of the Manhattan skyline at some of these properties near the Statue of Liberty | Courtesy of Hyatt House Jersey City / Booking.com

Pick the right neighborhood and you’ll have big-city fun as well as easy access to New York’s indelible landmark. Book one of these convenient hotels with Culture Trip near the Statue of Liberty.

The Statue of Liberty may well be New York’s most recognizable symbol. It’s also on a small island in New York Harbor with national-park status, so there’s nowhere to stay. The good news: excellent lodgings fill Manhattan’s Financial District and surrounding neighborhoods – as well as the state of New Jersey, just across the Hudson River. A short boat ride will get you out to the 151-foot green lady. When you return, there’s great drinking and dining in neighborhoods including Tribeca, Chinatown and the Lower East Side. Here are the best places to stay. 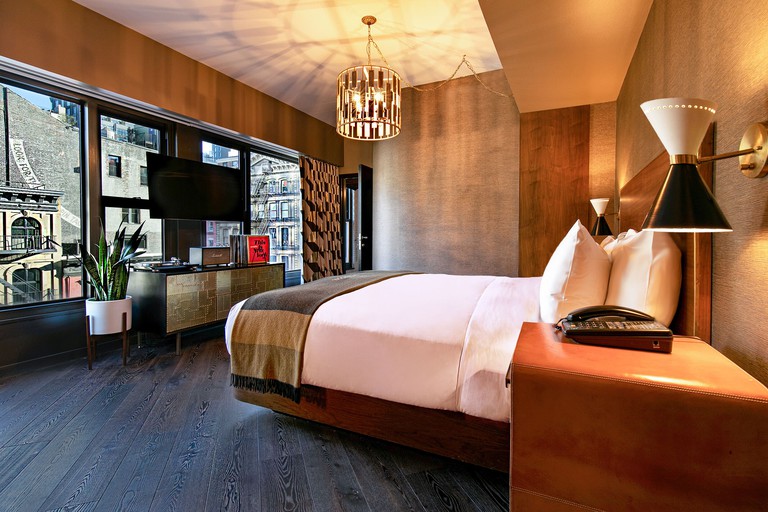 Courtesy of Roxy Hotel / Expedia
The Roxy is a groovy boutique hotel, with its own arthouse cinema attached. Snug among the converted industrial buildings of Tribeca, it has a brassy, art deco-influenced design reminiscent of the Roaring Twenties in New York. The rooms, with hardwood floors and mid-century furniture, are even more stunning. The Statue of Liberty ferries are a three-stop subway ride away, and you’re within close reach of Soho’s shopping streets as well as Chinatown’s sizzling haunts. 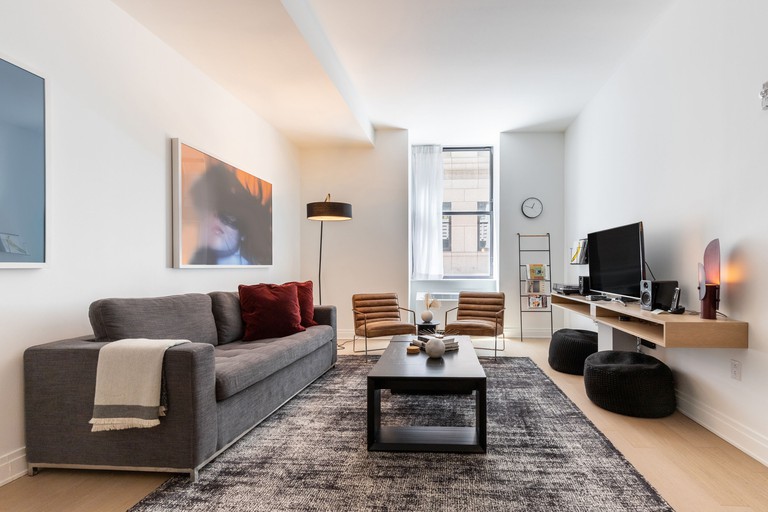 Courtesy of Mint House at 70 Pine / Expedia
Here’s a luxurious spot just a block from Wall Street and a brisk walk to the ferries – Mint House presents seriously spacious, sharply modern apartments with full kitchens, catering for between two and six guests. Amenities are a cut above many other hotels around: there’s a two-floor gym, bowling alley – even a golf simulator, all in-house. For foodies, there’s the excellent Black Fox coffee shop, as well as Michelin-starred restaurant Crown Shy. 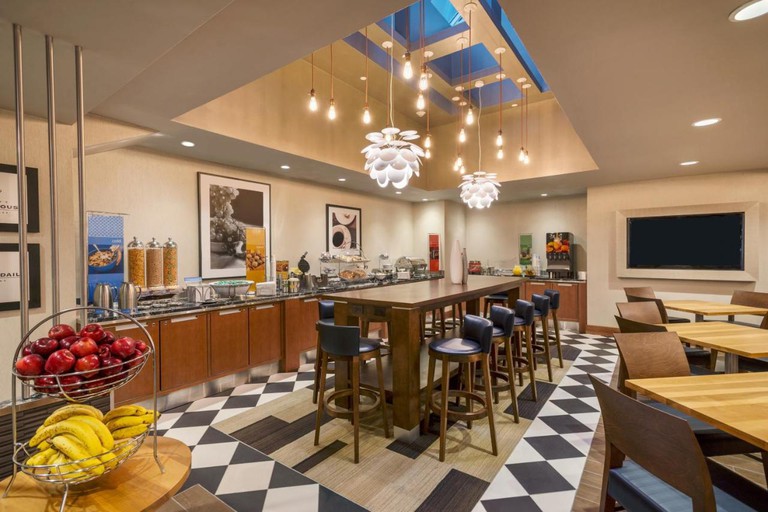 Courtesy of Hampton Inn Manhattan/Downtown-Financial District / Booking.com
Not to be confused with the Hampton Inn Seaport one mile away, this hotel is about as close as you can possibly stay to the Battery Park ferry terminal, where boats to the Statue of Liberty depart. Check in and check out the cozy rooms painted with warm colors, with reasonable rates depending on your dates. With complimentary breakfast, a fitness room and business center, all your basic amenities are covered, too. 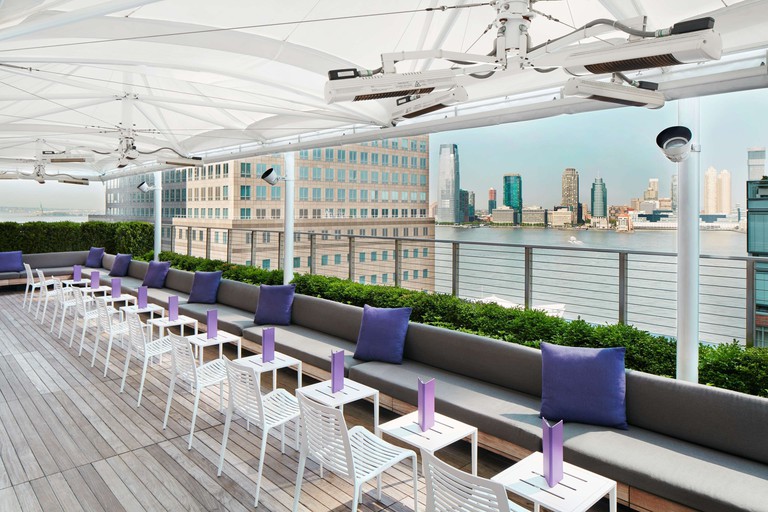 Courtesy of Conrad New York Downtown / Expedia
This high-end Hilton property rises right alongside the Hudson River waterfront, on the west side of Manhattan – and it’s just two minutes’ walk to trendy Tribeca. The hotel’s 463 rooms focus on spacious suites, many of them delivering views of either the river or New York’s glimmering skyline. With some 30,000sqft of event space – including a ballroom – it’s also a great candidate for functions. If you’re staying in the warmer months, be sure to make a date with the hotel’s seasonal rooftop cocktail bar, overlooking the harbor, and raise a glass to Liberty. 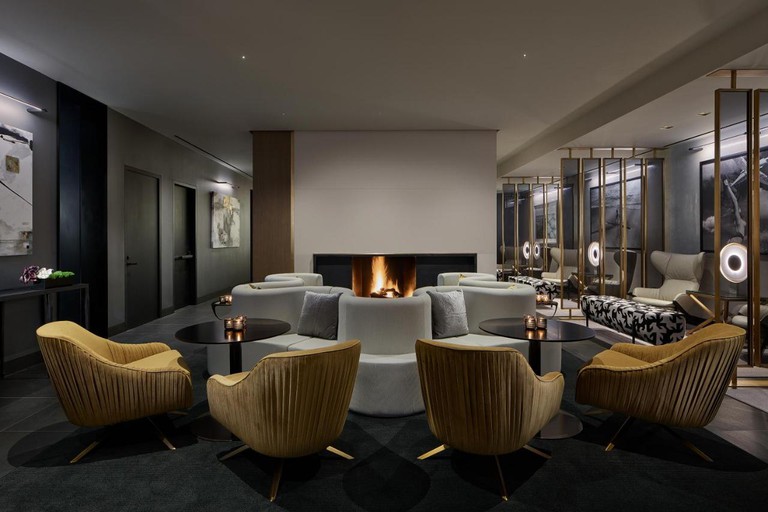 Courtesy of Smyth Tribeca / Booking.com
With a location at the heart of Tribeca and its cobblestoned streets, the fun, fashionable Smyth strikes a great balance: it’s close to essential sightseeing including the 9/11 Memorial, and is also super-convenient for shopping and restaurant nights in Tribeca, Little Italy and Chinatown. The hotel recently reopened after an overhaul – expect bright, bold, modern rooms in minimalistic, neutral tones. New in-house dining and drinking should be up and running by late 2021. 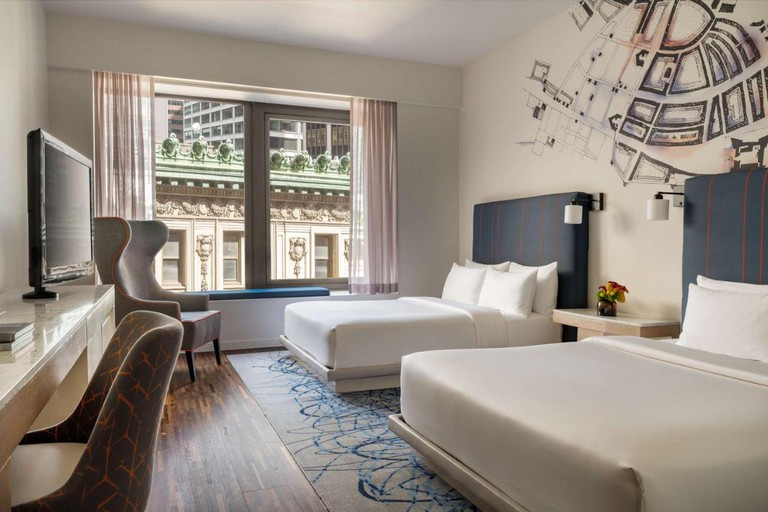 Courtesy of Andaz Wall Street / Booking.com
The 253-room Andaz is a hip brand under the major-league Hyatt umbrella – as you might expect, the hardwood floors, high ceilings and rain showers across its rooms lend this outpost a distinctly boutique vibe. With a Wall Street location and plenty of meeting space, it’s an excellent option if you want to mix a little business with your pleasure. Best of all, it’s just a short stroll to the Statue of Liberty ferries. Top tip: the hotel has its own beer garden, pouring tasty craft brews from the Bronx Brewery for an unbuttoned crowd. 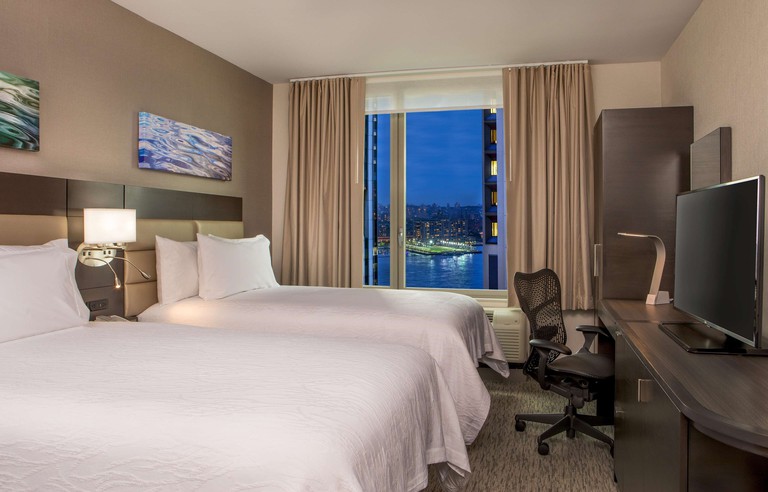 Courtesy of Hilton Garden Inn Financial Center/Manhattan Downtown / Expedia
This is a surprisingly affordable accommodation option, given its prime Financial District location. Expect a no-fuss Hilton location that’s just the ticket if all you need in New York is a clean, friendly place to crash between deep dives into the city. It also has basic amenities, including a gym and meeting rooms. You’ll find it at the very southern end of Manhattan, just a one-minute walk from the ferries for the Statue of Liberty and Ellis Island. Close by are other sights such as Wall Street and the 9/11 Memorial, too. 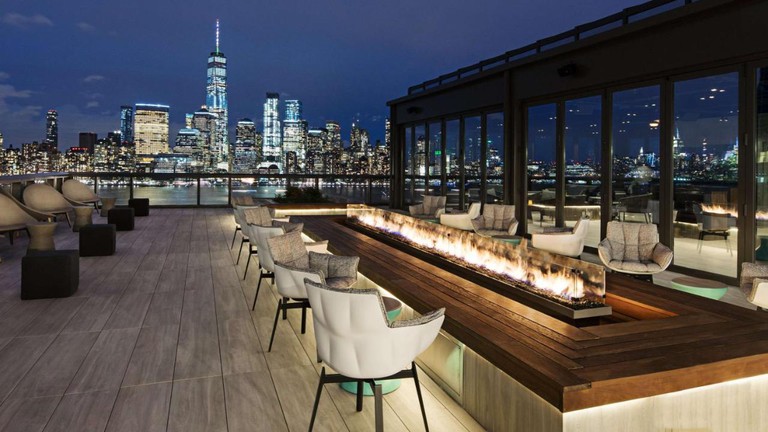 Courtesy of Hyatt House Jersey City / Booking.com
This Hyatt location is not in New York: it’s actually in Jersey City, a buzzy, smaller place a short and comfy boat ride away from the Statue of Liberty. It’s also just one stop on the PATH train into NYC. Stay here, across the river from Manhattan, and you’ll enjoy unique views of the skyline from its rooftop bar. Some of the hotel’s 258 gleaming, modern rooms share that unforgettable outlook, and the sizable suites – plus some rooms – have fully equipped kitchens.

Looking for a different Manhattan pad to rest your head? Book into one of the top hotels near Central Park now with Culture Trip, or opt instead for a stay at one of the best hotels with pools in Manhattan, and enjoy the skyline in style. While you’re here, don’t miss out on any of the best outdoor activities in the Big Apple, and make the most of Brooklyn and its unique neighborhoods. And make sure you stop off at the best restaurants for lunch in between. For more options, discover our guide on the best hotels in Elizabeth, New Jersey, and book now on Culture Trip.